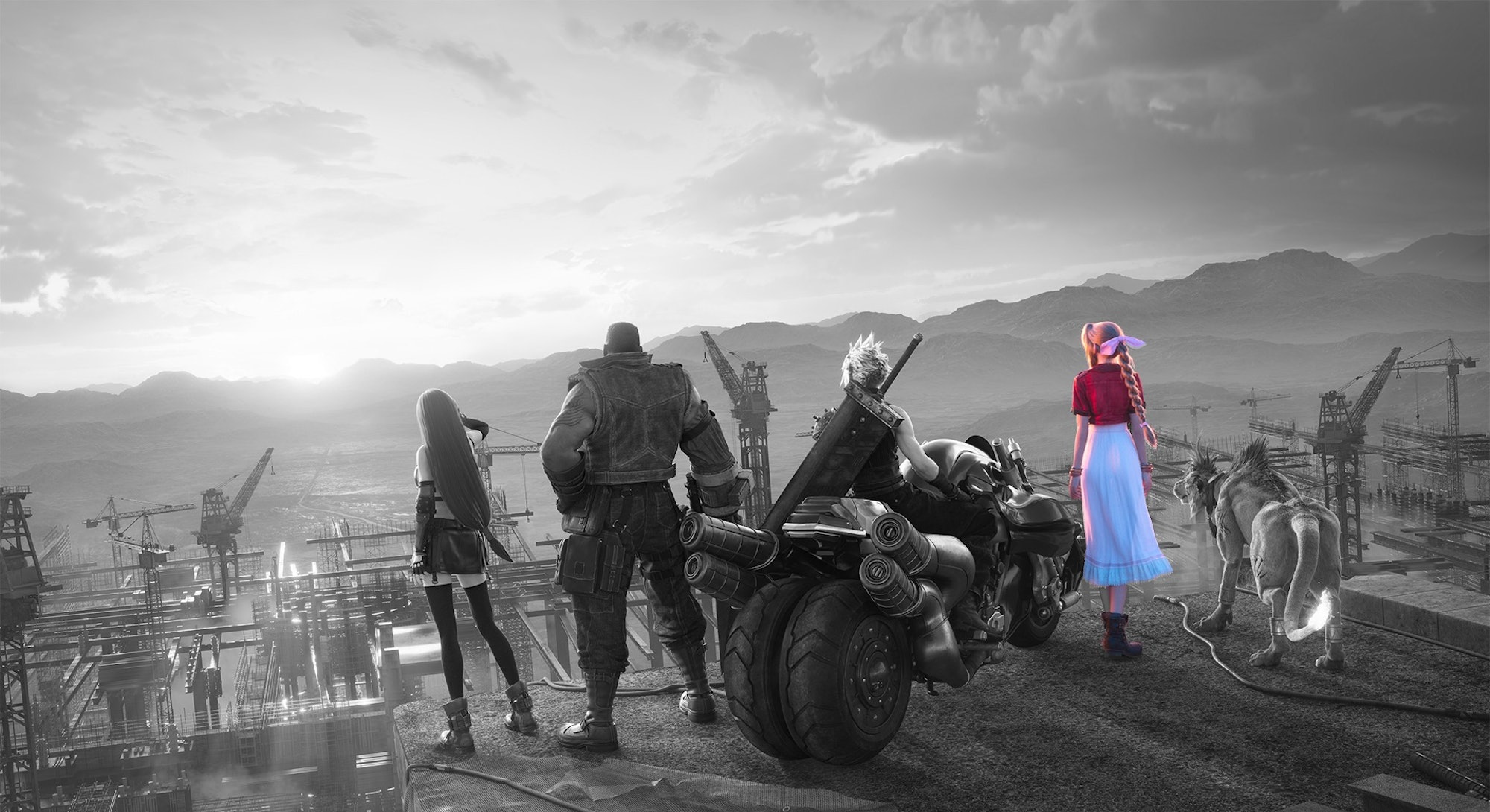 Our double-wide in Hayden, Alabama was perched next to a pair of gleaming, white water towers.

I daydreamed about climbing up top, like Cloud and Tifa in Final Fantasy VII, and hiding from the world around me. I spent a lot of my childhood in a home being ridiculed and abused by my step-dad. My mom, sister, and I lived with him in that trailer, up a long gravel road.

I yearned for a life where I wasn’t mocked for being queer and different. Games offered an escape from a world full of name-calling and broken promises. For a long time, I believed I was worthless. I felt hopeless, and my stomach constantly ached with the pains of depression and anxiety. Diving deep into fantasies where characters were determined to save the world from certain doom allowed me to escape the reality I often didn’t feel strong enough to face.

I first played FF7 around its release in 1997. I was seven years old, and I never made it out of the Shinra Building. When I rediscovered the game years later, it became a light of hope in my world. Cloud, Aerith, and Tifa weren’t just party members, they were my friends. At the time, I didn’t have many, and I wasn’t convinced I needed them.

Not only was the game a welcome distraction, but it also showed me what a powerful tool friendship can be. At the start, Cloud is too cool to make friends with anyone but eventually lets his guard down. They all do — in their own ways, in their own time — because they find a cause to rally around.

But more than anyone else, I found myself drawn to Aerith.

Aerith is the heart and soul of the Final Fantasy VII universe. Despite her demise at the end of the first disc, she holds the cast together until the very end. Her love for the entire Planet, particularly for her friends, touches everyone — even people she never gets a chance to meet. At the end of the game in the Northern Crater, Cloud reminds everyone that Aerith was “smiling to the end” and that “something stopped her” from returning to the Planet. That something was her dedication to preventing the end of the world.

Throughout the game, Aerith’s kindness helps show others their worth. From the moment she hires Cloud as her bodyguard, all the way up to their date at Gold Saucer, she shows him that everyone deserves kindness and a little bit of fun — even broken people with traumatic pasts.

During their gondola ride, Aerith says, “I want to meet you.” She means the real Cloud. It’s a revelation for our spiky-haired protagonist, who spends so much of the game trying to avoid who he really is: an ordinary Shinra grunt who couldn’t make the cut for SOLDIER like his hero, Sephiroth.

Seeing someone so unabashedly kind, despite her mother’s untimely end and the experiments Shinra conducted on her, showed me that I didn’t have to succumb to the abuse I endured from my step-father. I could continue being kind to others even when I felt like the world around me was crashing down. When I witnessed my younger sister being abused, I found the courage to take her under my wing. I’d try to make her laugh by reenacting scenes from our favorite Nickelodeon shows, and I’d comfort her when our step-dad called her names related to her weight.

I battled things no kid should have to face: abuse, absent parents, and self-harm ideations. But FF7 helped me understand the power of resilience, in part through Aerith’s love for nature and the flowers in her “sacred place” in the Sector 5 church. The yellow flowers she grows are lilies, known for their resilience and ability to bloom even in harsh conditions. Aerith’s ability to cultivate flowers even in a broken-down building in the slums mirrors the way she cultivates kindness in the people around her.

Now, as an adult, I see the deeper meaning of those flowers. Even after she was gone, Aerith saved the world and touched those who loved her. Her dedication to it all, despite her many challenges, helped me hold on when I was a kid.

I chose to be resilient. I chose to survive. And I chose to be kind and compassionate to those around me, despite everything. There were days when my sister and I would get locked outside in the sticky July heat with one allowed bathroom break. I’d be forced to wear ankle weights because I walked too heavily, or I’d get smacked in the head for chewing “too loudly.” There was also, of course, the intermittent name-calling and inappropriate sexual comments. It sometimes felt like Sephiroth’s Meteor was barreling right toward me.

When I’d find myself sobbing in my bedroom or shower wishing I wasn’t alive, Aerith helped me find the will to continue forward with kindness.

Aerith’s unwavering kindness and open heart allow her spirit to live on with the rest of FF7’s heroes. She’s absent from more of the story than she is around, yet her presence persists even dozens of in-game hours later. Even if you were to remove the arc of Meteor’s impending doom and Aerith’s Holy Materia, her life still mattered long after her death.

It’s something I try to mirror in my own life. I try to move through my days by showing kindness in small ways: a smile here, a compliment there, or even a hug. My philosophy is that everyone deserves kindness. You don’t know what someone might be going through to make them act out.

Video games eliminate characters — even main characters — all the time. It’s happened in The Last Of Us, Bioshock, and Red Dead Redemption. But Aerith’s fate is very different. It sends shockwaves through everyone, especially Cloud.

Immediately after she falls to the ground, Cloud expresses his immense grief:

“Aerith is gone. Aerith will no longer talk, no longer laugh, cry, or get angry. What about us? What are we supposed to do? What about my pain? My fingers are tingling. My mouth is dry. My eyes are burning!”

This isn’t the sort of emotional outpouring you’d see from the cool mercenary we meet in the first hours of FF7. Yet his words underscore that her absence leaves the party with an awful, howling grief that they slowly learn to live with. Sure, the edges soften, but Aerith’s absence will always be there. At the same time, that absence allows her role in the story to be so rich and meaningful.

Aerith grew flowers in the slums to brighten lives and spread happiness to others. That’s why I connected to her so much as a kid. I was living in a broken home in my own slum. Now, with Final Fantasy VII Remake, a new generation is able to discover the incredible storytelling and characters of FF7. I’m confident more people will be touched by her kindness like I was at my darkest point.

Like Aerith says in Remake: “We need to make the most of the time we have — to live our lives the way we wanna live. Every minute, every moment matters.”

Kindness goes a long way when you’re hurting, even if it comes from a video game character. So, please, live your life. Just remember to be kind.

FF7 Week is an Inverse celebration of the 25th anniversary of Square's landmark 1997 RPG.