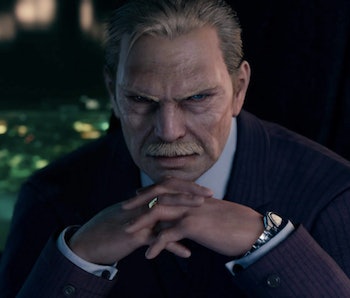 As VG247 pointed out shortly after the game's release on April 10, FF7 Remake resurrects one of the franchise’s most bizarre fan theories from 2003. It places Final Fantasy VII and Final Fantasy X in the same universe, only hundreds – if not thousands – of years apart. It's either a big troll from someone at Square Enix, or somebody genuinely wants everyone to think this is true.

But first, we want to hear from you! What does Mako smell like in Final Fantasy VII Remake? Tell us what you think in this poll.

Rather late in FF7 Remake, as you infiltrate the Shinra Headquarters and take a stroll through the company's lavish museum, you can find further evidence supporting the theory. Take a closer look at that old monochrome photo, showing a group of employees in front of a Shinra factory. Sitting front-and-center is a man sporting what looks like the mask worn by the tech-obsessed Al Bhed named Shinra from Final Fantasy X-2.

Yeah, it's a bit heavy-handed, but the visual connection now seems more overt than ever before.

In Final Fantasy X-2, Shinra is a young tech prodigy who wears a full-body brown onesie with green mittens and a visored mask. The mask is pretty much identical to the one worn by the employees alongside the Shinra executive in the image from FF7 Remake.

At one point in FFX-2, Shinra character examines the mystical place called the Farplane, where the souls of the dead go in Spira (the world of FFX and FFX-2). “With a little work, we could probably extract the energy in usable form,” he says … of the souls. Figuring out how to do it would take “generations” and potentially drain the universe of its life force, but they’d be able to harness an incredibly potent finite resource. Anyone who’s spent even just a few hours with Barret in FF7 Remake knows that Mako is the lifeblood of the planet, and anyone who’s played the original full game also knows that he’s not wrong.

The entire business ethos of Shinra Inc. risks destroying the planet just to make loads of Gil. The wider implications of Shinra the Al Bhed's long-term plan somehow seems even more sinister. Harvesting FF7's magical oil-equivalent doesn't seem nearly as bad as harvesting the energy from souls, but anyone who's played the original FF7 knows that this is essentially what's happening when Shinra harms the Lifestream by extracting Mako from the planet.

The concepts behind the Farplane and the Lifestream are remarkably similar, so what's really going on here?

The makers of FF7 Remake probably put this Easter egg into the game to fuel theories that Shinra from FFX-2, or more likely one of his descendants wearing a similar mask, became the founder of the Shinra Corporation. In either case, there’s still an obtuse continuity at play here. Someone from Spira might've figured out how to use this soul energy to travel to different planes of existence, through time, or into alternate worlds, one of them being that of Final Fantasy VII.

The common thread behind the scenes in all this is scenario writer Kazushige Nojima, who’s worked on all of these games. In the Final Fantasy X Ultimania books, he suggests that FF7 takes place thousands of years later. In a “Making Of” video for FFX, developer Yoshinori Kitase — the director of the original FF7 and a producer on FFX, FFX-2, and FF7 Remake — refers to this whole theory as Nojima’s unofficial “secret history.” Whether or not it'll be officially canonized in any capacity remains to be seen, but it's still a pretty wild theory to grapple with right now.