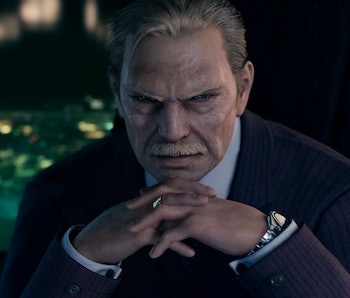 Final Fantasy VII Remake is finally here, and it's an absolute blast for longtime fans and newcomers alike. As you might expect, expanding an eight-hour segment of the original game into a 40-hour standalone experience means you'll spend a lot more time exploring the city of Midgar and getting to know the people who live there, whether its the hustlers of the slums or the well-heeled residents of "topside." Frequent references to Shinra's recent war with Wutai are one of the biggest story changes in FF7 Remake. This war was pretty easy to miss in the original game, though it was explored in greater depth by later FF7 spinoff games. Here's what you need to know, and some speculation about what it could mean for the story still to come.

Light spoilers for the original FF7 and Remake ahead.

In the first few hours of FF7 Remake, you're gonna hear a lot of references to a place called Wutai. The nation is Midgar's sworn enemy, they're rumored to be involved with Avalanche, and pretty much everyone from the slums to Shinra H.Q. can't stand Wutai. If you're familiar with the original FF7, but not particularly well-versed in the spinoff games, comics and movies, this is going to be a little confusing.

In the original game, this is a distant city inspired by the aesthetics of Edo-period Japan. (That's a fancy way of saying it's The Ninja Town, which every 1990s RPG was seemingly legally required to include, along with a prison break and a sewer dungeon.) Well after leaving Midgar, Cloud and his pals go to Wutai when a girl named Yuffie steals every piece of Materia they own. The "Materia hunt" sidequest was notoriously infuriating to OG fans, because it is entirely possible to get stuck on the boss here and be unable to progress the story. (You don't actually have to go to Wutai at all, even though most players do, because it allows you to recruit Yuffie. It's an entirely optional area.)

The original game references this war only very briefly, and it's easy to miss it entirely. Aerith's mom Elmyra makes a passing reference to it, as does Yuffie in the optional Wutai sidequests.

In Crisis Core, the 2007 PSP spinoff set a few years before the events of FF7 story, we learn more about Shinra's efforts to put a Mako reactor in Wutai. This is where Sephiroth makes his reputation as SOLDIER's most formidable warrior. Wutai loses the war along with the military might it once had, then essentially becomes the "Ninja Town" tourist trap from the original game.

Wutai's only one small town in the original game, but it casts a very long shadow in FF7 Remake. With the next installment leaving Midgar behind, it's likely the sequel will see a dramatically expanded version of Shinra's biggest rival. The city itself will likely be far larger, and the island it occupies may include more towns and landmarks.

It's very likely nothing about Wutai will be optional in the FF7 Remake, but a central part of the story. We'll see if there's any truth to those rumors that the nation is supporting Avalanche's efforts to bring down Shinra. We might see some flashbacks to the destruction that made Sephiroth so legendary.

We'll almost certainly see a more somber, serious side to Yuffie, who will likely be a mandatory character this time around. Her father's the figurehead ruler of Wutai, and she's not happy about her home town's tourist-trap status. We'll likely learn more about their relationship, as well as Wutai's history. Hopefully she lets us keep our Materia collection this time.