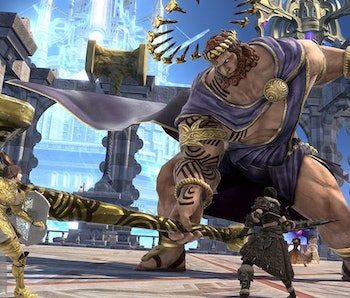 Alliance raids are always some of the most exciting content in Final Fantasy XIV, as the 24-man dungeons feature some incredible boss encounters and unique mechanics. The last two alliance raids have featured crossovers with both NieR and Final Fantasy Tactics, but the new one for Endwalker, titled Myths of the Realm, features original content that dives into the lore of the pantheon of gods known as the Twelve. Patch 6.1 adds the first section of the Myths of the Realm raid, known as Aglaia.

Here’s everything you need to know about unlocking FFXIV’s latest alliance raid, and what to do with the rewards.

How to unlock the Myths of the Realm: Aglaia alliance raid

The first step to unlocking Myths of the Realm is to finish the entire Main Scenario of the FFXIV’s Endwalker expansion. After that, you’ll need to follow the 6.1 MSQ through five different quests until you finish the quest “A Brother’s Grief.” At that point you’ll see a new icon in Old Sharlayan for a quest called “A Mission in Mor Dhona,” which you can get by talking to the “Fresh-face Student” at X: 9.1, Y:11.4. Simply follow this questline and you’ll shortly gain the ability to head into Aglaia, whether it’s through matchmaking or with a party.

There are two more requirements — a job at level 90 and an average item level of 565. If you’re having trouble meeting that item level, your best bet is to earn some Tomestones of Aphorism and Astronomy, which can be exchanged for high-level gear at the Tomestone Exchange in Radz-At-Han (X: 10.8, Y: 10.4).

These Tomestones can be gained by completing level 90 dungeons, trials, and raids and using the Duty Finder with a level 90 character. You can also gain the Tomestones as rewards for completing Wondrous Tails and Heaven-on-High.

The main rewards for completing Aglaia is the level 590 gear that you can gain through drops. However, keep in mind that until the release of Patch 6.2 you’ll only be able to get one piece of gear each week, until the weekly reset on Tuesday mornings. Other drops include the Wind-Up Azeyma minion, the Nald Triple Triad card, and a couple of orchestrion rolls.

There is one more unique reward with Aglaia as well, as once per week when you complete the raid you’ll get an Aglaia Coin. These coins can be exchanged for Radiant Twine and Radiant Coating, which are both used to enhance equipment purchased with Allagan Tomestones of Astronomy. In order to exchange the coins head to Radz-At-Han and talk to Nesvaaz (X:10.6, Y:10.0). Once you’ve exchanged the coins talk to Khaldeen (X:10.9, Y:10.4) to exchange them for Augmented gear. Of course, you’ll need the base pieces of equipment first in order to augment them.