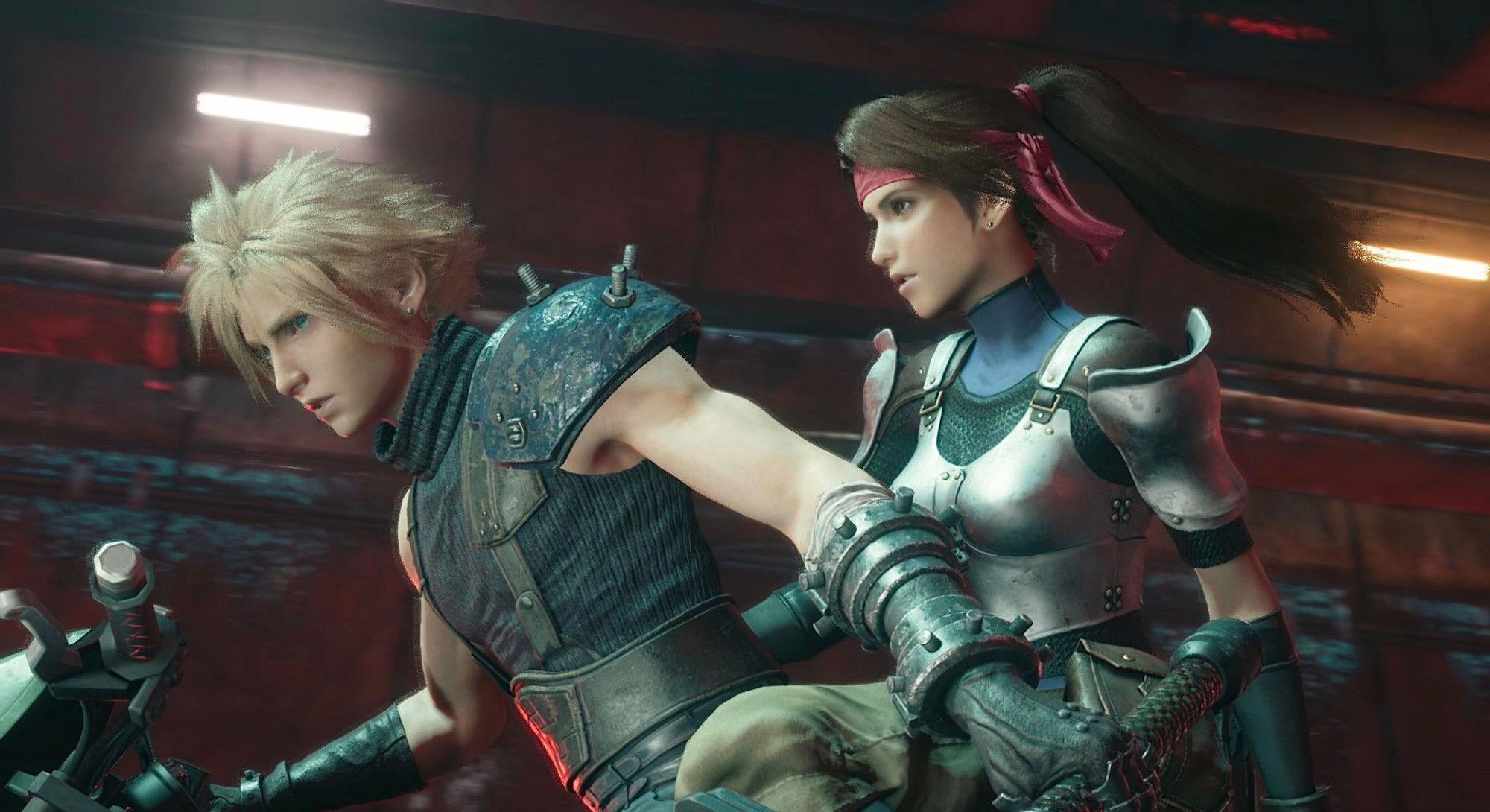 I found myself intimidated by the romantic options in Final Fantasy VII.

The year was 1999, I was 11 years old, and it felt like I was being forced to choose between Aerith (a flower girl who’s the last of a magical species) and Tifa (my childhood friend who learned enough martial arts in five years to kick my ass). These confident women vying for my affection were downright frightening. Remember: I was 11.

So, playing as Cloud Strife (I renamed him “Corey” Strife), I took a liking to someone else entirely: Jessie Rasberry.

Maybe it’s because there’s something special about the easygoing rapport between Cloud and Jessie. She’s earnest and friendly, unburdened by the level of importance that Aerith and Tifa have as two-thirds of gaming’s most prominent love triangle. In FF7, Jessie seems like a good person just trying to do the right thing. For a game where a talking fox/lion has a tail that’s constantly on fire, her personality is strikingly realistic.

She also happens to think you (Cloud Strife) are cute. I really liked that.

To see Jessie become a confident main character in Final Fantasy VII Remake — which sold 3.5 million copies in the three days after its April 10 release — feels sublime for anybody who played the original 1997 game and wanted more from this side-character who (spoiler!) dies early in the game.

“It was truly like a dream, like I had written a fan fiction that I wanted to be Jessie’s story,” Lindbeck tells Inverse. “That’s what it wound up being.”

Because FF7 Remake remixes a game that’s more than two decades old, everyone gets “a really intense glow-up,” Lindbeck says, and none is more pronounced than Jessie's.

When Lindbeck signed on for the part, she expected like most of us that Jessie would have another minor role.

Instead, Jessie is a central character in the first half of the game, providing many of the game's best laughs and swoon-worthy moments. Plenty of fans on Reddit and other places have crowned Jessie the game’s scene-stealing breakout character.

While Jessie’s funny and lighthearted, it’s her confidence that makes her admirable.

“Jessie acts as a really interesting foil to Tifa and Aerith. She’s very unlike both of them,” Lindbeck says. “She goes after what she wants unabashedly and lays all her cards out on the table. There’s no guessing with her.”

In Jessie's first conversation with Cloud, she presses him on his relationship status with Tifa. By the end of Chapter 4 (about a day later in-game), she invites Cloud over for what sounds a lot like home-cooked pizza followed by a hookup. This never happens, but still. The thirst increases exponentially in these early chapters.

“I was so shocked with how forward she is with Cloud,” Lindbeck says. “I remember saying, ‘Does she really say this!? Are you serious!?” They were like, ‘Go for it, girl.’ So I did.”

At 27, Lindbeck was only 5 years old when Final Fantasy VII was released for the original PlayStation. She learned about it from YouTube a decade later. Lindbeck's first exposure to FF7 happened when she was 15 and watched Final Fantasy VII: Advent Children, the 2005 animated film set two years after the original game.

“I was so into anime and manga and games that it tracks for me that I would have just stumbled upon it randomly one day,” she says.

Lindbeck recalls being confused about why characters like Zack and Aerith were in the Lifestream rather than with the rest of her group. Advent Children relies on viewers having knowledge of what happens in the original. That confusion and intrigue provided the foundation for a year-long obsession:

“I did a deep dive and watched all the Crisis Core cutscenes and was absolutely wrecked,” Lindbeck says of the prequel game starring Zack. “I couldn't believe that something like that even existed.”

Anyone who's beaten FF7 Remake knows that the story delivers something far more than a hi-res reboot of the original, telling an exciting new story that makes us wonder how different Part 2 and beyond might look. Is it possible that, like Biggs, Jessie survived in FF7 Remake? Who is Cloud's best match in FF7 Remake? What was it like voicing Jessie knowing that she's fated to die?

For answers to questions like this and more about Lindbeck's performance, keep reading.

Below is an abbreviated Q&A with Lindbeck. Spoilers ahead.

Inverse: When portraying Jessie, how much did you think about her tragic fate?

There’s a misconception that we as actors need to know our character’s entire arc. Obviously, I knew that Jessie dies in the original game, and she does die in this one as well, but her final scene doesn’t have any bearing on any of her prior scenes.

As an actor, you don’t want to play her ending. I’m not going to play her doom-and-gloom, so I received a lot of more general directions that gave each scene a sense of immediacy that goes hand-in-hand with good acting.

Jessie’s never gloomy, and even on her deathbed, she’s still cracking jokes — which is what makes it even more tragic.

FF7 Remake expands her backstory to focus on revenge after her father is poisoned. How did that shape your portrayal?

That’s such strong motivation. Going to Jessie’s house in the game really adds some depth to her. I’m super grateful they put it in. I was shocked that it went that dark. It resonated with me as an actor, playing someone who is technically a failed actor. I don’t think that she fails in life because she took up a really good cause. I found her death very tragic. She dies thinking, “This is all my fault. I deserve this.”

For an actor playing something like that, it’s gold. They really dug that knife in! I’m just bleeding out here playing the scene. I thought it was beautiful.

It’s one thing to get a part in a game. It’s another thing to keep that part, for the game to come out, for people to love that character, and then for a game to do well. There are all of these things that have to happen to create a situation like FF7 Remake, which has just been incredible.

Have you read any of the fan fiction about Jessie?

Listen, I’ve read my fair share of fan fiction, but I actually didn’t read any Jessie fan fiction. I didn’t know that there were people who shipped Jessie and Cloud in the original. I do know that there was a small but passionate faction of people who really love Jessie. I have a friend who mentioned offhand years ago that Jessie was her favorite character, and she didn’t even know I was voicing her at that point, which is hilarious.

There’s also a contingent of people who thought Jessie was a guy!

“Inside, they’re actually sweet and caring.”

I’m a Cloud fangirl because Jessie is a Cloud fangirl. It was important for me to be in the thirsty mindset to do the character justice, so I found many things I love about him, like how endearingly awkward he can be. At the end of the day, he’s a very soft boy, and I think that’s really cute. That’s a Final Fantasy thing: Hard exteriors and Buster Swords, but inside, they’re actually sweet and caring.

I really like Cloud and Jessie’s dynamic. She ribs him because she knows she can. At the end of the day, he and Jessie are friends and he’s there for her. He’s just not great at expressing it.

I have friends where I’m the Jessie to their Cloud, not at that thirst level, but in the sense that they’re on the shy side so I’m constantly ribbing them to get them out of their shell. That’s what Jessie is really doing. She has only positive motives when it comes to Cloud. He can really use a friend like her even if she might want something more.

Who do you ship for Cloud?

I have to say Jessie, but I’m not sure that’s going to go anywhere.

I ship Tifa and Aerith! If anything, I feel like Tifa, Aerith, and Cloud should just be in a group relationship together. There’s no way I can really pick.

A popular theory is that Jessie survived at the end of the game. Would you ever return to voice this character again in Part 2 or another project?

Oh my gosh, of course. My friends keep texting me asking me what’s going to happen. But [Square Enix] doesn’t tell us anything, which is good for security purposes. I’m also the last to know things, so I have no idea. But, of course, I would reprise this role in a heartbeat.

I’ve been on this project for five years total, and if this is it, then that’s also fine by me. They really did Jessie’s death justice and did an incredible job with her character. I was able to do so much more than I would have imagined on this project.

I’ve come to terms with the fact — or not the fact, rather the idea — that if this is all it is, then that’s okay. Jessie’s death was really impactful. Either way, I feel so lucky to have been a part of something like this.

Keep reading about FF7 Remake below: