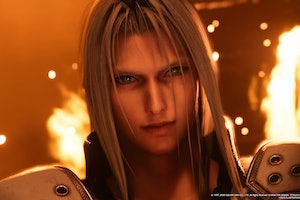 clues about those new trademarks

All aboard the speculation train! While there hasn’t been much news about the next installment of Final Fantasy VII Remake since it launched, the floodgates have suddenly burst open. Square Enix quietly trademarked a handful of phrases that are sending fans into detective mode.

The new trademarks include “Ever Crisis” and “The First Soldier,” both loaded phrases for fans of the series. Despite that, the trademarks are entirely vague Do these signal that a sequel announcement is imminent? Are some spinoff books or animations in the works? Or does this have nothing to do with gaming at all?

We broke down four plausible scenarios for what the new trademarks might mean. Just be warned: we’re heading into some Final Fantasy VII Remake spoilers to do so. Let's mosey.

There’s plenty of reason to think either of these could signal a sequel. The ending of Final Fantasy VII Remake makes it clear that PSP spinoff Crisis Core plays a huge part in what’s to come. The “Crisis” in Ever Crisis could be a reference to that game, which makes sense considering Zack’s mysterious role in the new story.

The First Soldier, on the other hand, seems to be a clear reference to Sephiroth. That might mean that a sequel could be more focused on the villain, which lines up with the original game.

If these do happen to be sequel titles, that raises even more questions since there are two separate trademarks. It’s possible that Square Enix could be locking down the next two games in the series way in advance. There’s also a possibility that only one is the proper sequel title, while the other is being saved for something else (more on that next). Either way, the phrases are so specific that it seems like they’re tied to the Remake and its sequel in some way.

There’s a possibility that Ever Crisis doesn’t have anything to do with Remake’ sequel. Instead, the title could refer to full-fledged Crisis Core remake. The PSP game is a little niche compared to the more universally known Final Fantasy VII, but Zack Fair's dramatic reappearance in the final moments of Remake suggest the character will continue to play a significant role in the series’ future. In all likelihood, Square Enix could be plotting a remake to get players up to speed before the next proper FF7 chapter.

That would also give Square Enix a way to tell a more focused story about Zack without having to swap perspectives too much in the sequel. Right now, the prevailing theory is that both Cloud and Zack will be playable in the next game, but this could be a way to keep the sequel squarely focused on Cloud. In that case, The First Soldier could be the next installment’s title.

When it comes to Square Enix, you can never count out spinoffs. This is the same company that releases bizarre Kingdom Hearts side games with mind-boggling titles. While this scenario might not be as exciting, there’s a perfectly good chance that Ever Crisis and The First Soldier are totally separate games.

That could be a mixed bag. You could either end up with an entirely original action spinoff starring Sephiroth or a rhythm game akin to Kingdom Hearts: Melody of Memory. There's already a precedent for the latter considering that Theatrhythm: Final Fantasy exists. Even more plausible, you always have to be prepared for the possibility of a mobile game.

At this stage, it feels like Final Fantasy VII is becoming its own franchise within the wider Final Fantasy universe. If that’s the case, it would make sense for Square Enix to build the game’s mythology out further with additional content. Considering that no mainline Final Fantasy game has a subtitle (save for some remakes and relaunches), it would be breaking convention to use a title like Final Fantasy VII: Ever Crisis here, so that adds a little heat to this theory.

1. Books, movies, and other FF7 media

The more probable answer here is that the trademarks might not relate to gaming at all. It’s easy to imagine titles like this popping up on some sort of novelization of the game or in a movie like Final Fantasy VII: Advent Children. There’s a lot of new lore to get through when it comes to the Remake’s totally changed world and other media could be used to fill in some gaps.

The First Soldier especially feels like a novelization along the lines of Final Fantasy XV - The Dawn of the Future exist. It’s pretty easy to imagine a whole novel centered around teen Sephiroth becoming a soldier. Of course, we’d much rather play as teen Sephiroth, so fingers crossed that one of the other three scenarios comes true instead.

More like this
Gaming
Feb. 1, 2023
The Best Video Game Ever Made Just Got Its Own Holiday
By Hayes Madsen
Gaming
Jan. 31, 2023
The Last of Us Theory Reveals a Heartbreaking Secret the Game Only Hints At
By Willa Rowe
Gaming
Jan. 31, 2023
Fire Emblem Needs To Steal a Winning Strategy From the Yakuza Games
By Hayes Madsen
LEARN SOMETHING NEW EVERY DAY.
Related Tags
Share: