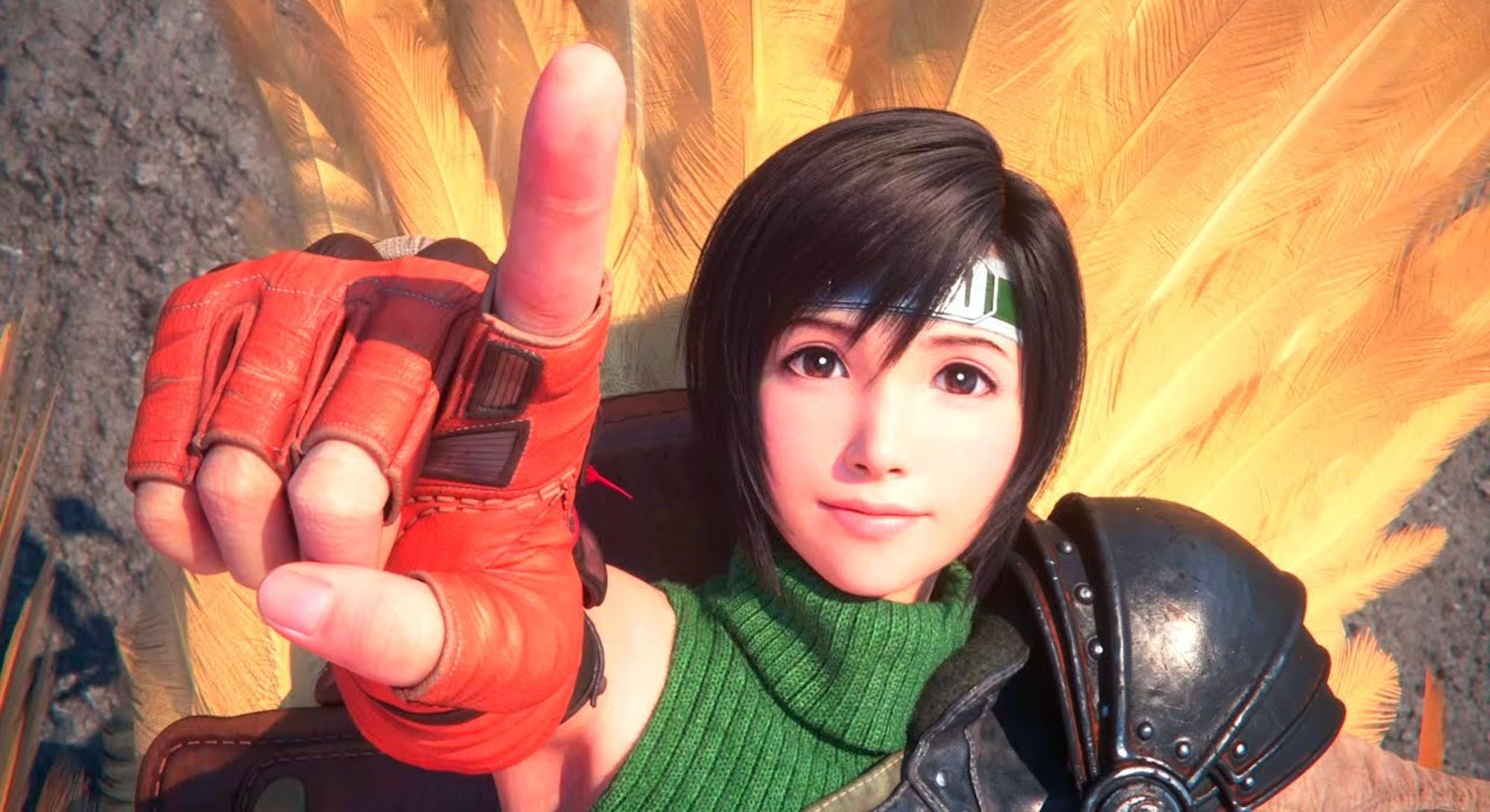 My name's Nadia, and I love Chocobo racing.

If a physical representation of Final Fantasy VII's Gold Saucer most famous minigame was somehow presented to me, I'd gladly smoke it. When I read Jen Glennon's teardown of Chocobo racing in her article "Final Fantasy VII Remake Part 2 Shouldn't Have Chocobo Racing," I banged both hands on my desk, screamed "WARK!,” and immediately began pecking out a rebuttal.

Raising and racing FF7’s Chocobos is awesome, actually. Grinding repetition is fun. Breeding sibling Chocobos is good and natural. Searing the Chocobo race music onto your brain is a fine idea.

All right. I give up. FF7's Chocobo breeding/racing minigame actually kind of sucks. A ghastly amount of work goes into hatching and rearing Chocobo bloodlines, and the mechanics driving the birds' genetics are absolute nonsense. Your hours of lost time may indeed yield the coveted Golden Chocobo, but the bird can only lead you to a prize that's ultimately not worth the effort.

I still raised Chocobos like mad, though. I bred enough of the little bastards to open my own fried chicken franchise. And I agree with Jen on one point: Chocobo racing in FF7 is a mess. That said, the core concept is solid — and the minigame is far more important to FF7's story and atmosphere than you may initially realize. If Chocobo racing is cut away from FF7 Remake Part 2, so goes a chunk of the game's atmosphere.

How to Train Your Chocobo (to Curbstomp Sephiroth)

I have a tendency to not finish games I love because I don't want them to be over. It's dumb as hell, of course; I don't close a book on the last chapter because I'm not ready to say goodbye to its characters. But RPGs make it easy to put off final encounters, sometimes indefinitely. FF7 in particular gives you several incentives to pull back from that crater and hang out with The Gang for hours on end, and Chocobo racing turned out to be my incentive.

I like animals, and I like minigames that let you care for animals in some manner. I also like wasting my time grinding for ultra-rare rewards. If your Chocobos make the right kind of love to each other, they'll eventually, eventually produce a legendary Gold Chocobo that's capable of running across every manner of terrain on the map — including the ocean.

A gold bird can take you to places in FF7 that are inaccessible even to the Highwind (your airship). Most notably, a Golden Chocobo can carry you to a tiny tree-covered island that contains the mightiest Summon Materia in the game: The Knights of the Round. When used in battle, the titular Knights of the Round spend about 10 unskippable minutes curb-stomping your foes while the traumatized brown-haired kid from The Simpsons wails "Stop! Stop! He's already dead!"

I never cared much about the Materia. Knights of the Round is a white elephant. The long, long cinematic that accompanies the Summon can't be skipped: Late-'90s Squaresoft put a lot of time and money into those scenes, and by God, you are going to watch every second, every time. Yes, the Summon deals a blow to Sephiroth, but everyone's favorite fallen angel allegory has his own unskippable cinematic attack that takes a season to execute. That said, it's not much fun to watch the heroes and the final boss sling 15 FPS cutscenes at each other, so I generally avoid using it.

But breeding Chocobos is a reward unto itself because it's a cocktail of additives.

For starters, it's a repetitive grind: Only S-rank Chocobos have a chance of producing top-tier offspring, and building up to S-rank means you must race, race, race.

On top of that, breeding multicolored Chocobos in the first place requires capturing wild birds that hide in very specific areas. Once you snare and stable your potential parents, you have to attain a very specific specimen of [clears throat] "Chocobo nut" to encourage them to get it on and make the right kind of baby. The process can take days if Our Lady of Primo RNG refuses to smile upon you — and it can take weeks or months of trial-and-error if you don't consult a guide and learn exactly which nut you need to feed your Chocobo before it'll nut.

The luck-laced grind of FF7's Chocobo breeding and racing might be a lot of fun for bozos like myself, but normal human beings understandably won't draw any fun out of trying to understand its badly-translated jumble of vague instructions.

But let's not throw the baby bird out with the birdbath water. There's still a case to be made for putting Chocobo racing in FF7 Remake Part 2. Here’s why.

Race For Your Life, Cloud Strife

The act of breeding Chocobos is redundant and insipid, but FF7 Remake Part 2 will be diminished if Chocobo racing somehow isn't woven into its plot. The mere presence of Chocobo racing makes a hefty contribution to FF7's dystopian atmosphere. Cloud first becomes a jockey so he can impress the warden of Corel Prison and win his freedom. The association lends the sport a grimy, underground allure that drives home how deeply Shinra's corruption penetrates every aspect of life on the planet.

To the average tourist, however, Shinra's Gold Saucer is a thrilling theme park full of big noises and shiny things. Cloud and his pals know they're treading on Shinra's playground, but even they can't resist its charms. When your tram sails over the Chocobo racetrack in FF7's emotional "Interrupted by Fireworks" sequence, there's no trace of Chocobo racing's dirty link to Corel Prison. Everything is soft, colorful, and lovely. The duality is delicious.

The Gold Saucer is a cauldron of confused feelings. It's a "happy" place where team members vent concerns, betray friends, and even come to terms with budding romances, all by the garish lights of the racetracks. It's one of the most important places Cloud's team visits in FF7. If the next installment of the remake gets rid of Chocobo racing, it'll destroy the heart of the Gold Saucer. I can't speak for anyone else, but I don't want a neutered Gold Saucer experience. Worse would be a FF7 Remake Part 2 that lacks a Gold Saucer experience, period. The very prospect makes me shudder. I'd find a way to make Square Enix stand in the shame corner.

Truth be told, I'm not really losing any sleep over the prospect of Square Enix canceling Chocobo racing.

I'm confident it'll be there because Chocobo racing is alive and well in Final Fantasy XIV. I've raised several proud generations of birds in FF14, and thankfully the process of breeding a champion is far less convoluted than wrestling with FF7's roulettes. There's still a lot of racing involved, but FF14's racetracks are much more refined than FF7's clusters of floating polygons. You can pick up buffs and debuffs, Mario Kart-style, and inflict other racers' Chocobos with sluggish speed and other status effects.

The genes you bequeath upon your birds determine their innate strengths, and their ability to resist other Chocobos' attacks. Mercifully, FF14 doesn't let you breed your Chocobo with siblings or parents. Cover fees and pedigrees are involved, not unlike actual horse racing. Again, if you're the avoidant type, let me assure you Chocobo breeding and racing can distract you for hours. Sephiroth can't end the world while you're seated on Chocoback, wrapped in thorns, and hurling yourself into the bird keeping pace at your shoulder.

FF14 proves Chocobo racing can work in modern Final Fantasy games. It almost feels silly to leave it out of FF7 Remake Part 2. Even if Square Enix can't find a way to let us ride Big Bird down a racetrack, it needs to make sure the culture of Chocobo racing is embedded in the game somehow. A Final Fantasy 7 Remake without a Chocobo racetrack would be like a fried chicken feast without gravy.