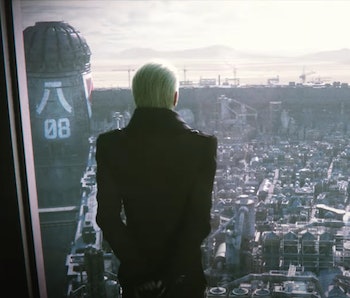 Against all odds, Final Fantasy is getting a battle royale game, and it’s set within the ever-growing universe of Final Fantasy VII.

Announced in February 2021 on the same day as Sony’s State of Play presentation, Final Fantasy VII: The First Soldier is an upcoming battle royale title for mobile devices. It lets players create their own SOLDIER just like series protagonist Cloud Strife and fight it out against other elite, superpowered operatives wielding magic and all manner of weaponry. The title had actually been leaked via a Square Enix trademark in January 2021, but we all assumed it probably had something to do with the villainous Sephiroth, who is literally the first SOLDIER within the game’s lore.

As far as surprises go, this one’s pretty big for the Final Fantasy franchise. FF7 series Creative Director Tetsuya Nomura hopes that the game can attract battle royale fans to the growing FF7 sub-franchise: "I do want people to discover an interest in the world of FF7 from this game,” he said in a Famitsu interview, “but it goes without saying that if we are going to do it properly then there can be no half measures, and we are putting everything we have into getting the content of the game right too."

Here’s everything we know about FF7: The First Soldier.

When is the FF7: The First Soldier release date?

The initial February 2021 reveal announcement for The First Soldier notes that the game is “slated for release in 2021.” A financial report from the game’s developer Ateam confirms that the plan is for a simultaneous worldwide release. Beyond that, we don’t know for sure, but late 2021 seems most likely.

In a February 2021 interview with Famitsu, Creative Director Tetsuya Nomura spoke about how The First Soldier, Intergrade, and Ever Crisis are meant to keep fans entertained while they wait for the next installment of Final Fantasy VII Remake. said he “would be delighted to see fans lose themselves in these three games set in the FF7 world in the meantime.”

Intergrade — the PlayStation 5 extended upgrade for FF7 Remake — will be released on June 10, 2021. So it stands to reason that Square Enix will want to space these three titles out. Whether or not that’s accurate, we’ll likely learn more during another Square Enix Presents sometime this summer.

Is there a FF7: The First Soldier trailer?

Yes! Square Enix released a trailer for The First Soldier in February 2021, the same day the company announced Intergrade and Ever Crisis.

The trailer sets up the backstory: 30 years before the events of FF7, Shinra begins a top-secret project to bioengineer supersoldiers, aptly named SOLDIER. “To supplement their military prowess, Shinra forms SOLDIER — an experimental corps of enhanced fighters,” captions in the trailer read. “Join the fray, lay waste to your foes, and climb the ranks.”

The First Soldier mixes first- and third-person action where players wield two weapons, three magic spells, and what looks like a movement-based ability. There are also vehicles like motorcycles and Chocobos in the mix, along with familiar-looking enemies like Bombs and various Shinra robots — so not only will some of these maps be large, but players aren’t the only enemies you have to worry about.

We see one SOLDIER cast a spell that creates a barrier (likely Protect or Shell) to block an incoming fireball. Gunplay looks surprisingly robust and crisp. When players aim down the sights, they get a first-person zoom that seems pretty effective at a variety of ranges. Melee-based combat, whether with a sword, fists, or staff, looks remarkably similar to the FF7 Remake battle system. We even see the summon Ifrit appear at one point, so this seems like a pretty robust combat system for a battle royale.

What is the FF7: The First Soldier story?

As detailed in the trailer, The First Soldier takes place in Midgar several decades before the events presented in the original FF7, presumably before Shinra finished construction on the vast plates covering huge sections of the city. A March 2021 Famitsu report confirms that the game will depict much younger versions of certain main characters. That same report confirms that the Ever Crisis mobile game, which covers the narrative from every previous FF7-related game, will also include original chapters focusing on the backstory of The First Soldier.

“The First Soldier takes place around 30 years before the FF7 main story,” Nomura said, “and goes into the founding of SOLDIER, so it goes without saying that you will see some of the legendary heroes in their younger days, as well as younger versions of the future Shinra executives and other characters who will appear in the FF7 Remake sequels. I think that it will really add depth to some of the characters who we do not have room to show fully in the main games.”

Many of the younger cast — like Cloud, Tifa, Aerith, and even villains like Rufus Shinra and Sephiroth — were not born yet in this era. However, it’s likely that The First Soldier will include older characters like President Shinra, Vincent Valentine, Professor Hojo, and more.

The First Soldier is an action-oriented third-person shooter that also incorporates melee weapons like swords. So it does resemble Fortnite in some fashion, but incorporating several different types of magical spells will likely make it feel a bit closer to Spellbreak.

A March 2021 Famitsu interview confirms The First Soldier will have some sort of job/class-based system, as evidenced by icons attached to players that look like a blue fist, red sword, or yellow staff.

“Each player on a team can select a job-like play style called a ‘style’ for a match and these icons represent the styles chosen,” Nomura said based on a translation from RPGSite. “Each style has its own unique skills and abilities, and you can change the one you set for each battle. There are advantages to continuously using the same style, but we will reveal exactly what exactly those are at a later date.”

Like many battle royale games out there, The First Soldier will be free-to-play, but it will include microtransactions of some kind.

Is there a FF7: The First Soldier beta?

There will be some kind of closed beta before the game launches worldwide later this year, but it’s unclear when it will take place. Watch this space as Square Enix makes more information available.

Will FF7: The First Soldier get a console release?

Currently, The First Soldier is slated for release on iOS and Android devices only, but developers are at least considering console ports. "I have no plans to distribute it on a dedicated machine, but I would like to discuss it with Square Enix," a representative of developer Ateam said, as reported by Gamebiz.

FF7: The First Soldier will launch worldwide on iOS and Android devices sometime in 2021.