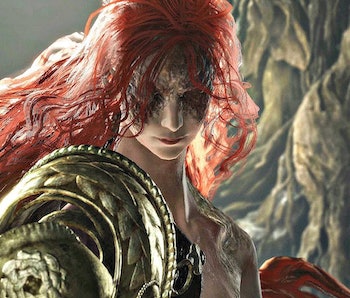 Arguably the hardest boss fight in all of Elden Ring is Malenia, Blade of Miquella. You’ll recognize this optional foe from some of the game’s earliest trailers. The encounter is found in the Elphael, Brace of the Haligtree area towards the end of the game. There are many reasons Malenia is a tough opponent, such as her ability to take you out in a single combo, even if you have a ridiculous amount of health. She also makes use of a unique healing mechanic that will almost certainly push you to your limits. And you cannot cheese this boss (at least, that we know of), so you’ll need to learn to fight her head-on. Here’s a breakdown of the Malenia fight, with details on how to prepare for it, along with her moveset.

How to prepare for the Malenia, Blade of Miquella boss fight

It’s certainly possible to defeat Malenia with a low-level character and weak weapons, but you’ll have a much easier time if you prepare. For this fight, we advise coming to it when you’re at least character level 100, with around 45 Vigor (the higher, the better) since Malenia has multiple one-hit-kill attacks. It’s recommended to bring as many healing flasks with you as possible to help you survive.

It’s also highly recommended to come with the Mimic Tear Ashes Spirit to help distract the boss. This Spirit is found in the Night's Sacred Ground area Nokron, Eternal City. This Spirit is ideal since it mirrors many of your attacks.

In terms of viable weapons, we suggest using something with blood loss buildup, such as the Keen Nagakiba or the Bloodhound’s Fang. It might seem obvious, but having high damage output with powerful scaling will work wonders during this fight.

When it comes to armor, it’s best to use gear with high physical defense, even if it slows you down a tad. This boss can take you down in one hit, so having high defense will serve you well. We also recommend skipping a shield, which will preserve your equipment load and stamina consumption.

To round out the build, it’s important to bring the Hoarfrost Stomp Ash of War, which is found just west of The Ravine Site of Grace. Destroy the invisible scarab to obtain it. Finally, try to apply Freezing Grease to your weapon for extra damage.

Malenia, Blade of Miquella Phase One

This handy video has lots of tips to help you take Malenia down.

Like most Elden Ring bosses, Malenia has two phases. Unfortunately, phase two resets her health back to full, making it much harder to take her down. To make matters worse, Malenia heals herself each time she deals damage to you or a Spirit, so you’ll need to stay on your toes for the entirety of the fight.

Malenia has numerous attacks, many of which are subtle variations on one another, so it’s tricky to go through her entire moveset. Instead, we’ll highlight the key attacks that she performs consistently, and how to avoid them.

During phase one, she’ll thrust forward with her sword, covering a lot of ground before dealing damage. For this move, roll straight into her, and then get a couple of hits in before backing away. She has a similar move that involves her lunging forward and slashing, so use the same method to avoid it, but instead, dodge into her twice.

Malenia’s leaping combo is her deadliest, as she can wipe out your entire health bar if you get caught within it. She telegraphs this move by jumping into the air and twirling around before slashing everything in front of her. There are three sets of combos she uses as part of this move, and with precise timing, you can actually roll into her after the second set of slashes. After that, back away, let the camera reset, and you’ll be able to dish out a few attacks. It’s safer to simply avoid all of these combos altogether, so if you see her jump into the air, run.

Throughout this phase, we highly recommend standing behind Malenia, while your Spirit deals damage to her front. Your goal is to stun-lock her by timing your attacks just after your mimic’s. Use Hoarfrost Stomp or any other two-handed slash to deal damage, and with a little luck, the boss will be unable to move, at least temporarily.

It’s not practical to use this method to completely avoid taking damage altogether, but it’s an effective strategy that will aid you throughout the battle. Mix this method with rolling through her attacks, followed by a few quick strikes of your own to whittle her health down. Once you deplete her health bar, she’ll enter phase two.

Somehow, phase two is even more difficult. Malenia will sprout wings and begin flying around the arena, adding a handful of additional attacks to her already powerful arsenal. As soon as the phase starts, she’ll fly up into the air before slamming down with a powerful flower explosion that deals area of effect (AoE) damage. Coming into contact with the flowers will also deal rot damage, so make sure you stay just on the edge after she lands.

After she crashes down, wait for her flowers to disappear, and you’ll be able to rush in and get several strikes in as she recovers. While her AoE attack is deadly, it’s easy to avoid and it leaves her open for attacks afterward, so always be on the lookout for it. In fact, if you want to play it safe, you can pretty much only attack after she performs this AoE maneuver since it’s so easy to avoid.

Another new move you’ll want to be aware of is her clone attack, which involves Malenia sending minions at you. You’ll know it’s coming when she jumps into the air and has flower petals floating around her. She’ll then send multiple minions at you, so run to the side while rolling through each of their strikes.

The main thing to note about this section is that some of her moves from the first phase are harder to telegraph due to her wings. They lightly obstruct some of her animations, making it tricky to predict what’s coming your way. With that in mind, it’s a good idea to always play it safe and stay away if you’re unsure what she’s about to do.

If you play it safe and keep stun-locking her when the opportunity presents itself, you’ll be able to take her down, especially if you make use of your mimic.