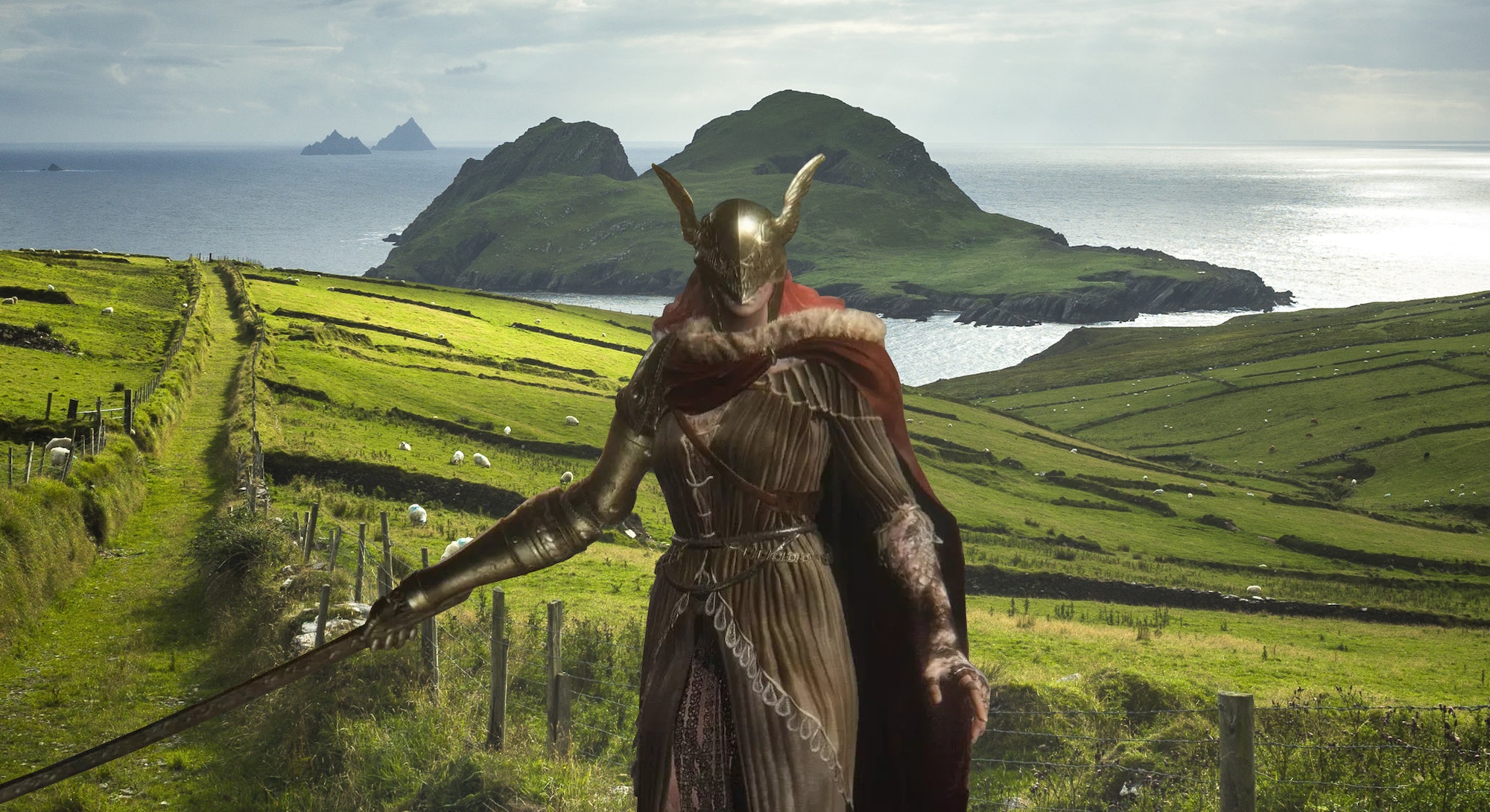 You’ll find it deep in the lurid haze of Mistwood.

Just past the towering runebear who spends all of its time claw-punching trees for shits and giggles, there lies a small circular structure. At its center sits an unassuming lift.

Like most of these setpieces in Elden Ring, the ordinary only exists as a gateway to the extraordinary. The ensuing elevator sequence is drawn out to the point of absurdity. You'd be forgiven for likening it to a journey through all seven circles of Hell, except in this instance, the Devil's ruling is death by a thousand bores. But eventually — after a hundred, maybe a thousand years — you reach the bottom of the shaft and everything starts to make sense. Sort of.

The sprawling, picturesque area we’re about to discuss may no longer be a secret, but the pronunciation of its name sure seems to be. This intensely memorable passage to a new subterranean world is the Siofra River Well. It’s pronounced "shee-fra." Not “see-oh-fra.” Not “show-fra.” Not “sioff-er,” or however some of the more ambitious chancers are saying it.

This is one of many Irish references in Elden Ring, and FromSoftware games across the board. While some people from other countries likely thought "Siofra" was just a made-up word, it's a popular name for girls in Ireland and traditionally means "fairy" or "elf." It's no longer a case of the word possibly being etymologically Irish. The spelling is there; the context is there; the Irish influences elsewhere in the game are there. It's irrefutably linked.

Why does this matter? Well, Irish characters in video games are usually pretty lackluster. Alcoholism, excessive use of the word "feck," and fanciful accents don't make a character Irish. (Don't even get me started on The Saboteur's Sean Devlin, Fallout 4's Cait, or Red Dead Redemption 1’s Irish.)

There are rare exceptions, like Red Dead Redemption 2's Sean MacGuire and Moira from Overwatch — even if she sounds more akin to a news anchor than someone you might bump into down the pub. But other than that, the most worthwhile Irish representation in triple-A video games is largely attributable to FromSoft. This is why it's so worth drawing attention to how much Cool Shit™ in Elden Ring directly pertains to Irish history and mythology.

What’s in a name?

Anyone with even vague knowledge of Irish names will instantly recognize Commander Niall as being from the Emerald Isle. What's more intriguing than that, though, is how this fact subtly informs a completely different part of the lore.

If you've ever met someone from Ireland, it is statistically pretty likely that their surname was O'Something — O'Connor, O'Rourke, O'Brien. While Commander Niall is a major boss in the Mountaintops of the Giants, there's a minor boss in Caelid's Swamp of Aeonia called Commander O'Neil. When you look into the etymology of these names, you'll soon learn that "Neil" (pronounced "kneel") is an anglicized spelling of the Irish name "Niall" (pronounced "Nile").

Here's where things get interesting. The purpose of the "O'Something name is to denote a certain familial relationship — it literally means “descendant of.” The same is the case for “Mc” surnames, in which the prefix is quite literally "mac," the Irish word for "son."

So we can deduce that Commander O'Neil is in fact Commander Niall's son simply by applying these rules from the Irish language. Once you get this far, you'll start to see other similarities, too. It's not just a case of two bosses using a similar gimmick, summon, or armor set — it's a case of them being bound by mostly invisible blood.

There are only 5 million people in Ireland, and only about 30-40 percent of that demographic would have strong enough Irish to notice this connection. Of that figure, how many are even playing Elden Ring? It’s very cool to see FromSoft integrate something into the lore that only a small number of players would naturally pick up on.

Elden Ring doesn’t just coincidentally overlap with these elements of Irish culture by accident 500 times a minute — it openly embraces its Irish influences in a way very few triple-A games have done before.

Even characters with names from other etymological origins, like Malenia, are distinctly Irish-coded. Her flowing red locks and prosthetic arm clearly reference Nuada Airgetlám, a legendary Irish hero. Airgetlám means “silver hand,” and refers to the fact Nuada lost his arm in battle and had it replaced with an artificial one by Dian Cecht. This was a necessary measure, given that only someone who was physically whole could lead the illustrious Tuatha dé Danann.

Elden Ring’s family feud among the demigods also bears a striking resemblance to the Tuatha dé. This ancient race of Irish demigods were born to Danu, an apocryphal goddess with striking similarities to Queen Marika. The Tuatha dé Danann's mortal enemies, known as the Fomorians, were monstrous supernatural beings associated with death, chaos and darkness. (The Formorians are often considered a less agreeable version of Norse mythology’s jotnar.)

If you've been playing a lot of Elden Ring, you'll probably have noticed the Evergaols scattered across the world. "Gaol" is a term of French, English, and Irish origin that literally just means "jail," but the premise of bosses being magically imprisoned in these places — likely by the demigods — adds a very interesting layer of legitimacy to this theory: the demigods’ brutish adversaries, imprisoned forever until a lowly Tarnished sets them free just to beat them up all over again.

Malenia's second-phase transformation could be interpreted an extremely cool riff on legendary Irish hero Cú Chulainn's infamous riastrad, meaning "warm spasm." After he went into this state during battle, he needed to be forced into an ice-cold bath, from which the water would immediately evaporate. After the third tub's worth of water went up in steam, he would sleep with every man's wife and then go out fighting again the following day. (Yes, really.)I’m not alone here. Shortly after the first Elden Ring reveal, Irish gaming Twitter thought multiple characters depicted in the trailer had big Cú Chulainn vibes.

With all of the evidence above — for Elden Ring alone, no less — I'm not sure this is an argument that can be easily refuted.

These links go far beyond FromSoftware’s latest — the entire Souls series is and has been intricately intertwined with Irish and Celtic mythology and characters all along.

In Dark Souls 2, the Emerald Herald is impeccably voiced by Irish actress Ruth Negga. It also features Laddersmith Gilligan, arguably the most emphatically Irish character to grace a video game… maybe ever? His best lines are probably "Shush, you eejit!" and "I'm from a wee bit out Wesht," both of which still make me pinch myself every time I hear them. Fair play to Connor Byrne, king of Souls VAs.

Speaking of which, the same actor also voices Bloodborne's Father Gascoigne, and delivers yet another Irish slang banger with "Beasts all over the shop." Either Miyazaki and co. sit at home watching Father Ted on Saturday nights, or FromSoft's localization team is based in the heart of Dublin.

Both are equally plausible, despite the fact that neither is even remotely true.

The point is that you just don't get this kind of thing anywhere else. It's strange to think the developer who has been most consistent with delivering nuanced and respectful depictions of Irish culture is based outside of the Anglosphere, while developers in countries much closer to Ireland — which often even have Irish staff — continue to falter.

FromSoft has been doing right by Ireland for over a decade now. I can’t wait to see what it has in store for us next.