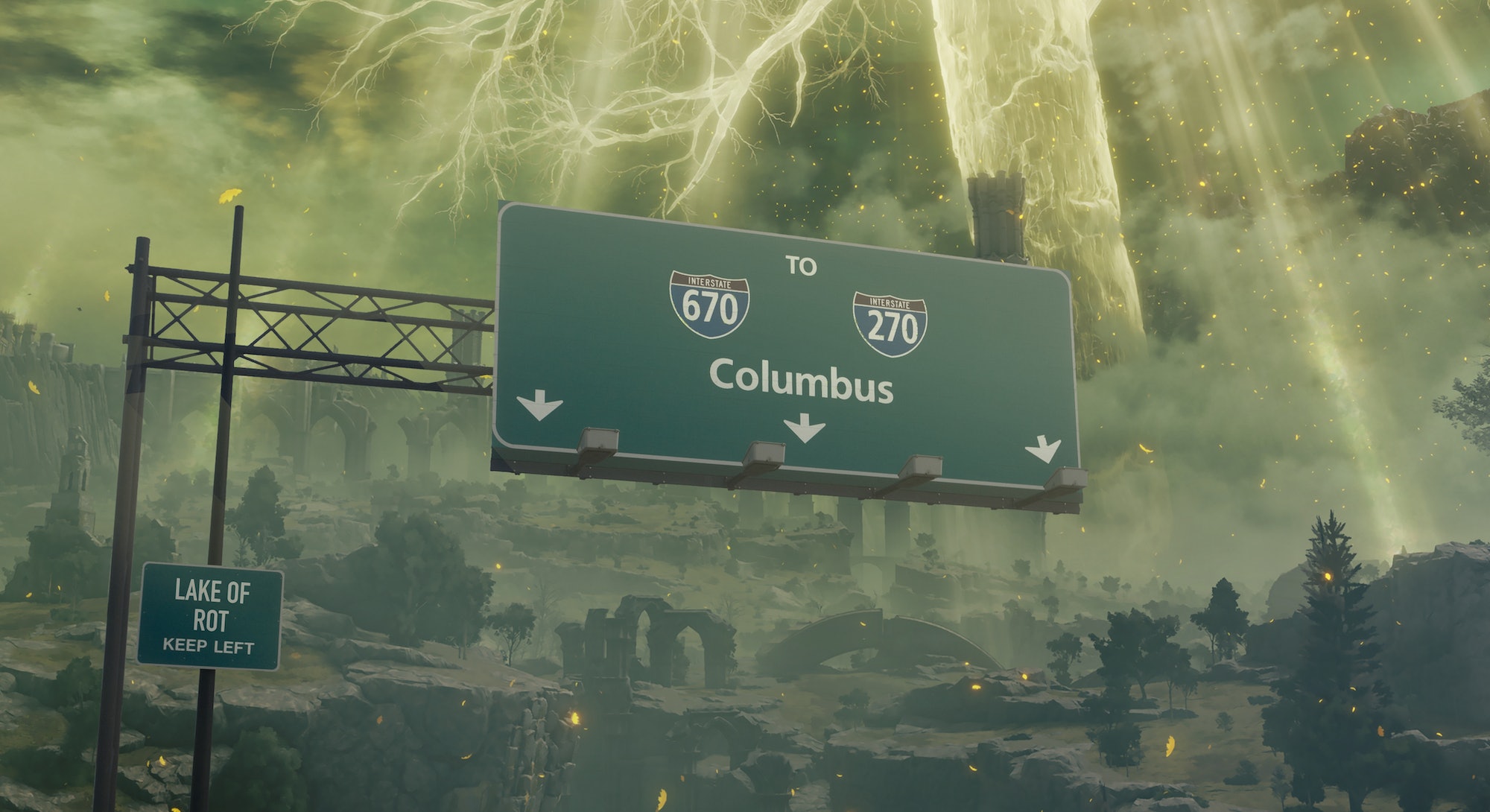 Despite what one popular Elden Ring meme may suggest, the Cleveland skyline does not stand out against ominous red skies, Lake Eerie is not filled with blood, and Cincinnati is not overrun with giant, monstrous bears.

But for one brief, glorious moment online, asking Google where the Lovecraftian new video game takes place brought up a surprising answer: Ohio.

While this may seem like little more than an internet glitch or a clever dunk on the Midwestern state, the history behind the Google goof is rooted in a longstanding regional rivalry more passionate than the feud between Elden Ring’s Malenia the Severed and Starscourge Radahn.

Where does Elden Ring take place?

On March 5, an anonymous Wikipedia user changed the Elden Ring page to say that the game takes place in Cleveland instead of the nightmarish “Lands Between.” Though the update was quickly undone, it didn’t stop Google from indexing the detail whenever someone searched, “Where does Elden Ring take place.”

“Wait what the hell,” one user wrote in a tweet that quickly went viral. “Ohio” showed up as the answer in the featured snippet.

“We identified this @ronnui_tweet as the major viral post that took off after the Wikipedia edit,” Don Caldwell, Editor in Chief of the internet history repository Know Your Meme, tells Inverse.

But it didn’t stop there. Ohioans and other jokers soon joined in with their own observations about the state’s similarity to the Lands Between, sharing photoshopped images of armored soldiers standing under a red sky with “Cleveland” and “Cincinnati” typed across the images.

As one Redditor explains, “People like to joke that Ohio is one of the worst states, so the joke is that Ohio is so bad it's like living in the Elden Ring world.”

Inverse consulted several former and current Ohioans for a more accurate account of just how much the Lands Between of Elden Ring actually resembles their fair state. And, as it turns out, the comparisons may be more legitimate than you’d expect.

Dean Cooper, who lived in Cleveland for two years, likens the suburb of South Euclid to the bleak landscapes of Caelid in Elden Ring, which is plagued by the fictional malady known as Scarlet Rot. Chemicals from steel production drove wealthier inhabitants out of South Euclid years ago, but those who couldn’t afford to move suffered as a result of the pollution.

“Add in decades of political corruption, redlining, subprime lending on mortgages, and you have a huge swathe of the city stuck in a dying land,” he says.

Inverse contributor George Yang, who lived in Ohio from 6th grade until after college, likens the suburban plains to those in the Lands Between. He says Elden Ring’s messages system resonates with the infamous “Hell is Real” signpost between Columbus and Cincinnati, too. He also notes that Touchdown Jesus, a statue north of Cincinnati that was fried by a lightning bolt back in 2010, bears an unlikely resemblance to the Radagon statue in Elden Ring.

Ash Parrish, a video game reporter with The Verge, has a more positive take on the state where she’s lived for more than a decade, mostly around Cleveland and now in Akron.

“The Lands Between is like Ohio because initially hearing the name inspires revulsion,” she says. “But after spending some time here, it's actually quite pleasant, such that you never want to leave.”

In her eyes, the state is one of the few places where it’s still possible to live the “American dream” with an average income. According to the 2015-2019 Census Bureau, the median income of an Akron resident is about $38,000. (It’s unclear how many Runes that translates to.)

The origins of a meme

It’s not really possible to know the identity of the first Elden Ring-Ohio joker. However, we can deduce some information about its origins from Wikipedia edit history and a public IP search.

Searching for “Ohio” in Wikiblame, a site that allows users to investigate the editing history of Wikipedia pages, opens up a list of revisions that includes insertions and deletions. All the way at the bottom is the first instance of an edit citing “Cleveland, Ohio.” This was later deleted, but changed again to just “Ohio.”

“The original editor was from Pittsburgh.”

It appears the original change took place early on March 5, but the follow-up edit happened (cited on Know Your Meme) later that same day. The original editor’s IP also appears in the edit history, which you can then plug into an IP address searcher.

From there, it becomes clear: The original editor was from Pittsburgh. This hints at the meme’s ties to a decades-long rivalry between the two cities.

A tale of two cities

The rivalry started all the way back in 1950, when the Cleveland Browns joined the NFL and started competing in the same regional division as the Pittsburgh Steelers. Over the last 72 years, it’s become the oldest and most storied rivalry in the AFC, partly due to the proximity and similarities between the two cities. In Pittsburgh, one can easily find shirts, mugs, and other memorabilia trashing Ohio and especially Cleveland. (Ohio knows how to throw its punches too, as evidenced by the popular “Pittsburgh Sucks” hot sauce.)

Inverse writer Bryan Lawver has lived in both cities and notes that Cleveland has a more one-sided rivalry with Pittsburgh. Redditors hailing from both cities have referenced this, too. (Though clearly someone in Pittsburgh cared enough to edit Wikipedia.)

“I would say that young people in Pittsburgh have very little opinion of Cleveland, and old people hate Cleveland because of Jim Brown and the rest of those Browns teams,” one Redditor writes. They also mentioned that Pittsburghers also make fun of Cleveland for “being bad at football.”

According to official records, the Cleveland Browns have struggled to keep a win percentage above 0.500 since the 1970s, while the Pittsburgh Steelers have a more positive record. (With 138 games played between them, it’s also the oldest rivalry in the American Football Conference.)

Cleveland resident John Learned compares his city’s sports teams to the non-player characters in Elden Ring, a “cavalcade of lies, sad stories, and wasted potential, not unlike decades of professional Cleveland sports.”

He adds, “As perennial losers, it's hard to justify a rivalry with anyone.”

Elden Ring is available for PC, PlayStation 4, PlayStation 5, Xbox One, and Xbox Series X|S. See for yourself how the Lands Between compares to suburban Ohio.