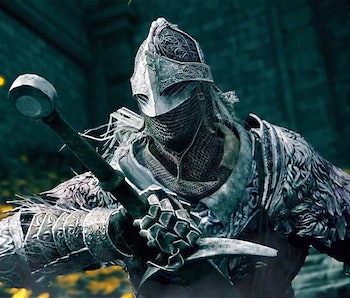 Elden Ring takes a lot of inspiration from Dark Souls, which features a character class system. The latest FromSoftware title has ten classes players can pick from when creating their character, with many sharing similarities with those found in Dark Souls. While choosing one class over another doesn’t lock you out of content, it does determine your starting stats and equipment, which can heavily influence the upgrade path you’ll take. With that in mind, here are the ten starting classes in Elden Ring with comparisons to the traditional Dark Souls counterparts where applicable.

Like with Dark Souls before it, Elden Ring’s classes loosely follow your typical high fantasy archetypes, but there are some noteworthy and gritty exceptions.

Vagabond is likely one of the easiest starting classes in Elden Ring, most comparable to the Knight from Dark Souls. This class comes equipped with a sword and shield and has high Vigor, Strength, and Dexterity. The Vagabond will be a good choice for anyone that wants to approach Elden Ring in a more methodical, defensive way.

The Warrior is the Dexterity-focused class of Elden Ring, focusing more on dodging and positioning than defense. The class comes equipped with two scimitars and a light shield and has medium physical stats on top of the high dexterity. That makes it a dead ringer for the Mercenary class from Dark Souls III. Keep in mind that dual-wielding means you can’t block and parry, so the Warrior needs to heavily focus on offense if you choose it.

Hero is an ax-wielding class most similar to the Bandit from Dark Souls — not to be confused with the Bandit from Elden Ring. This class comes with very high Strength and Vigor as well as moderate Arcane, which is a stat that can affect your likelihood of finding items. Because of the high Strength stat, the Hero will want to focus mostly on offense, although it still has a formidable defense.

Despite its name, Bandit shares more in common with the Thief class from Dark Souls, as it's focused on ranged and sneak attacks. They start with a dagger, parrying shield, and bow and arrows. In terms of stats, the Bandit focuses on having high Arcane and Dexterity, effectively letting it sneak through areas and find items more easily than other classes.

The Astrologer is the main offensive magic-user of Elden Ring, having the highest starting Mind and Intelligence. Of course, this means the Astrologer is also the weakest class physically and in terms of defense. The class comes with a staff, sword, small shield, and a selection of offensive magic. The Astrologer will likely be one of the more complex starting classes in Elden Ring, and you’ll want to keep in mind the range it needs during combat. But if you’re a pro at Sorcerer in Dark Souls, then you’ll feel right at home here.

The Prophet has the highest Faith of any starting class and focuses on offensive attacks bolstered by its holy incantations. Starting equipment is a spear, finger seal (magic casting item), and small shield. While the Prophet initially has a low health pool and terrible armor, its real strength lies in using incantations to bolster its offensive and defensive capabilities. That sounds pretty similar to Cleric in Dark Souls, even when it comes to the bowl haircut. If you want to play the Prophet you’ll need to manage your FP well, ensuring that you’ll be able to use magic at all times.

Samurai is one of the stranger, and more complex, starting classes in Elden Ring. It’s heavily offensive-focused with high Dexterity and medium Strength, Endurance, Mind, and Vigor. While the other classes can grow stronger in the long run, Samurai seems to be one of the stronger classes right out of the gate. One of the biggest strengths of the class is its equal ability at both close range and long-range, as it comes equipped with a katana, longbow, round shield, and both Bone Arrows and Flame Arrows. This one’s similar to Assassin or Mercenary with some obvious Samurai design choices.

The Prisoner is easily the strangest-looking class in Elden Ring, and it’s effectively a Spellsword, blending swordplay and magic — even though its look is totally reminiscent of the Deprived from Dark Souls. Of course, this means the class has fairly high Dexterity and Intelligence, and it starts with an estoc (or a large sword), staff, and shield. The Prisoner starts with two spells, Heal and Beast Claw, which lets the user send a short shockwave along the ground.

Confessor is the easiest class to make a jack-of-all-trades, as it has decent physical abilities and different incantations to use. Its starting stats have high Fath and medium Strength and Vigor, and equipment includes a broadsword, kite shield, and finger seal (magic using item). Confessor is a good starting choice and you essentially have two options on development, focus on high faith and incantations or the aforementioned jack-of-all-trades. Therefore, this one seems to riff on the Wanderer Dark Souls class with some Cleric flavor.

Functionally, the Wretch is the equivalent of the Deprived in Dark Souls, as it starts at level one and has no real bonuses or strengths. It’s a class mostly intended for those that want to add an additional challenge to the game. But it also allows for the most freedom in progression. All Wretches start with only a club for equipment. Just make sure you know what you’re getting into if you choose this class.