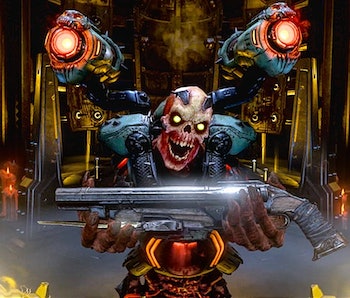 As Doomguy returns to Earth to rip apart countless hordes of demons in Doom Eternal, he'll collect a familiar assortment of guns that anyone who played Doom (2016) will probably recognize, with a few notable exceptions. Like in the Slayer's last bloody adventure, each of those weapons has unlockable mods and other upgrades. With a limited number of Mod Bots out there, you're probably wondering which weapons are worth your time and resources. Wonder no more; we're breaking it down here.

What weapons do you get in Doom Eternal?

At the beginning of Doom Eternal, the Doom Slayer begins his adventure with his trusty Combat Shotgun and gradually unlocks the Heavy Cannon, Plasma Rifle, Rocket Launcher, Super Shotgun, Ballista, Chaingun, and the iconic BFG-9000 naturally as part of the game's story. You'll also be introduced to Mod Bots fairly early on. These unlock special attachments that transform your weapon with the press of L2 (on PS4) in battle, enabling unique attacks.

The very first mod you unlock is Sticky Bombs for the Combat Shotgun, which fires grenades that stick to surfaces and enemies. This is particularly useful on enemies like the Arachnotron, a giant brain-spider thing with a turret for a tail, and the Cacodemon, a gross flying mouth with one eye that spits at you. Alternatively, there's a Full Auto mod for the Combat Shotgun that effectively decimates armored enemies like the Pinky.

Everything pertaining to guns can be found in the Arsenal tab of the in-game menu.

What are the 7 best weapon mods to prioritize in Doom Eternal?

Mod Bots are scattered throughout the world, but you can also find two of them in Doomguy's hub base, the Fortress of Doom. There are a total of 13 purchasable mods across your various weapons. While it's possible to unlock them all, some are far more useful than others.

Here's a quick rundown of the most important mods in the game, which could vary depending on your playstyle.

What are the best weapon upgrades to purchase first in Doom Eternal?

Weapon Upgrades in Doom Eternal are tethered to mods and purchased with Weapon Points gained by defeating demons. Some regular fights will get you Weapon Points, as will most boss fights, all secret encounters, and each of the six Slayer Room challenges. They're plentiful and don't seem to be capped like most currencies, but you should still prioritize the best upgrades available.

Upgrades vary wildly from weapon to weapon and mod to mod, but in most cases, it'll be something like a reduction to reload speed or an increase in transform speed. As a general rule of thumb, go for the Upgrades that come with the mods mentioned above. Here's a targeted list of Upgrades to get ASAP, along with the mod and weapon they're attached to:

What are the best weapons to master first in Doom Eternal?

Unlocking all the available upgrades for a weapon's mod opens up a Mastery Challenge that grants you a remarkably useful perk. Each challenge involves using a weapon's mod effectively, usually against a specific enemy, a certain number of times. There are also a scant few Mastery Tokens that allow you to bypass the mini-quest and master the weapon right away. You'll get a lot of use out of the Upgrades above, but some of the Mastery perks are too good to pass up, even if the weapon overall won't get a lot of use.

More like this
Gaming
Feb. 3, 2023
How the Hi-Fi Rush Ending Sets Up a Potential Sequel
By Hayes Madsen
Gaming
Jan. 27, 2023
4 best weapons to upgrade first in the Dead Space remake
By Joseph Yaden
Gaming
Jan. 24, 2023
How to use the weapon triangle and 5 more combat tactics in Fire Emblem Engage
By Robin Bea
LEARN SOMETHING NEW EVERY DAY.
Related Tags
Share: