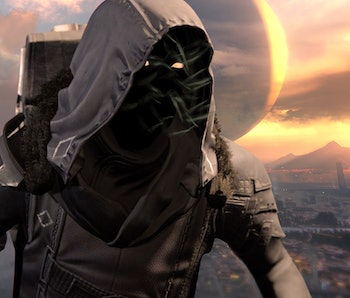 Since the launch of Destiny in 2014, Guardians have had three constants in their lives: regular new content, grinding for new gear, and the possibility of obtaining excellent new gear through a merchant called Xur who wanders into the game's solar system every weekend.

Where is Xur on Friday, February 21, 2020? And what curios is the creepy merchant peddling this time? Keep reading to find out.

Xur is a strange merchant with a Lovecraftian squid-face who wears a dark robe and appears in a different location within the Destiny 2-verse every Friday around 12 p.m. Eastern.

He brings with him a brand-new inventory of random exotic items available for purchase with Legendary Shards, and he departs upon the weekly reset the following Tuesday at 12 p.m. Eastern.

Because they're totally random, the items he sells are often a mixed bag; They can either be incredible boons for advanced players, or they might be absolute drags. Hunters might have excellent treasure waiting for them the same week that a frustrated Titan tries to attack the merchant for selling that same terrible pair of gloves. But for completionists and collectors who want every piece of exotic armor and every exotic weapon, a visit to Xur is a necessary weekly ritual. Finding him has never been particularly easy.

It used to be simpler in the first Destiny when Xur would only appear in social spaces. He must’ve gotten one heck of a permit between the two games because in Destiny 2 he can set up shop on any explorable planet in Patrol mode. Don't worry: He still shows up in the Tower occasionally. But for anyone looking to find him, here's your primer on what Xur's up to this week.

Where is Xur on February 21 in Destiny 2?

This week, Xur can be found in the EDZ at Winding Cover.

If you have trouble finding him, reference the above map with the cursor pinned to his location.

What is in Xur's inventory the weekend of February 21?

Before heading over to the Agent of the Nine’s curio shop, you might want to know if what he’s got in stock is worth your time. This is what Xur is selling from February 21, 2020 until reset:

Insectoid Robot Grenades -- This weapon's grenades are insectoid robots that chase targets and explode close to them.

Serve the Colony -- Insectoid robot grenades quickly repopulate the magazine from reserves while the Colony is unequipped.

Should you Obtain, or is it Lame? Obtain! The gun is useful in very specific PVP cases like the Momentum Control game mode.

Should you Obtain, or is it Lame? Obtain. The arc abilities are a boon for any Hunter’s arsenal.

Mask of the Quiet

Should you Obtain, or is it Lame?: Lame. It can be useful during PVP but quickly becomes obsolete once you get a wider exotic selection.

Crown of the Tempests

Conduction Tines--Arc ability kills increase the recharge rate of your Arc abilities and extend the duration of Stormtrance.

Should you Obtain, or is it Lame?: Obtain! If you’re using Arc Webbed Grenades, this speeds up the recharge rate immensely! This is a must-buy for Stormcallers!

Xur also has some other things worth checking out if you're interested:

Destiny 2 is free to play on PS4, Xbox One and PC.