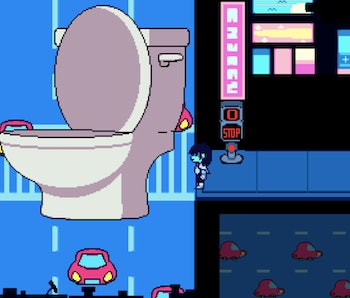 It’s been a long time coming, but the day’s finally here. Back on Halloween 2018, Toby Fox released Deltarune Chapter 1, the first installment of his successor to the wildly popular indie RPG Undertale. Players can venture back to the Dark World with Kris, Susie, Ralsei, and Lancer when Deltarune Chapter 2 launches on PC and Mac on September 17. Here are all the essential details you’ll need to be among the first to experience this new adventure.

If you’re outside the continental United States, you can figure out when Deltarune Chapter 2 will release in your region here.

How do I transfer a Deltarune Chapter 1 save file?

You’ll need to play on a Mac or PC that has existing completion data. Completion data is generated when you see the credits of Chapter 1. That means you have to go to sleep in your bed at the end of the game.

If you played Deltarune Chapter 1 on another device, like your Switch or PS4, you won’t be able to transfer save data. However, Fox says this shouldn’t affect your enjoyment of the story too much. In an FAQ post about Chapter 2, he notes:

“You can play Chapter 2 without save data from Chapter 1. As long as you generally remember what happened story-wise, you'll be fine.”

Throughout Deltarune Chapter 1, the in-game dialogue repeatedly reminds you that your choices don’t matter. That’s a big departure from Undertale, where seemingly trivial actions like buying a donut at a bake sale can have an impact far later on in the game. While there may be some small changes for those playing with existing save data, it seems Deltarune won’t have wildly divergent story routes like its predecessor.

Is Deltarune Chapter 2 on PS4, Xbox, or Switch?

Chapter 1 also came to Mac and PC first, and became available on consoles three months after the initial launch. That means we can expect to see Deltarune Chapter 2 on PS4 and Switch sometime around December 2021 or January 2022.

More like this
Gaming
Jan. 18, 2023
A Space for the Unbound is 2023's first great indie game
By George Yang
Gaming
Jan. 17, 2023
Everything we know about Animal Well
By Hayes Madsen
Gaming
Jan. 28, 2023
The most daring Yakuza game is also the franchise’s best
By Willa Rowe
LEARN SOMETHING NEW EVERY DAY.
Related Tags
Share: