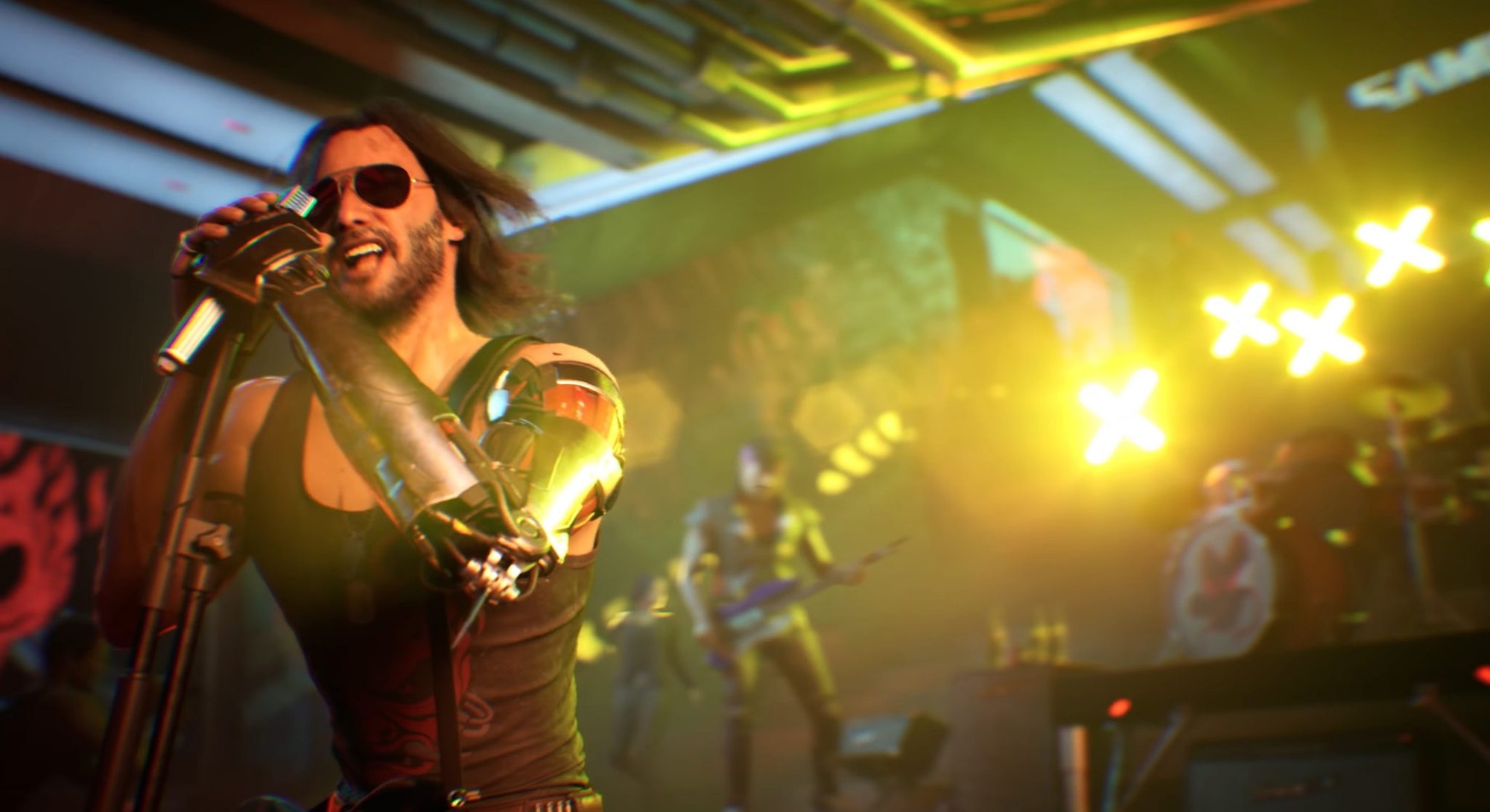 The stylistic leap from high fantasy to futuristic sci-fi was a daunting one for the composers at CD Projekt Red.

“Working on The Witcher 3 was a walk in the park compared to Cyberpunk 2077,” CD Projekt Red Music Director and Composer Marcin Przybylowicz tells Inverse.

Whereas The Witcher 3’s music evokes a sense of the brutal Middle Ages with bard-like tunes and a sweeping orchestral score, the music of Cyberpunk 2077 has to vibe with theoretical tech from half a century in the future while accommodating CD Projekt Red’s branching narrative style.

“What kind of options does a specific quest offer to the players?” Przybylowicz says. “We need to react to that with our music. It’s up to the players to determine how the music will come together eventually.”

Some of the game’s most satisfying Easter eggs will involve the way the music evolves in certain side quests. As the game’s story changes during a quest based on your choices, so does the music. Murder someone in cold blood and the music might turn sinister. Do something brave, and maybe you’ll hear a tune to match it.

One particular mission previewed in June sees the protagonist V tasked with stealing a robot from the tech-obsessed Maelstrom gang. Przybylowicz estimates there are five to seven different outcomes, determined by some 18 decision points. Whether you choose to fight the gang members who put guns to your head is up to you, but the music will bend and flex to reflect the vibe of whatever’s going on. There’s seemingly so much variation in this regard that no two playthroughs will ever be the same.

“The game is a living, breathing, organism — as I like to call it — with all its interactivity and adaptiveness,” Przybylowicz explains. “The music will feed into the engine to work together closely with the game’s branching storylines and non-linear narratives.”

Video games always use an audio engine running behind the scenes to cue music depending on player input — if they enter a shop or suddenly start a firefight, the music has to reflect that experience — but CD Projekt Red’s intermingling of branching narrative and dynamic audio presents a wholly unique set of challenges.

Three key composers made all the music on Cyberpunk 2077, working with a common set of instruments and devices to craft separate tracks while also incorporating numerous songs from big-name acts like

Przybylowicz and fellow CD Projekt Red composer P.T. Adamczyk are based in Poland at the company’s headquarters, but the Scotland-born Paul Leonard-Morgan operates out of Los Angeles. Przybylowicz says he focused on music related to the various gangs that populate Night City, along with Braindances, a dreamlike way to experience someone’s memories using what we might as well call highly advanced VR.

Adamczyk was in charge of the Johnny Silverhand questline (that’s the in-game musician played by Keanu Reeves). He also created music for the Nomads and Badlands, the Mad Max-style vagrants and the apocalyptic wastelands they roam outside the city. Adamczyk also focused on something called the “transgression theme,” a big-brain term CDPR’s devs use to describe the moments of contact between technology and humanity.

Leonard-Morgan says these boundaries were fluid during the months-long composition process, which saw him mainly working on tracks focusing on Night City.

“My synth, from 1982, is an ugly piece of machine made out of cheap plastic with knobs that look like they’re from a nuclear reactor.”

Despite being half a world away from each other, all three composers used similar instruments — mostly a “mishmash of synthesizers,” Leonard-Morgan says — and grappled with the same musical stylings to come up with a unified sound.

“We spent ages developing the sounds of this game that no one else in the world has ever done!” Leonard-Morgan says. “That experimentation process over six to eight months allowed us to come up with this unique sound.”

Leonard-Morgan used western and ‘80s analog synths, whereas Przybylowicz and Adamczyk have Swiss-made Polivoks. It allows them to create a sound that’s at once retro and futuristic.

“My synth, from 1982, is an ugly piece of machine made out of cheap plastic with knobs that look like they’re from a nuclear reactor,” Przybylowicz says. “But it has the appeal of a Kalashnikov gun. It may be older than your parents or the oldest car you’ve ever seen, but it has a character and sound like nothing else in the world.”

They all also have a synth called the Folktek Mescaline, an unconventional machine that’s essentially a circuit board with “no standard input methods.” There are no keyboards or pads. Instead, its wielder plugs in cables to make sounds by touching various pads. The sound will depend on the order you plug cables in and how much electricity runs through it.

“The results are quite spectacular,” Przybylowicz says, “because it can deliver the sweetest, most romantic sounds ever, or just smack you in the face with brutality.”

While much of the score incorporates distorted electronica, the most obscure sound the team used actually came from Adamczyk’s brother, who recorded the distinct sound of a door closing at a gas station in Belarus.

We’ll probably hear that only at a single gas station somewhere in Night City. Plenty of players will probably never hear it at all.

“The sheer scale of how much bloody music that’s been done for this…” Leonard-Morgan says.

Putting the punk in cyberpunk

“We are not making a cyberpunk game,” Przybylowicz says when I ask him how the game might fulfill or subvert players’ expectations about the genre. “We are making Cyberpunk 2077 all based on the pen-and-paper RPG.”

Przybylowicz quotes “one crucial sentence” from an early chapter of the Cyberpunk 2020 rulebook (the tabletop RPG that the video game is based on). It’s a provocative vibe that pervades everything in Cyberpunk 2077: “Style over substance.”

“You’re all alone against the violence of the city and you may die, but when you die, at least do it in style,” he says. “Be flamboyant. Make your mark.”

It brings to mind a moment from that aforementioned Maelstrom quest. Depending on how you handle being held at gunpoint, you can wind up getting shot in the face. It speaks to the kind of outrageous brutality of this world, but also Cyberpunk 2077’s transhumanist themes at play. Even if you die, it’s incredibly hard to truly kill a cyborg like V.

This kind of escalation also means Night City is always fraught with danger.

“I always think of punk as an attitude about who you want to be as a person,” Leonard-Morgan says of the ideas that shaped his vision of the city’s ambiance.

All three composers are aware of gamers’ expectations that Cyberpunk 2077 will hew to the ‘80s synthwave feel of stories like Blade Runner and Ghost in the Shell. But Przybylowicz says that the “analog neon melancholic aesthetic” alone simply would not do the trick here.

“There are punk and synthwave, but what’s the point of coming up with a sound that’s been done before?” Leonard-Morgan says.

Instead, the team says they gravitated toward the “punch and energy” of the ‘90s while creating the soundscapes of Cyberpunk 2077.

“Their whole roster from the ‘90s still sounds futuristic even though it’s more than 20 years old,” Adamczyk says. “Berlin is 500 miles west of here. It’s hard not to be influenced by the electronic scene of Germany.”

He also cites the techno-based music of Ukraine and Russia as an influence on the game’s musical stylings. This will, in theory, make the music sound even more alien to western audiences in America.

“The sound we’ve got going for the score is very electronic with weird synths and other sounds with sprinkles of electric cello and real drums to give it a sense of humanity,” Paul Leonard-Morgan says. “It’s a very unique sound. I don’t think this has been done in a game before.”

Przybylowicz echoes the sentiment, promising that Cyberpunk 2077 will deliver a chaotic and varied sound unlike anything that gamers expect.

“I think we prove once again that cyberpunk as a musical genre can shine with lots of ambiguity,” he promises. “When it needs to be, it’s violent and brutal and smacks you in your teeth, but when it needs to come down and show the human soul and pure emotions, that’s there as well.”

Based on all accounts, it sounds like we’ll get plenty of teeth-smacking and pure emotion when Cyberpunk 2077 is finally released in December.