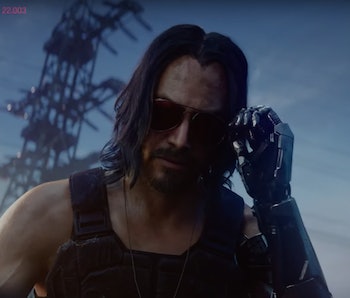 On Friday, CD Projekt Red showed off new gameplay footage of Cyberpunk 2077 at the start of PAX West 2019 in Seattle, detailing the game’s stealth and brute-force styles, along with its environments and characters.

The presentation also revealed that the character Johnny Silverhands — played by Keanu Reeves — can turn out to be your friend or enemy, depending on the decisions you make during the game. But the real question remains: can your character have adult sexytimes with Keanu? Hear us out.

The video game developer’s incredibly popular The Witcher 3 offered up plenty of opportunities for the main character Geralt of Rivia to get down with a bevy of beautiful babes — sometimes more than one at a time. Seriously, there are full-blown, detailed guides out there designed purely to help Geralt score with Triss, Yennefer and all the various strumpets, harlots, and courtesans traipsing about The Continent. And while these interludes never became X-rated, there were definitely some hard-R moments, the sort of thing you really, wouldn’t want to be caught watching at work.

To be perfectly clear, there was literally nothing in Friday’s Cyberpunk 2077 presentation at PAX to indicate that your character will, in fact, be able to board the express train to Pleasure Town with Reeves’ Johnny Silverhands. Instead, the stream’s narrator revealed, “Like everyone in Cyberpunk 2077, he has his own agenda. You’ll decide if he’ll be your ally, or your enemy. And that chip in your head, thanks to which Johnny lives inside your mind? Well, that’s a story for another time.”

If he’s literally implanted in your mind, why wouldn’t he get a few ideas after a thrilling mission to the robot strip club, or whatever sordid things you’ll get up to in Night City’s seamy underworld of Pacifica? Maybe you’ll even be able to hack him with your little hand-tentacle thing shown in today’s footage.

All the cybernetic enhancements made possible by the game’s transhuman setting makes the options for virtual deviancy positively endless. That said, it is extremely unlikely an actor of Reeves’ stature would permit his likeness to be used in the sort of ugly-bumping hijinks seen in Witcher 3. But maybe, just maybe, it may not be too much to hope for a bit of flirting followed by a tasteful fade to black.

The complete lack of substantive evidence suggesting players will be able to hit the sheets with Johnny Silverhands didn’t stop some imaginative Cyberpunk 2077 watchers from making their desires known.

Despite cautioning viewers about spoilers, CDPR didn’t reveal a whole lot we didn’t know already about Cyberpunk 2077 at PAX. We learned a bit more detail about the Strong Solo and Netrunner playstyles, namely that they are basically aggro and stealth, nothing particularly new for seasoned players of shooters or action-adventure games, although there’s lots of ways to customize your characters skills and traits as you play.

There were some cringey moments in the presentation, mostly the game’s questionable depictions of all-Black Haitian gang known as The Voodoo Boys and a rival gang called “The Animals,” lead by a masculine woman named Sasquatch, but we’ve known about those guys since E3. It’s an odd aspect of the game to showcase right now, given that CDPR has already drawn plenty of blowback for its cloddish handling of sensitive cultural issues.

Whether it’s about seducing Keanu, or the game’s stunning visuals, Cyberpunk 2077 will likely be one of the most-talked games at PAX West this year. We can also expect to see fresh info about other major upcoming titles, like Final Fantasy VII Remake and Pokemon Sword and Shield coming out of Seattle this weekend.