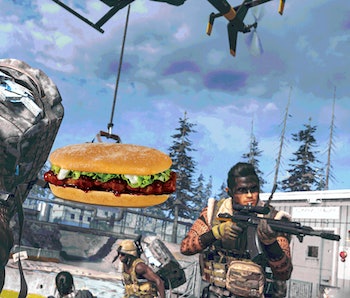 Call of Duty: Warzone Season 4 introduced a 200-player battle royale mode to the first-person shooter on June 29. The update notably increased the scale of the game’s free-for-all showdowns, which were originally capped at 150 players per lobby. CoD developer Infinity Ward announced Wednesday that the much-hyped new mode had been removed only 10 days after it was added.

Did 200-player Warzone battle royale just become the gaming equivalent of a McRib?

As announced by Infinity Ward on Wednesday, 200-player mode has been removed from Warzone’s playlist. The developer has thrown fan-favorite team-modes BR Quads and BR Stimulus Trios back into the fray, but after all the hype that went into announcing 200-player rounds, you’d think the game mode would stick around for at least the extent of Season 4 — or at least two weeks.

It seems like Infinity Ward and Activision have taken a page out of the McDonald's marketing playbook and artificially created scarcity and demand for it 200-player mode just like McDonald's has done with the McRib.

Every year, the Golden Arches brings back its so-called “barbecue” sandwich for a very limited time. During that period the company will run ads that read “Get it while it lasts!” and “For a limited time only!” even though customers know that it’ll be back eventually. The McRib consistently boosts McDonald’s sales every year because this sneaky marketing tactic essentially fakes scarcity for the sandwich. This phenomenon has even been given its own moniker: The McRib Effect.

There are glaring similarities between the McRib’s yearly marketing push and the brief stint of Warzone’s 200-player mode. Infinity Ward and Activision hyped how Warzone would be the largest-scale battle-royale on the market from the very beginning, only to remove it the week after it was announced.

The only real difference is that most Warzone players don’t seem sad about the 200-player lobbies being removed, while the McRib has cult following and superfans have even created webapps to find the nearest restaurant that’s offering one. Rest assured: BR 200 will be back. Having it in the game for such a limited amount of time feels like a McRib-style stunt.

Infinity Ward cycling its game modes isn’t anything groundbreaking in the games industry and has been used by other companies to spice up competitive games from time to time. Every game from Fortnite to Overwatch has done it, so it makes sense.

The Inverse Analysis — Blizzard’s team-based shooter Overwatch has an Arcade playlist that is frequently updated with various other game modes that offer a change of pace from the game’s objective-based rounds.

Traditionally, first-person shooters have always had a Deathmatch or Team Deathmatch game mode players could hop into if they just want to click heads with no real teamwork involved. But Overwatch didn’t have this iconic mode until it added to it Arcade, and it remains one of the most popular modes in the game today.

Blizzard is seems to be keenly aware of that and takes it out from time to time so fans will continuously check back to see the mini-game has returned, just like the McRib heads patiently waiting for the return of the favorite sandwich.

So when will McDonald's and Activision partner up to make the McRib the official sandwich of 200-player battle royale in Warzone?