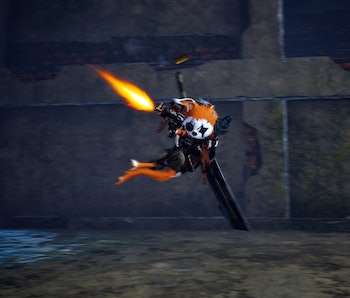 Experiment 101 and THQ Nordic first announced this ambitious and distinctive open-world game in 2017. After several delays, it’s finally on the cusp of launching. If you like weird games that take place in new worlds, then you’ll enjoy what Biomutant has to offer.

It isn’t like much else as you control an animal that knows kung-fu and has psychic powers in a story entirely told through one narrator. If you’re intrigued by this new game, this is everything that you need to know about Biomutant’s launch.

When is the Biomutant release time?

As a single-player adventure with no odds or ends to worry about, Biomutant has a straightforward release time. Biomutant will be released at 10 a.m. Eastern on May 25, 2021 on consoles according to an official FAQ. PC players will have to wait until 1 p.m. Eastern.

Currently, Biomutant is officially only being released for PC, PS4, and Xbox One. There are native Xbox Series X and PlayStation 5 versions of the game in the works, but don’t look for those next-gen versions on your respective storefront. Of course, you’ll be able to play the last-gen versions on next-gen consoles thanks to backward compatibility.

Is there a Biomutant preload window?

For anyone who pre-orders Biomutant on a console, they’ll be able to preload the game ahead of release. Once you pre-purchase the game on the Xbox or PlayStation storefront, you should be given the option to download it right away. For whatever reason, there are no preloads for PC storefronts, so folks will just have to wait until launch time to download it on PC.

What is the Biomutant file size?

Currently, Biomutnat only has a file size of 13.6 GB on Xbox One for Inverse. Even if this ends up increasing slightly due to a day one patch, this game is still significantly smaller than many of its peers. When an open-world game like Ghost of Tsushima can take up significantly more storage space, it’s refreshing to see Biomutant execute a game of similar scope but do it with a much smaller file size.

Because the file size is so small, it should download fairly quickly, so even if you don’t pre-order and preload the game, you won’t have to wait very long after initiating the download.

Is Biomutant on Xbox Game Pass?

As a new IP that deals with a very odd concept, it’s understandable if you’re a bit hesitant to pay $60 for Biomutant at launch. If you have Xbox, you might be wondering if it’s on Xbox Game Pass so you can play at no additional charge. As of May 2021, however, Biomutant is not on Xbox Game Pass.

Some brand new games like MLB The Show 21, Knockout City, and the upcoming Dungeons & Dragons: Dark Alliance have come to Xbox Game Pass on the day of release, but Biomutant is not a day one Xbox Game Pass title. That said, the launch FAQ says it’s only not on the service “for the time being,” so it’s possible that it will get added in the future.

What do the Biomutant reviews say?

Reviews are somewhat mixed, with Biomutant currently sitting at 68 on review aggregate site Metacritic. Inverse enjoyed our time with the game. “Experiment 101 and THQ Nordic have created one of the most memorable games of 2021 by leaning into its weirdness,” we wrote in our review.

IGN was more mixed, giving it a 6 in their review. “With excellent enemy creature design, a rich and diverse world, and piles and piles of choice when it comes to combat and customisation, Biomutant has a lot of the building blocks of a top-drawer action RPG,” the review explains. “It’s really missing only a few, but they’re big ones.”

Other reviews aren’t as positive. Video Games Chronicle gives the game just 2 out of 5 stars. “Biomutant’s feature list seems to include everything a successful open-world action RPG needs,” the review asserts. “But journey through its towns, fields, and bunkers, and there’s no intrigue in its exploration or weight in its relationship building. Not even a worthy combat challenge to hold everything together.”

Biomutant is a very weird game that’s not for everyone, so you’ll probably want to check out the game for yourself to determine whether you like it or not.