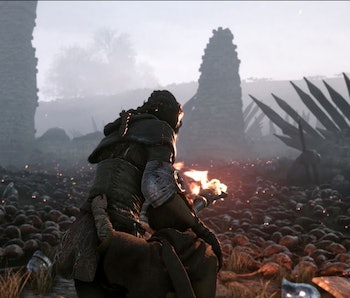 There is no better tonic for despair than perspective.

And as we languish through the bitter end of Covid-19 (in the U.S. at least) it can be tempting to dwell on the many, many bad things the last year has wrought. But it is useful to remember that humanity has been here before, that buried deep in our collective consciousness is a survivor’s sensibility and a time-tested resilience. This seems grand and heroic until you realize it’s actually quite pedestrian. There have been billions of survivors throughout history, it's not reserved for a canonized few. What if there was a game that put you in the role of a vulnerable survivor doing their best to navigate the chaos of a brutal pandemic?

A Plague Tale: Innocence, from Asobo Studios and Focus Home Interactive, is a remarkable game for many reasons. But first, you’ll be struck by the unconventional protagonist - Amicia, a 15-year old girl living in France in the year 1348.

Don’t be fooled by her age, Plague Tale wastes no time getting very serious, very quickly, as Amicia witnesses her parents’ murder by a political rival and has to flee her home along with her five-year-old brother, Hugo. Hugo suffers from a strange medical condition that may have mystical origins. This touch of magic is seen in the plague itself. Not just a disease, but a blight of millions of rats. It feels otherworldly because, as you eventually learn, it is.

Amicia learns a lot more than the nefarious wizardry fueling not only the plague but the political machinations that made her family a target. She goes from living the comfortable life of a rich girl on a sprawling estate to a fugitive orphan with no money, no connections and nowhere to go except forward. Plus, she’s got a little brother in tow who is in poor health and doesn’t understand what’s going on. The writing and character development are superb, with Hugo especially being a nuanced character instead of a bratty caricature. The game is dripping with atmosphere and immersive drama. (And if you want to up it a notch I recommend playing in French with English subtitles).

The mechanics are interesting, too. Plague Tale is a stealth game at heart, with much of the tension coming from sneaking past bandits and soldiers aided by the usual set of video game distractions (e.g. throwing stuff to make noise). But then there’s the rats. The massive swarms of rodents are treated as an environmental puzzle/threat. If Amicia walks into one you are instantly devoured, so you have to scatter the critters by shining light on them. This sounds basic but Asobo gets a surprising amount of depth from this mechanic. At first, it's as simple as lighting torches (or extinguishing them to turn the rats loose on enemies) but by the end you’re navigating ancient crypts and aligning angled mirrors to push piles of rats into contraptions that open locked doors and the like.

Plague Tale is the rare game that reminds us heroics are not the exclusive province of metahumans, space marines or bandicoots. Ordinary people have endured extraordinary circumstances every single day throughout history. It shows us how we lean on our wits, our love and our relationships to navigate the worst of life — be it in fourteenth-century France or right here, right now.