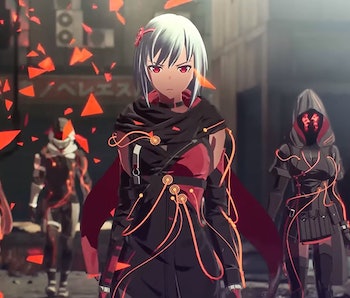 2021 has been a killer year for role-playing games. Titles like Tales of Arise, Neo: The World Ends with You, and Ys 9 were absolute genre highlights. But one RPG in particular from developer/publisher Bandai Namco Entertainment is one of the best and most stylish that the company has produced in years. Better yet is that it’s available on Xbox Game Pass on PC, console, and cloud as of September 30, 2021.

The game we’re referring to is Scarlet Nexus, which was released for PlayStation 4, PlayStation 5, Xbox One, Xbox Series X|S, and PC in June 2021. In it, you play as Yuito or Kasane, each a teenager with parallel campaign storylines. Each narrative is noticeably different, clocking in at around 20-25 hours of playtime across each, making it more than worthwhile to play through both.

The game follows members of the Other Suppression Force (OSF), who aim to stop deadly and bizarre creatures known as the Others. In it, you and your fellow group of heroes use extra-sensory abilities to fight the otherwise insurmountable monsters. Along the way, you explore the city, interact with characters to form bonds, and master the art of supernatural combat.

Scarlet Nexus is immediately captivating thanks to its beautiful visual style reminiscent of anime classics like Evangelion. It takes place in a near-future version of Tokyo with decidedly cyberpunk vibes, making it feel familiar yet foreign.

The characters have Psychokinesis powers, allowing them to chuck heavy objects at enemies — such as cars, large rocks, and even trains. While that might be enough to grab your attention, what works well is the way the game effectively blends combat and story.

A chaotic blend of action and narrative

Scarlet Nexus isn’t your run-of-the-mill action game, however. On the surface, it may feel like a more straightforward button-masher from developers like PlatinumGames, but there’s a compelling amount of nuance to combat systems. Each of the main characters has their own combat style. Yuito excels in close-quarters scenarios with faster, lighter weapons while Kasane is better suited to long-range encounters. Things get even more fun as they level up and you unlock more abilities in their unique skill trees.

While the melee combat is fun on its own, mixing in the Psychokinesis powers takes it to a new level. Skilled players can easily chain together melee attacks, followed by throwing a nearby object for maximum damage. Once you get into the flow, you’ll find yourself swapping through different attacks fluidly, while mixing in some thrown items, as well. It’s a satisfying system that feels unexpectedly ambitious.

The kicker is that Scarlet Nexus also incorporates visual novel elements with a major emphasis on story and characters. In fact, the bonds you share with the supporting cast have implications during combat, rewarding you for spending time with your squadmates. This is similar to Fire Emblem: Tree Houses or the Persona games, wherein you’re encouraged to spend time with friends.

Aside from the gameplay benefits, interacting with the other characters is flat-out engaging, as many of them are lovable and memorable. Even if you don’t necessarily agree with the characters, most of them are enjoyable to converse with since they’re so well-written.

Tying the whole thing together is a narrative that will almost certainly sink its hooks in you. There are plenty of memorable moments sprinkled throughout, telling the story of how this group of heroes overcomes the deadly creatures that roam the earth.

Scarlet Nexus isn’t without its issues. The camera can get wonky, and the 40ish hour runtime can feel a bit long, but overall, it’s one of the year’s best action RPGs. Since it’s now on Xbox Game Pass, you can dive in without spending an additional penny.