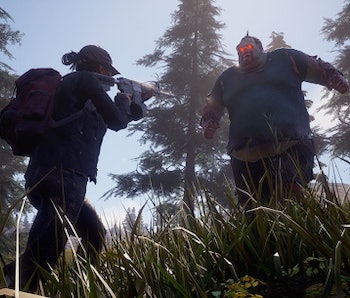 Zombies are the feature attraction in the Getting Killed In Video Games Hall of Fame. It’s impossible to count the number of games that involve dispatching the undead, from medieval fantasy dungeons to abandoned space stations to backyard gardens we’ve been killing zombies in every way, shape, and form for about as long as we’ve been gaming. The last decade saw a veritable zombie boom driven by the popularity of AMC’s The Walking Dead that only recently began to fade. Zombie modes became a feature in the hottest shooters, and a whole genre of rugged survival games was born from Arma 2 mods that added zombies to the mix.

But the secret to a great zombie story is not in the bloody body count of the undead, but in the attachment we feel to the human characters living through the nightmare. Most games do this with captivating main characters who are central to a thrilling adventure, while a few skip stories in favor of anonymous sandbox protagonists. Virtually none capture the sense of community that would exist in a true zombie apocalypse.

I’m talking about State of Decay, the zombie apocalypse sim from Undead Labs. There are two games in the series available on Xbox Game Pass, with State of Decay 2: Juggernaut Edition offering the most up-to-date experience in managing a thriving community of zombie attack survivors.

What makes State of Decay 2 stand out from the teeming horde of other zombie titles is that you don’t just play one character, you play all the characters. You’ll start out choosing a pair of survivors to begin your journey but soon you’ll add more playable followers to your roster.Playable isn’t just an option here, it’s mandatory. Your survivors incur injuries and suffer from fatigue which requires them to sleep and recover. Stay with a character too long and their stamina depletes to almost nothing, and without the ability to run or swing a modified lawnmower blade machete you won’t last long out there.

And what is out there? A whooooooole lotta stuff. Your community of survivors requires a constant supply of food, medicine, ammo, building materials and fuel in addition to dozens of inventory items like ranged and melee weapons, health and stamina consumables and crafting materials for custom weapons and base upgrades. Each in-game day depletes your reserves depending on the configuration of your home base. So you’ll be venturing out often on supply runs to abandoned neighborhoods or to establish outposts that deliver these resources automatically. There are limits to the number of outposts you have, as well as limits to the things you can build within your base. Do you want a farm or an armory? An infirmary or workshop?

The ever-changing mood of your community of survivors will dictate some of these decisions, including the decision to abandon a base and move on to something bigger and better. The name of the game in State of Decay 2 is momentum. You always want to be finding more stuff, more survivors, more allies, and more space to live.

Survivors bring a range of skills and backstories to your community, and gain experience the more they scavenge and slaughter. They also die permanent deaths which, in some cases, can feel devastating. I vividly recall watching my lone cook get ripped in half by a juggernaut zombie and instantly getting anxious about all the food supply buffs I just lost. Because characters are more or less a blank slate with customizable wardrobes, it’s easy to get unreasonably attached to some and loathsome of others.

State of Decay 2 offers three massive maps to explore, as well as multiple game modes including a harsh survival mode and cross-platform multiplayer. It’s the perfect tonic for curing ( or reigniting) your zombie fever, especially if you’re counting the days until Army of the Dead releases next month. Because if there’s one thing 50+ years of zombie pop culture has taught us it's that zombies don’t die, they multiply.