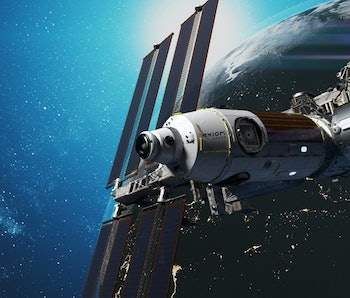 SpaceX's Crew Dragon is set to help build a successor to the International Space Station. One of the new space station's developers describes it as "a thriving home in space that benefits every human everywhere."

The "AX-1" mission, launching no earlier than January 2022, will send four private citizens to the International Space Station using the firm's human-carrying capsule. Axiom Space, the Texas-based company organizing the mission, is using it as a means to lay the groundwork for its own space station.

Want to find out more about what the space station will be used for, when it will be built, and how it could support crewed missions deeper into the Solar System? Read the full interview, only in Musk Reads+.

The International Space Station can't last forever. The station was finished in 2011, but international partners have only cleared its use up until December 2024. NASA awarded Axiom Space a $140 million contract in January 2020 to attach at least one habitable commercial module to the ISS.

The move could follow a similar path to the Crew Dragon itself. When NASA's shuttle program ended in 2011, it had to use Soyuz rockets taking off from Kazakhstan to send its astronauts to the space station. The Commercial Crew program tasked SpaceX and Boeing with developing new capsules that could complete the same trip.

A private space station from Axiom Space could ensure NASA isn't left in a similar position again, with a decommissioned ISS and nowhere to send astronauts.

The "AX-1" mission — not to be confused with the "Inspiration4" mission advertised during the Super Bowl — will help pave the way for this station by training up the team in skills required to run a space station. It will also build up relationships with potential commercial partners.

The mission will send four crew members to the International Space Station for eight days:

Beyond Axiom Space's initial space station, the mission could ultimately precede the establishment of multiple space stations in low Earth orbit, acting as a new hub for humanity.

TO CONTINUE READING THE FULL INTERVIEW, SUBSCRIBE TO MUSK READS+.

More like this
Science
Oct. 1, 2022
NASA Crew-5 launch: Timeline, how to watch this historic ISS mission
By Harry Stoltz
Science
Oct. 1, 2022
Elon Musk hints at a first Starship orbital flight date — and its quite soon
By LAURENCE TOGNETTI and Universe Today
Science
Sep. 30, 2022
SpaceX and NASA just unveiled an ambitious plan to save the Hubble
By Doris Elín Urrutia
Related Tags
Share: