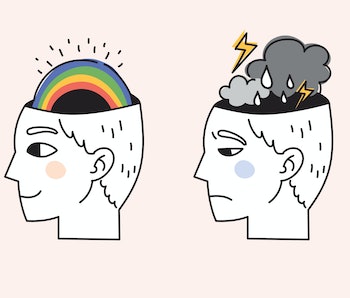 Mental health is a doozy of a topic. It’s loaded with all sorts of assumptions and pitfalls, and trying to generate awareness on any issue is tricky because of the sensitivities and liabilities involved. That doesn’t stop video games from trying. Most portrayals in games are equal parts inaccurate and unflattering, with one 2019 study finding that 97 percent of portrayals of mental illness in video games are negative.

Still, ignoring mental illness isn’t a solution either. So how can video games succeed at talking about mental health in the larger sense? Won’t a game that deals with difficult issues like depression and anxiety be a bummer? Is there really a game that offers genuine empathy and insights on mental health in a way that’s actually fun?

Psychonauts is a hybrid platformer and adventure game released by Double Fine in 2005. If you’re familiar with titles like Grim Fandango and Sam and Max, then you’ve got a good sense for the kind of irreverent writing and distinct aesthetics that made Psychonauts a stand-out hit when it was released.

The story takes place in a world where psychics and psychic abilities are quite common, and specially trained agents known as Psychonauts use these powers to help maintain order in a chaotic space. Your game follows Raz, a young boy and psychonaut-in-training who goes about using his powers to journey into the minds of other characters to help diagnose their troubles and solve their problems.

The gameplay involves using a range of powers from the action-y, like telekinesis and pyrokinesis, to the more introspective, like a clairvoyance that allows you to see through other characters' eyes and learn what they really think of you. Raz uses his powers to traverse a myriad of maps, from the steampunky main world to the truly bizarre inner workings of characters' minds.

Seriously, the aesthetic breadth of this game cannot be overstated. Because Raz ventures into an asylum he experiences levels that are loosely themed around mental illness, and discovers things like literal emotional baggage (in the form of anthropomorphized suitcases) to uncover repressed memories and inner demons. These levels can be breathtaking in their wild, unbridled creativity making them a joy to explore. Be adventurous and you’ll be frequently rewarded with a ton of found narrative moments too.

Beyond that, Psychonauts is a game that gets mental illness right. It doesn’t traffic in stereotypes or clichés, instead focusing on destigmatizing emotional issues by allowing you to explore the minds of characters who don’t seem to have any problems until you dig deeper and reveal the truth that everyone, everywhere is dealing with something. This empathetic approach, coupled with amazing gameplay and captivating level design, led Psychonauts to have such a passionate following that the upcoming sequel was successfully crowdfunded more than a decade and a half after it was released.

Psychonauts is available now on Xbox Game Pass, giving you just enough time to dive in before Psychonauts 2 releases on August 25. Need another reason to play? It’s good for you, too.