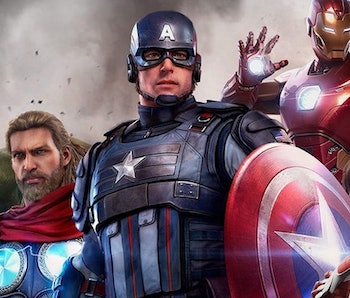 You're enjoying the latest experience playing as Marvel's premiere superhero team, the Avengers in Marvel's Avengers. Unfortunately, you've started this journey on your lonesome, without your friends to aid you in combat. That's not very Avengers of you. Let's remedy that. Here's how you unlock co-op in Marvel's Avengers and join your other powered pals.

How to unlock multiplayer in Marvel's Avengers

When you begin the Marvel's Avengers beta, you'll be dropped smack dab into the middle of a mission taking place on the Golden Gate Bridge. This is the famous A-Day demo that's been making the rounds since last year. Finish it to proceed onto more campaign missions. This string will conclude with Missing Links, which takes Kamala and Bruce Banner to a Snowy Tundra area in a quest to further recoup the Avengers lost assets.

Once completed, you'll finally enter the Chimera Helicarrier. Bruce will have some busy work for you to do. Finish his minor tasks like cleaning up the Helicarrier and establishing security measures to unlock the War Table. You'll use the War Table to choose missions and link up with your good pals. You have now unlocked multiplayer, but utilizing it is a whole other bag.

How to play multiplayer in Marvel's Avengers

Once you've unlocked the War Table, all that's left for you to do is choose your mission. Select any mission and you'll be taken to a matchmaking screen. You can then invite friends to join you on your quest by pressing the boxes below your nameplate with 'plus' symbols. When they join, they'll have to select a hero, but it can't be somebody currently in use by another party member. No two hulk duos!

You can play any available mission with your friends. Perhaps you're the only one to have unlocked the secret mission? That doesn't matter. If you select it, your friends can play it. You can also veto a selected mission by pressing the touchpad.

Don't worry about carrying them on a super difficult mission either. Enemies will scale to the weakest person in your party i.e. your friend Paul who loves Marvel movies, but never plays games.

Anyone in your party (including Paul) has the power to select and veto missions. There isn't an explicit party leader system as what you might find in other games of this nature like Destiny. Once you've completed a mission, you'll have the ability to continue playing with the same group. Your party will automatically remain together. If you're playing linked missions like campaigns or the HARM room, you can seamlessly go from mission to mission by checking that option upon completion of a mission.

Either way, you're free to make a real Avengers team with you pals this magical beta weekend.

Marvel's Avengers beta is currently available on PS4. Find out when it will come to your platform here.