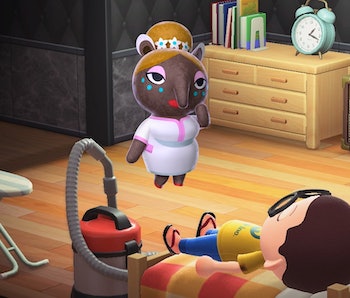 One beloved form of Animal Crossing multiplayer might soon make its way into New Horizons because a new batch of leaks indicates that one day soon players may be able to step into the Dream Suite to interact with the dreamy Luna.

Just how accurate are these leaks and when might players be able to expect the update?

On Thursday, reliable data-miner Ninji outlined his theory about Dream Suite via on Twitter, based on some in-game code he discovered. He explains that "DreamID" has been present in part of the game's save file since 1.0.0. During update 1.2.0, "ActorNetDreamLand" was added, along with more packing data that saves the state of an island for a server. While this is all technical jargon, it all points to players being able to save their island in a certain state that allows them to get a Dream ID that allows other players to visit it.

The technical process might resemble the Dodo Code system that currently lets players visit each others' islands, except this variation would exist within dreams.

What is the Dream Suite? The Dream Suite was an island-visiting feature first introduced in Animal Crossing: New Leaf. Run by a Tapir named Luna, this service lets players upload a version of their island online. After that, players can visit your island and you have the ability to visit theirs.

It still has some practical use in Animal Crossing: New Horizons. For example, if you put a lot of work into designing your island and want to show it off to others but you don't necessarily want to host visitors or make friends, this feature lets you achieve that at no risk to yourself or your island. (Because dreams aren't real!)

This is also a welcome addition for players who want to see what other players are doing with the tools that Animal Crossing: New Horizons provides to players, if only to get creative inspiration for the development of their own island.

When might Dream Suite be added to Animal Crossing: New Horizons? As of right now, the Dream Suite remains little more than a theory backed by several lines of code within the game, so it's inclusion in Animal Crossing: New Horizons remains uncertain. Because of that, we don't know exactly when it will be added to the game. We also have a clear roadmap for in-game events through the end of June, but a feature like this would probably exist separate from any particular event — which is to say it could happen at any time.