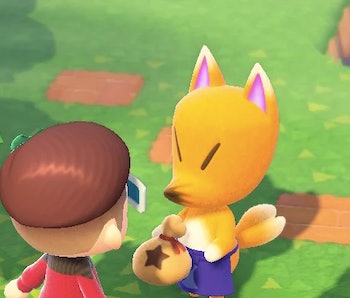 Amongst the many additions made in Animal Crossing: New Horizons latest update, Redd the Fox has arrived as the island’s latest denizen. Redd has brought with him a collection of paintings and other art to collect and then donate to Blathers’ museum. If used properly, his goods can be a boon for your collection, however, he could easily become a blight on your riches. So who is Redd and how do you handle them properly?

Who is Redd the fox in Animal Crossing?

Redd the fox is a recurring huckster in the Animal Crossing series. He’s primarily known for his shady art dealings. Redd will bring a mix of fake and genuine famous paintings to your island, and if you can pick out the real ones, they can be donated to the museum. Now that you’re probably enamored with the guy, how do you unlock Redd the fox?

How to get Redd on your island in Animal Crossing: New Horizons

Redd will join your island after you upgrade Resident Services. You also need to have donated at least 60 subjects to Blathers’ museum, according to Ninji.

Once both requirements have been met, you’ll be able to discuss art with Blathers. The following day, Isabelle will have an addendum in her morning announcement, warning you to watch out for shady art dealers.

After the announcement, find Redd walking on your island. Interact with him. You’ll face some car-salesman tactics, like naming a price then drastically lowering it, but you will walk out of the conversation with your first art piece. This one is random, but it will always be genuine. Take your first piece to Blathers. He’ll accept the piece and open a new wing just for art, this will cause the museum to close for a bit.

Isabelle will mention the museum’s reopening in her morning announcements a few days later. You can find Redd roaming around on that day as well. Speak to Redd and then go to the tiny beach on your island’s northern section, which can be reached by either terraforming or ladder. You’ll find Redd’s ship, the Treasure Trawler, which will be stocked with art pieces of varying legitimacy.

Where to find Redd in Animal Crossing: New Horizons

After the initial event, Redd will return to your island at random. He doesn’t have set days like other merchants, so you’ll just have to wait it out or use time travel. When he returns, the Treasure Trawler will be in the same location as before, but you’ll need to find him on the island first. Once in his shop, you can purchase one piece of art from him per visit, so make sure that you buy a real one.

How can you tell the difference between a real and a fake?

Every piece Redd sells will be based on a real-life work of art. If it’s fake, the piece will have a slight difference from the real one. For example, Redd’s Mona Lisa forgery gives her a pair of eyebrows. His version of Venus De Milo has longer hair. Each fake has a distinct visual difference you can spot. They won’t be labeled by their real-world names until after you’ve donated them to the museum, so make sure you choose the right one.

On the off-chance that you mess up, change users on your Switch. Each registered player can purchase one piece per visit. If there are four users on your switch, you could theoretically purchase everything he brings, therefore obtaining your genuine art piece with certainty. This would definitely be a pricy way to go about it though.

You can’t do anything with fake art pieces. Not even famed scammers like Timmy and Tommy will buy them off you. Your only options would be to either throw out the fake or display it somewhere on your island.

Is Redd the only way to obtain art?

Given Redd’s random schedule, obtaining all the art can feel like a hopeless goal. Fortunately, Redd isn’t the only way for you to acquire art. Twitter users have mentioned other villagers randomly giving them art pieces. Redd is likely the only reliable way for you to get art, but he’s certainly not your only hope. If you need more art inclined villagers, you could always try unlocking new ones.