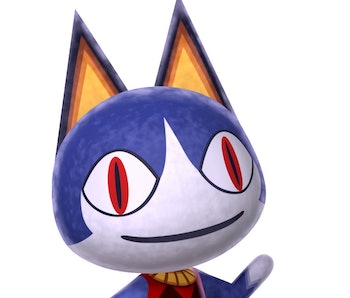 Nintendo outlined every Animal Crossing: New Horizons event through the end of June on Tuesday, and the mysterious "May Day" event has piqued the interest of the game's community because it's said to feature the return of a character that didn't make the cut when Animal Crossing: New Horizons launched. But the reveal trailer has a major clue hiding in plain sight that this character is none other than Rover, the tuxedo cat.

The May Day event was revealed by Nintendo in a trailer on Tuesday alongside Nature Day, International Museum Day, and Wedding Season. The second of these four in-game events, May Day will occur from May 1 until May 7. "In the first week of May, players can use a one-time May Day Ticket at the island airport to head out on a limited-time tour to an island that looks different than the usual mystery island tours," the official description reads.

The press release also teases that "A special visitor who looks familiar might also be there…" This has spurred plenty of speculation about which Animal Crossing character could be returning, but the trailer has seemingly already confirmed that it's Rover.

When the trailer showcases the May Day event from 1:09 until 1:13 in the above video, the player is seen running around in some kind of maze created by bushes and holes in the ground, but you can see a character standing with its back to the camera at the top-right corner of the screen. We never see their face, but based on the shape, colors, and clothing that creature is unmistakably Rover.

He appeared in The Roost in Animal Crossing: Wild World and would give players the ability to send messages in bottles to other players' islands. Animal Crossing: New Horizons vastly increases how much control players have over their appearance and the Switch's system clock sets time automatically, Rover didn't have much of a purpose, so he was not present in the game at launch.

The Inverse Analysis — While we don't see his face or learn exactly what he will be doing based on the event trailer, this is the first appearance of Rover in Animal Crossing: New Horizons. As we approach the game's next event after Nature Day, we will get a better idea of what exactly his role is. If Rover's previous roles are any indication, then he could be a pretty big addition to the game — or just a one-off addition for the event. Either way, we'll know more in late April just before the May Day event launches.