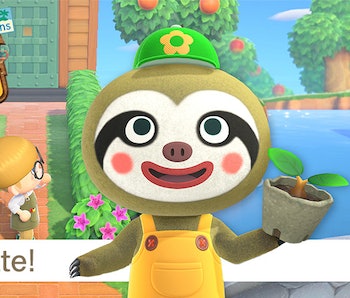 Animal Crossing: New Horizons' latest update has arrived as of April 23, and the 1.2 update adds events through the end of June to the game. The first of these events is Nature Day, and with the event comes a returning Animal Crossing character called Leif the Sloth. He introduces new plant-based items to the game and pops up on a schedule that might seem familiar to most players. Here's everything you need to know about the sloth and what he has to offer.

Leif is a male sloth that was introduced in Animal Crossing: New Leaf who ran that game's garden store. In the mobile game Animal Crossing: Pocket Camp, his role evolved into being the mascot and main vendor of a spring event that focused on Earth Day. In Animal Crossing: New Horizons, Leif does a little bit of both: He's now a weekly plant vendor that'll visit your island once a week just like Kicks, but he's also heavily associated with Nature Day this year.

Does Leif only appear during Nature Day?

As long as your game is updated to the latest version, Leif should appear on your island starting April 23. Leif is guaranteed to be present on your island during Nature Day, which takes place between April 23 and May 4. (Unless someone like Kicks was already on your island before you updated the game.) Like any other Animal Crossing: New Horizons vendor, this plant-obsessed sloth will be in your town's plaza after Resident Services has been upgraded.

IGN claims that Leif will randomly appear on your island after Nature Day concludes like other vendors such as Kicks. If you can't play Animal Crossing: New Horizons during the Nature Day event for some reason, it seems that you don't have to worry about getting everything Leif sells right away, though he isn't guaranteed to be there anymore. Nature Day will involve many plant-based tasks you can accomplish with Leif's help to earn bonus Nook Miles.

Check out Inverse's deep dive on everything Nature Day has to offer.

What does Leif sell in Animal Crossing: New Horizons?

Leif is a vendor that will sell a variety of plant starters. The headlining items of his inventory are the shrub starters, as these are a new type of plant added in Animal Crossing: New Horizons' latest update. In addition to that, Leif will also sell flowers that are not normally available on your island or in Nook's Cranny. If you like to make your island look as beautiful as possible, Leif is poised to be a very helpful vendor for you.

Bonus tip: Sell your Weeds to Leif instead of the Nooks. He'll give the player 20 Bells per Weed as opposed to the usual 10 Bells that the Nooks buy it for. Leif truly is a 4/20 mascot. All weed jokes aside, you should take advantage of this deal as you get around to ridding your island of all its weeds. It's something a lot of players will be doing with Nature Day's emphasis on decorating the entirety of your island, so this is a useful bonus for him to have.