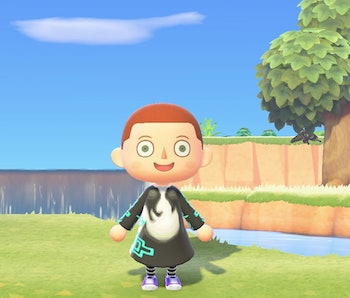 While some people play Animal Crossing: New Horizons to partake in simulation shenanigans like crafting items, building out a town, or make a few animalistic pals, others understand the game’s true purpose: cosplay. One of the best parts of New Horizons is using the design app to live life as your favorite fictional characters.

If you want to get started on experiencing New Horizons’ true purpose, we’ve rounded up 14 starter costumes from popular Nintendo properties. Don’t experience tree chopping like your surly old self, do it like Link!

If you want to obtain a costume listed here, all you need is a cell phone with the Nintendo Switch Online app. There’s a bit of special set-up process involved, but thankfully we have a whole guide focused on how to use QR codes in New Horizons.

If New Horizons has placed a craving to become the Hero of Hyrule during your island life, this section has you covered. We found perfect renditions of multiple Link tunics, like the blue one he donned in Breath of the Wild or his classic green garb. There’s also a very special costume based on Midna from Twilight Princess.

Breath of the Wild Link

You explore and manage friends based on animal life in Pokémon and do a similar task in New Horizons. The only difference is that you can't order Tom Nook to shoot flames from his face orifice at K.K. Slider. Of course, you'd want to bridge the gap a bit more by donning Pokémon Trainer attire. You can make yourself look like the iconic protagonists of Ruby and Saphire, Red, or Ash Ketchum himself. The choice is yours!

Brendan and May from Pokémon: Ruby and Saphire

Ash Ketchum from the Pokémon anime

2019 and 2020 have been massive for Fire Emblem: Three Houses. The latest title in the JRPG series is steeped in just about every emotion, and the big news just keeps coming, from the Cindered Shadows DLC to the disappointment that greeted Byleth's arrival in Smash Ultimate.

No matter your feelings on the franchise, you can't deny their cast dresses extremely well. Now, courtesy of DeviantArt user, ACNL-QR-CODEZ, you can dress just like the students of Garreg Mach monastery, which means you can look extra fly too.

Byleth and the three house leaders: Claude, Dimitri, and Edelgard

If you hate all that house affiliation and simply want to say "I like Fire Emblem: Three Houses," try the academy uniform.

Is your cosplay of choice an Animal Crossing villager? Why not the one who stars in Smash Ultimate? Sure, their visage has been dragged through the mud online as a possible ax murderer, but you're not going to hold that against them, right?

Now that you're done with this, there's a whole world of fashion at your disposal. If somehow, you got through this list without finding an outfit that struck your fancy, perhaps it would be for the best if you crafted your own attire through the online editor. There's nothing holding you back from your best fictional self!

More like this
Gaming
1 hour ago
Fire Emblem Needs To Steal a Winning Strategy From the Yakuza Games
By Hayes Madsen
Gaming
Jan. 30, 2023
Everything We Know about the Fire Emblem Engage Expansion Pass
By Jess Reyes
Gaming
Jan. 28, 2023
James Bond’s greatest game ever just hit Game Pass and Switch
By Mo Mozuch
LEARN SOMETHING NEW EVERY DAY.
Related Tags
Share: