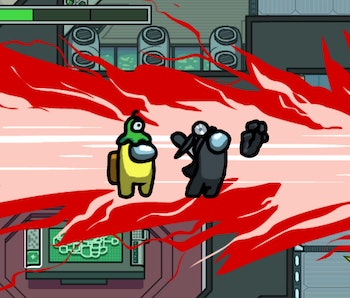 Server issues are rampant in Among Us, the hit indie multiplayer game where players attempt to deduce who the killer is on their spaceship. Occasionally when you're trying to log into an Among Us match, several different errors might pop up.

With console versions paling in comparison, we're walking you through some of the most common errors in the game on PC and mobile, along with what you should do if you come across them so you can get back to playing as soon as possible.

What are some Among Us server errors?

If the Among Us servers are under stress and not working well, there are many errors that can pop up. Messages related to this will often contain jargon that's difficult to understand. The first of these messages references a "Reliable packet 1" with a certain size and number of milliseconds it could not be accessed by.

This is the message used when Among Us' servers are down and pretty much no one in your region can access it.

The quickest workaround is to try and change to the server region you are playing Among Us in. This can be modified via the globe icon on the bottom of the screen. The connection may be slowing if you switch to Europe or Asia from North America, but it might also circumvent this issue. Alternatively, you can try restarting the game or waiting a while before you play Among Us again, so the server issues pass.

"Could not send data as a SocketException occurred: Network is unreachable" is another message that pops up on mobile when trying to play over a 4G or data connection.

"Forcibly disconnected because: ReliablePackWithoutResponse" and "Sent pings that remote has not responded to" will crop up when your game is having trouble connecting to the servers.

The easiest way to avoid these errors is to play on a solid and stable Wi-Fi or ethernet connection. Server issues can occasionally influence these as well, so if you're still getting these messages in Among Us after ensuring you have a great connection, you can refer to the steps listed above.

What are the most common error messages on Among Us when joining games?

While the errors above are based on server issues, there are still a couple of unrelated messages that can pop up as players try to join a game of Among Us. If you get a message that says, "The game you tried to join is full. Check with the host to see if you can join next round," then it likely means the match you are trying to get into is already full. If you try to join a game that has anywhere between 7 to 9 players already in the game, chances are it might fill up as you're selecting the lobby. So it's best to pick matches that are at 6/10 or fewer.

Meanwhile, "The game you tried to join already started. Check with the host to see if you can join next round" means the game is underway, and there's no way for you to join. If you're playing with friends and know for sure that these errors aren't accurate, the only real workaround to this is to keep attempting to join until it actually works. Hopefully, that doesn't take many tries.

Finally, if you get a message that says the matchmaker is full, your best option is to wait it out and play Among Us later, as it means too many people are online at the moment. If you do try to play, you may run into one of the many server issues listed above as a result.

Among Us is available for PC, iOS, Android, Nintendo Switch, PlayStation 4, PlayStation 5, Xbox One, and Xbox Series X/S.