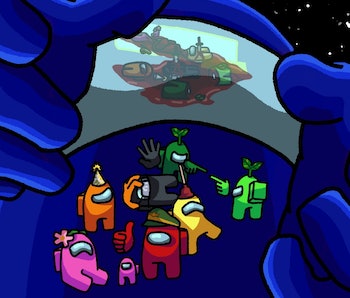 On Tuesday night, the worlds of Twitch streaming personalities and U.S. politics collided. Congresswomen Alexandria Ocasio-Cortez and Ilhan Omar played indie game sensation Among Us with several popular Twitch personalities on a livestream aimed at encouraging Americans to vote in the 2020 Presidential Election.

Esports consultant Rod Breslau reports that AOC's Twitch debut peaked at 439,000 concurrent viewers, making it the third-highest individual stream by viewership in the platform's history. Throughout the course of the three-and-a-half-hour stream, it introduced newcomers to the game's jargon, specifically what it means to "marinate" someone in the social deduction game.

Every game of Among Us begins with every player being assigned the role of a "Crewmate" who needs to complete tasks while avoiding being killed, or the "Imposter," whose sole task it is to kill the crew. To avoid suspicion, Imposters need to deceive the crew. "Marinating a Crewmate" is a popular strategy that AOC fell for during her Twitch stream.

Some highlights of AOC's first Twitch stream. The first clip is her reaction to Disguised Toast tricking her into believing he was innocent.

One of the Twitch personalities that played with AOC — Jeremy "Disguised Toast" Wang — was the Imposter in a round they played together. Instead of rushing to kill the congresswoman in-game, Disguised Toast opted to occasionally follow her around and appear non-threatening only in front of her. This was in hopes that she would vouch for him during crew meetings where the Imposter can be voted out by other players.

Disguised Toast tricked AOC into casting the game-ending vote for an innocent player, which meant the streamer walked away victorious. AOC got marinated.

"I was being marinated!" she exclaimed as the rest of the lobby laughed at what had just transpired. Disguised Toast later bragged about his conquest on Twitter, which had garnered almost 62,000 likes at the time of writing. But where does this strange term originate from?

The term was coined by the groups of Twitch streamers that have been binging Among Us since the tail end of summer 2020. But the strategy itself has long been used to net wins in the murder-mystery game since its 2018 launch.

This deceitful plan is wickedly effective when there's a sole Imposter left in the game. The murderer just needs to make sure they see the person they're marinating at least once after every meeting to instill a sense of false security around them. Then in the next meeting, the person being marinated will vouch for your innocence and you can misdirect suspicion to someone else.

That sets up for 50-50 situations at the end of the game, just like what Disgusted Toast did to AOC. Whenever there are two Crewmates or one Imposter left, the crew needs to cast a deciding vote or the next round the Imposter can win by calling for a fatal sabotage that forces the remaining crewmembers to split and be killed by the murder.

The fact that they're forced to vote will more often than not get them to vote off the player they're unsure of instead of the one that has constantly followed them around but not killed them all game. Once it gets to that point there's no coming back. You've been marinated.

Among Us is out now for PC, iOS, and Android.