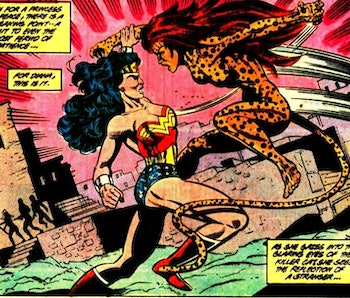 In another timeline, Wonder Woman 1984 would be in theaters this weekend. Unfortunately, there's still a handful of months to wait, but that leaves more time for fan speculation regarding the new villain Cheetah, aka Dr. Barbara Ann Minerva. We've seen glimpses of her before, but an unconfirmed leak could reveal her chilling true look.

Though nothing is confirmed, Reddit user AcRaider1020 posted what appears to be the joker in a Wonder Woman-themed deck of playing cards, featuring a waist-up look at Kristen Wiig as Cheetah with her hair slicked back, decked out in what looks like an actual cheetah print on her skin reaching up her neck, as opposed to, say, a catsuit.

The image also has a blue overlay, giving it an ethereal look that's very evocative of the 80s setting. The new look has drawn lots of comparisons, from the X-Men's Mystique to Catwoman herself, but the most obvious resemblance is to David Bowie. The androgynous glam-rock aesthetic of Bowie's Aladdin Sane and The Rise and Fall of Ziggy Stardust and the Spiders of Mars was hugely influential on pop culture and fashion throughout the 70s and 80s.

In the comics, Cheetah's form isn't too similar. She has the power to morph into a Cheetah-woman like creature, but the effect is something a bit more comic-friendly to the androgynous slick-backed look in the image. This look however, makes more sense. For a career archaeologist like Dr. Minerva, something sleek and streamlined would make more practical sense.

This isn't the first glimpse we've seen this new look. A previous leak used the exact same image, which could give this leak more credibility, or it could mean this playing card was photoshopped from that image and the rest of the figure is merely extrapolated. Reusing promotional images is commonplace, however, so there's really no telling one way or another.

The Inverse Analysis — If the leak is real, then Cheetah's role as villain looks to be far more chilling than we first assumed, when she was wearing the garb of a dowdy academic. The sleek, Bowie-esque aesthetic is just further proof Wonder Woman 1984 isn't doing its period setting by halves, and considering the somewhat drab palette of the first World War I set film, it's a welcome change.