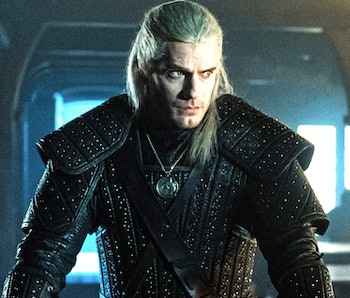 Production has begun on The Witcher Season 2. Plot details are still scarce and the Netflix series’ sophomore season isn’t expected to be released until next year. However, a new casting leak offers some clues as to where the series will go next and may also confirm a long-rumored character. The leak also offers a major connection to the games and books, that might reveal where Geralt of Rivia and Ciri are headed next on their journey.

A leak from Redanian Intelligence is reporting that two new characters will be joining The Witcher in Season 2. Paul Bullion as Lambert and Yasen Atour as Coën. Both characters are witchers who resided at Kaer Morhen, the fortress where witchers used to train. In fact, Bullion posted a brief video preparing for his swordfight sequences.

Fans of The Witcher video games will recognize Lambert as the younger, headstrong witcher who is openly jealous of Geralt for being more renowned than he is, though he hates his fated witcher status as much as Geralt does. The two aren't exactly the best of friends and this is apparent when Geralt pens a mean and embarrassing limerick about the younger witcher.

While Lambert serves as a great connection between the Netflix series and the games, Coën’s appearance will likely prove more interesting because of his importance to The Witcher books. Originally from Poviss, Coën plays a key role in training Ciri in the art of combat and swordsmanship during her stay at Kaer Morhen.

According to the leak, both characters are expected to appear in at least three episodes. We know that Geralt and Ciri’s paths finally crossed at the end of Season 1. In the books, Geralt takes Ciri to train at Kaer Morhen after their fated meeting, so it’s highly likely The Witcher Season 2 will follow the same course. It's even possible Geralt will leave Ciri to train while he goes in search for Yennefer, who disappeared after the Battle of Sodden Hill.

The casting leaks are interesting in that they might confirm the longstanding rumors of Vesemir's arrival in Season 2. Vesemir is the oldest and most powerful witcher at Kaer Morhen. He was like a father to Geralt and trained him during his time at the fortress. Vesemir is known for being wise, but also harsh sometimes. If Season 2 of The Witcher does venture to Kaer Morhen, it would be pertinent to include Vesemir.

The casting of Lambert and Coën strongly hints that news of Vesemir's casting is right around the corner. In any case, Star Wars: The Rise of Skywalker's Mark Hamill has already tossed his name into the ring to play the ancient witcher in Season 2, after eager fans online volunteered him for the role.

In addition, Carmel Laniado has been cast as Violet. It’s important to note that Violet is not a character from the books. Described as a “smart and sadistic” character, it’s possible Coën will train her alongside Ciri at Kaer Morhen before she goes her own way. While it's possible Violet isn't training to be a witcher at all, her age and description seem to suggest she'll be a student like Ciri.

It's possible all three characters will play significant roles early on in Season 2. There’s a chance they could appear in flashbacks instead, but now that the confusing timelines from Season 1 have merged, it’s less likely the series will look to the past to establish these new characters. Regardless of how they’ll factor into the show, their presence will help to expand upon the world of The Witcher and Geralt’s past all at once.

The Witcher Season 1 is available to stream on Netflix.

More like this
Entertainment
5.13.2022 11:30 AM
You need to watch the most thrilling South Korean time-travel movie on Netflix ASAP
By Nam Cheah
Entertainment
5.9.2022 5:54 PM
Mike Myers unravels his “silly” multiverse in Netflix’s Pentaverate
By Mónica Marie Zorrilla
Entertainment
5.1.2022 11:30 AM
Netflix May 2022: 9 mind-blowing sci-fi shows and movies you can't miss
By Dais Johnston
Related Tags
Share: