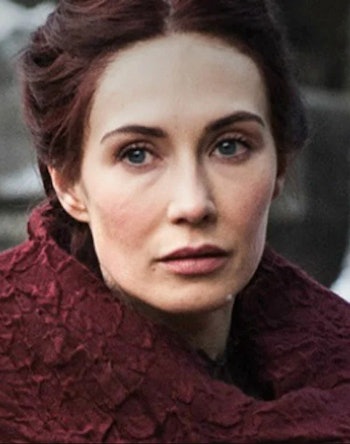 Winds of Winter has a lot of catching up to do.

In the first season of HBO's Game of Thrones, the death of Robert Baratheon started an all-out competition for the Iron Throne known as the War of the Five Kings. Among the strongest contenders was Robert's charmless, creepy younger brother, Stannis Baratheon. Throughout the first five seasons of Game of Thrones, Stannis fought tooth and nail, gathering an army and even resorting to Melisandre’s blood magic to get the title he believed was rightfully his.

Stannis dies at the end of Season 5 of the HBO series, but in George R.R. Martin's novels, he's still alive. The long-awaited Winds of Winter might see the elder Baratheon's story play out very differently, which might mean the books will tweak one of Game of Thrones's most horrifying scenes.

That moment is when Stannis agrees to let Melisandre burn his daughter Shireen alive. He believed sacrificing that most precious to him would please the Lord of Light and lead to a favorable outcome in the war for the throne. Instead, this was the beginning of the end for Stannis. His followers were disgusted and fled the camp, and his long-suffering wife took her own life in grief.

There's a decent chance Stannis's story won't play out precisely the same way in The Winds of Winter and A Dream of Spring. Here's what we know so far.

Appeasing the Lord of Light

Melisandre saw the potential in Stannis, and was a devout believer in his righteous cause to be king. Stannis officially denounced the old gods, taking the Red Woman at her word that he was the long-prophesied Azor Ahai reborn. Melisandre vowed to help Stannis take back the Iron Throne so long as he heeded her advice.

“I never asked for this, no more than I asked to be king. Yet dare I disregard [Melisandre]? We do not choose our destinies." —A Storm of Swords

In the HBO show, that resulted in the brutal deaths of Mance Rayder, the leader of the Free Folk, the blood sacrifice of Gendry Baratheon, Davos's death sentence, and Shireen's murder. One could argue that Stannis was clearly being steered by Melisandre, but that would remove any accountability on Stannis' part in the matter. Stannis made these choices because his ambitions were more important than the lives of those closest to him. In Game of Thrones, Stannis grew even more desperate and acted out of impatience, but his selfishness led him nowhere. That doesn't necessarily have to be the case for Winds of Winter.

Stannis’ actions in A Song of Ice and Fire

Game of Thrones’ portrayal of Stannis Baratheon was a bit different than Martin’s books. For one, book Stannis wasn’t quite as ruthless in his actions. Becoming king wasn’t so much a personal desire, it was a fierce sense of duty to his family and to the Seven Kingdoms that drove him.

His whole mindset revolved around a distinct code of honor, pride, and a strong sense for justice. He also had wanted to see Cersei and Jaime punished for their incestuous relationship under the law and her children stripped of their right to the throne.

“It is not a question of wanting. The throne is mine, as Robert's heir. That is law. After me, it must pass to my daughter, unless Selyse should finally give me a son. I am king. Wants do not enter into it. I have a duty to my daughter. To the realm. Even to Robert.”—A Storm of Swords

That’s not to say that Stannis wasn’t still burning people for not pledging fealty to him and his cause. He still burned Mance Rayder — or someone he believed to be Mance — for not joining him and following the Lord of Light. When we last left him, book Stannis wasn’t quite so dead-set on becoming king that he would murder his own daughter to ensure his success.

By the end of A Dance with Dragons, as well as in George R.R. Martin’s released chapters of Winds of Winter, Shireen was still very much alive. Stannis had just signed a deal with the Iron Bank in Braavos and had amassed a formidable army.

What's more, book Stannis made plans to ensure Shireen’s place on the Iron Throne should he die. Questionable as some of his actions may have been throughout the books, Stannis was shown to love his daughter and want the best for her. There was never any hint that he would even think to put Shireen in harm’s way, much less burn her at the stake, just to give him an advantage in the war.

The books may fix Stannis’ mistake

Shireen's death was among the most upsetting moments from Game of Thrones, and there are plenty of them to choose from. Stannis stood by and actually watched it happen while she cried out for him to stop.

The Winds of Winter could rectify the situation and redeem Stannis by steering him away from the terrible mistake he made in Game of Thrones. All signs seem to be pointing in this direction already. Stannis obviously loves Shireen and, in preparing to fight the Boltons, is far away from her that her death is unlikely to happen.

The prospect of keeping Shireen alive makes the fight for the Iron Throne even more complicated than what ultimately played out on the show. Whatever happens, both Stannis and Shireen’s fates are in George R.R. Martin’s hands now.