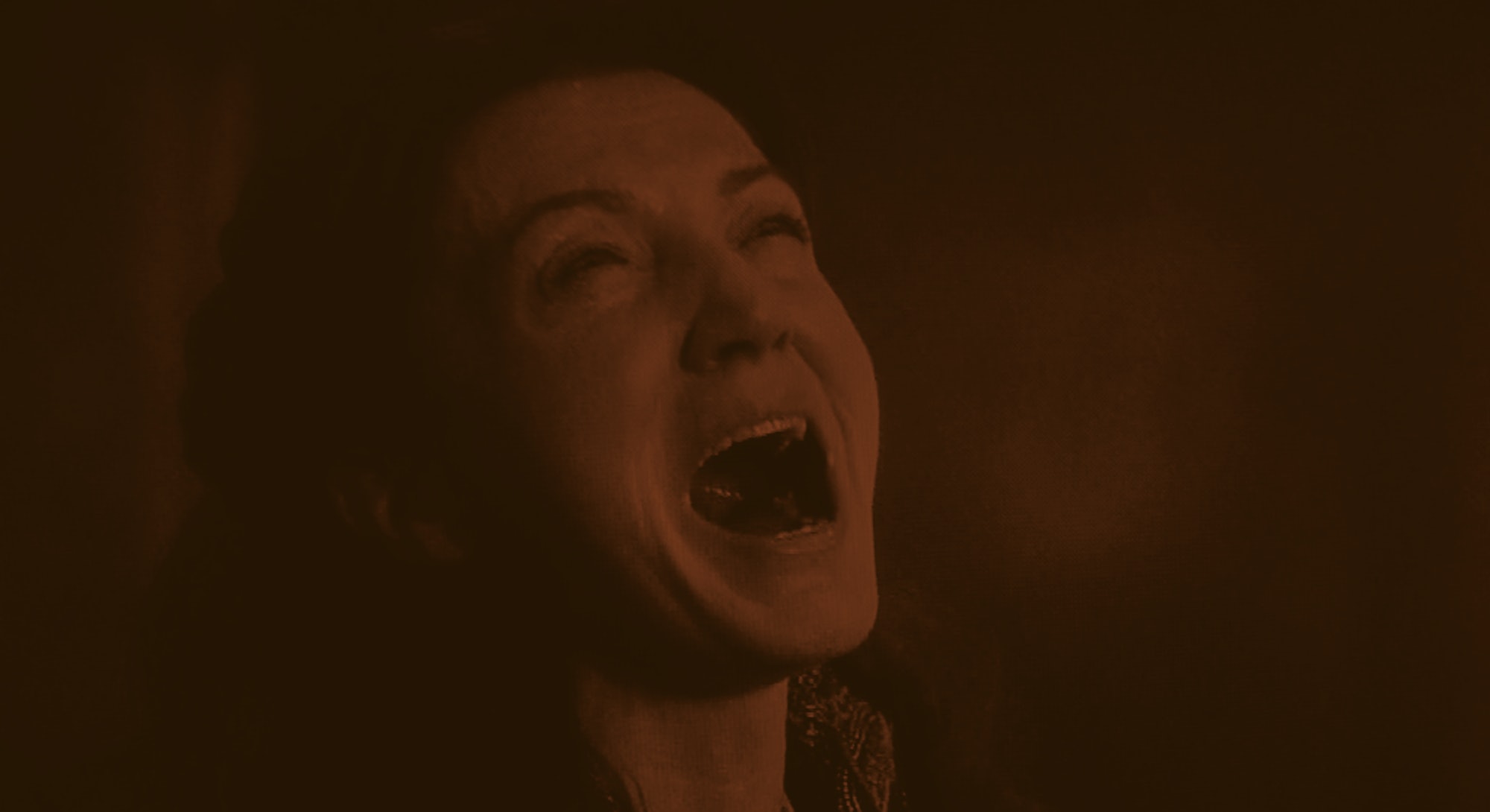 George R.R. Martin has big plans for Lady Stoneheart in The Winds of Winter.

The sixth book in Martin's A Song of Ice and Fire series has a tentative release date of 2021. Whether or not the release is delayed remains to be seen, but there's one thing that fans can be sure will happen — Lady Stoneheart will have a pivotal role to play. The character, the undead Catelyn Stark, was noticeably absent from Game of Thrones.

Fans and critics speculated for years about how she would eventually show up on the HBO series, but it ended with Catelyn still in her grave. Series showrunners David Benioff and D.B. Weiss told Entertainment Weekly why they decided to leave her out of the show altogether.

“Part of the reason we didn’t want to put it in had to do with things coming up in George’s books that we don’t want to spoil [by discussing them],” said Benioff.

The pair ultimately believed that Catelyn's death at the Red Wedding — where she and son Robb are killed by the Freys — was a good way to end her arc. They surmised that resurrecting her would've been futile and taken away from the impact of her death. Also, they had plans to bring Jon Snow back from the dead and concluded that Catelyn's return would've been one too many. That’s a rather strange reason considering that Benioff and Weiss kept Beric Dondarrion in the show, despite his multiple resurrections.

Martin, on the other hand, says he campaigned for Lady Stoneheart to join Game of Thrones because of the crucial role she plays in the books. It was his most ardent wish that she be included and it’s the one change he would have made to the show if he could. In the same EW interview, Martin discussed the reason for her importance.

“Lady Stoneheart has a role in the books,” Martin said. “Whether it’s sufficient or interesting enough. I think it is or I wouldn’t have put her in. One of the things I wanted to show with her is that the death she suffered changes you.”

Martin’s plans for Lady Stoneheart are game-changing and there are a few ways her story (and eventual death) could play out. The Winds of Winter may see her change one of the most irrelevant deaths from Game of Thrones and actually make it matter.

The events of the Red Wedding were cataclysmic and altered the trajectory of the North’s plight against King’s Landing. Following Catelyn’s death, the Freys threw her body into a river where it was later retrieved by Nymeria, Arya Stark’s direwolf. Three days postmortem, Catelyn’s corpse was found by Ser Beric Dondarrian and his Brotherhood without Banners.

Beric gave Catelyn the kiss of life to bring her back from the dead, but she was no longer the same person she was before. The kiss of life only partially healed her wounds and she lost the ability to speak, her compassion, love, and logic. Her sudden thirst for vengeance led her to take up with the brotherhood with the intent to kill the Freys and others who wronged her and her family.

In Dance of the Dragons, Catelyn attempts to kill Brienne for betraying her oath to House Stark and taking up with Jaime Lannister. Beyond that, Lady Stoneheart’s storyline has largely come to a standstill. If she’s to continue down this road, then nothing will change for her in The Winds of Winter. Of course, she could carry on killing and threatening, but we have to believe that Martin’s insistence on keeping her around is for some larger purpose.

The dead will live again

We know Catelyn was never a fan of Jon Snow, presumably the bastard son of Ned Stark and some unnamed woman. Catelyn never considered him a son and harbored a lot of resentment toward his very existence. You could say they had a very stone-hearted relationship.

A compelling fan theory suggests that Lady Stoneheart will give the kiss of life to the dead Jon and resurrect him in The Winds of Winter. This would change every aspect of Jon’s resurrection from Game of Thrones and poignantly bring his and Catelyn’s relationship full circle. At the moment, Lady Stoneheart doesn’t seem very interested in trekking to the Wall, but her reign of vengeance can’t go on forever. If her presence in the books is to showcase how much death can change a person, there’s no better way to do that than by bringing Jon back.

Ahead of Jon’s resurrection by Melisandre in the show, fans figured that he would come back a changed man. He’d be colder, maybe crueler somehow. However, Game of Thrones brought him back with no altered personality or feelings. He was the same old Jon as far as we could tell. This wasn't a personality-altering event, but a bump in the road.

Winds of Winter may make Jon's resurrection more meaningful by involving Lady Stoneheart instead of Melisandre. What’s more, it might allow Catelyn to let go of her bitter resentment toward Jon by bestowing him with the gift of life. Who knows? Lady Stoneheart’s actions may even restore some of the humanity that she lost after death.

This action would turn the tide for both characters and change Jon’s storyline in an important way moving forward. Jon could turn into a zombie-type like Catelyn or retain his humanity with a few glaring changes. Either way, something has to change or else Martin wouldn’t have kept her around.

There’s also a chance that Lady Stoneheart could make Jon legitimate in the eyes of the North. In the books, Robb’s will states that Jon is the heir to the North and is to lead it in the event of his death. Catelyn was aware of this and might somehow be reminded of it in The Winds of Winter. After all, Lady Stoneheart does have Robb’s crown in her possession, so why not pass it on to the son she never wanted? Jon has long questioned his place and purpose and it would be a moving moment if Catelyn thought to resurrect Jon for the sake of the North. It might take some time to get Lady Stoneheart to a place of sympathy, but what a twist it would be.