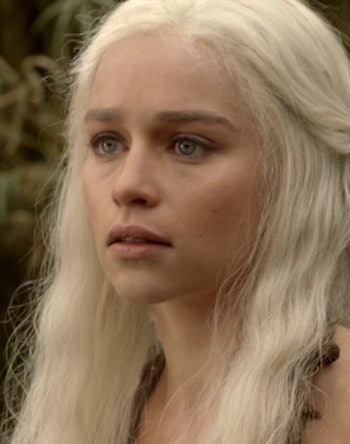 George R.R. Martin has a lot of questions to answer in The Winds of Winter.

Fans are hoping that the author’s been using his time in quarantine to finish the remaining chapters of The Winds of Winter, the sixth novel in his A Song of Ice and Fire series. He's made some progress, but the book’s release date has yet to be made official (it’s tentatively set to publish next year).

Waiting for more updates has given Westeros watchers plenty of time to ponder Martin's plans for the upcoming book. After all, the Game of Thrones series finale left a lot to be desired and the HBO series dropped several characters from the show completely. Martin's next books are a chance for redemption.

In Season 1 of the HBO series, Illyrio Mopatis was the immensely rich merchant-prince and benefactor of Daenerys and Viserys Targaryen. He arranged the marriage between Dany and Khal Drogo, and gave her the three dragon eggs as a wedding present. Illyrio was also a close friend of Varys, the Master of Whispers who served on the Small Council. The two conspired together, seemingly pushing for a civil war between the Lannisters and the Starks.

However, Illyrio vanished after that and was only referenced a couple more times in later seasons. Why David Benioff and D.B. Weiss didn’t bring him back remains unclear considering the significant role he played alongside Varys. Illyrio is much more crucial to the plot in Martin’s books and it’s possible The Winds of Winter will finally reveal the truth behind their conspiracy.

Illyrio and Varys were childhood friends who rose from rags to riches, becoming influential men with royals in their pockets and a sprawling network of informants. Varys left Pentos for King’s Landing to advise Aerys II Targaryen; Illyrio stayed behind, offering his protection to Viserys and Daenerys Targaryen from afar before becoming their benefactor. He expects to be paid his due once the Targaryens have reclaimed the throne. )

Eddard: Tell me, Lord Varys, who do you truly serve?

Varys: Why, the realm, my good lord, how ever could you doubt that? I swear it by my lost manhood. I serve the realm, and the realm needs peace. — A Game of Thrones

In the books, Varys convinces Jon Connington to leave the Golden Company, a powerful group of mercenaries-for-hire, and fake his own death. Connington, who’s also loyal to House Targaryen, takes on the identity of Griff. That’s right, Jon/Griff is the “father” of Young Griff, whom many Westerosi speculate to be the true Prince Aegon Targaryen. However, most ASOIAF readers believe he isn’t the real Aegon at all.

Martin's first book sets up the pair’s converging storylines, implying that Varys and Illyrio have a larger goal in mind by restoring the Targaryens to power. However, Varys also has a hand in escalating the tensions between the Lannisters and Starks, offering seeds of information to Ned Stark about Cersei and Jaime's relationships, as well as King Robert Baratheon’s death.

Illyrio and Varys’ conspiracy has been the subject of speculation among ASOIAF readers for years. Why would they benefit from placing a Targaryen on the Iron Throne? There’s also the fact that book Varys is clearly rooting for “Aegon” to be crowned king, while Illyrio is propping Daenerys as the rightful heir. Why would the friends be on opposing sides if they shared the same vision?

Perhaps Varys planted Aegon to eventually thwart Daenerys’ claims to the Iron Throne. As the master of whispers, however, he also has the power to spread rumors about Young Griff’s legitimacy as Aegon. Perhaps that will reaffirm Daenerys’ status as a true Targaryen, with her dragons and much more as evidence.

Conversely, Illyrio may have felt the dynasty needed more surviving Targaryens than Daenerys in order to be secure. In A Dance with Dragons, he says, “The dragon has three heads, there is no need for haste.” It’s possible that this is why he asked Varys to bide his time in A Game of Thrones.

Martin's novels have yet to reveal Aegon’s true identity, and it's possible Dany's story could play out differently in the books. Varys indicated that he wanted peace for the realm, and it’s possible bringing the Targaryens back to Westeros is what peace means to him. It’s hard to say considering how Varys aided in the fall of Aerys II, but it’s possible he and Illyrio are working for their own benefit and not the true good of the people.

Whatever the case may be, it’s up to The Winds of Winter to provide answers regarding Varys and Illyrio’s conspiracy. They’ve been plotting for years and it’s about time that their plans are laid out in plain sight (at least to readers). Game of Thrones never brought Illyrio back either, leaving fans to wonder what happened to him and why Varys was left to his own devices after Season 1. Martin’s sixth book can offer closure regarding Illyrio’s fate and put the speculation of their schemes to rest for good.