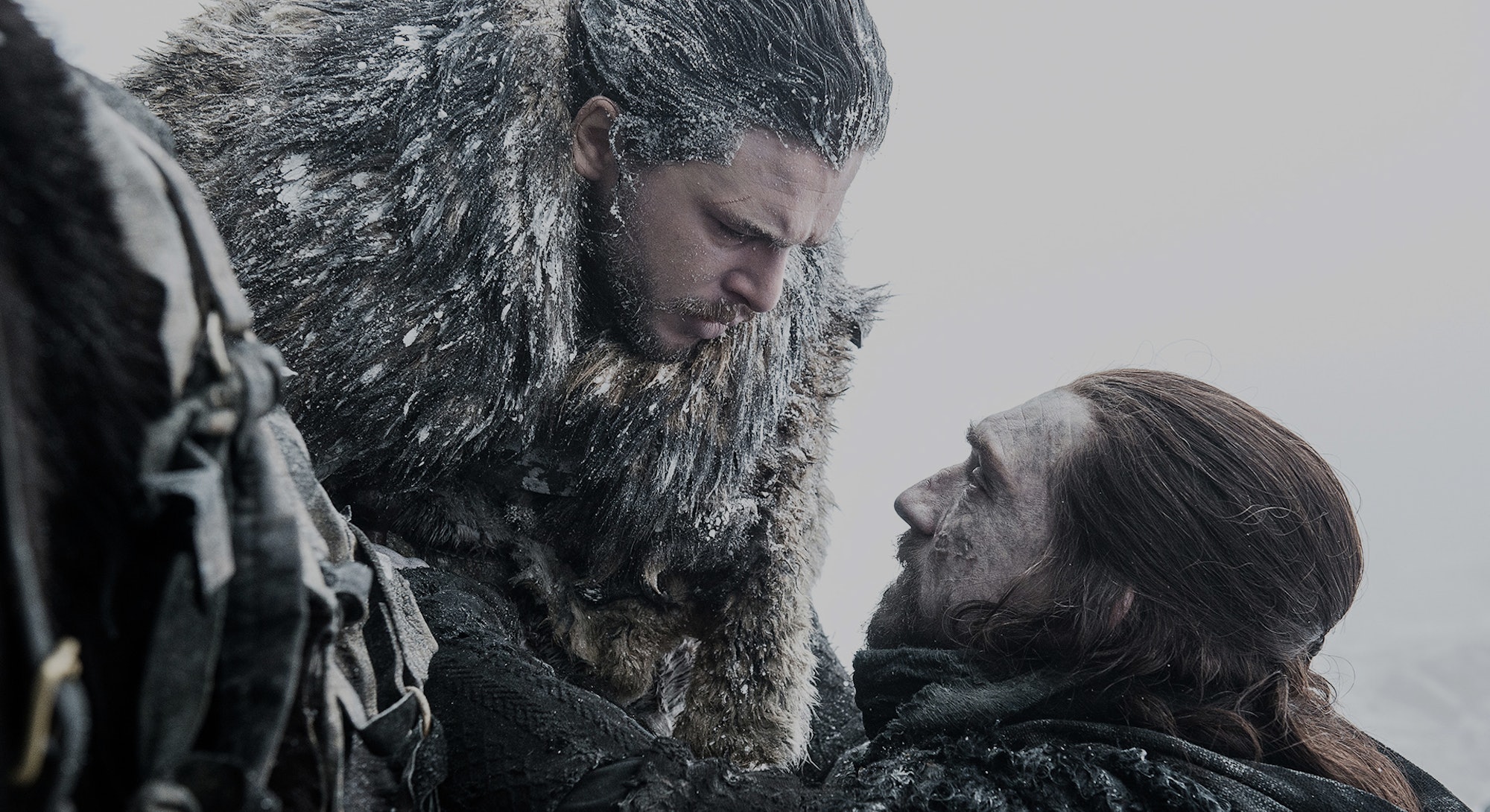 Way back in 1996, A Game of Thrones debuted to minimal fanfare and introduced three great mysteries that set into action everything that came after:

The first plot hatched into dragons, the second into the War of the Five Kings, ut, twenty-four years later, we still don’t know what happened to Benjen, Ned’s younger brother and the First Ranger of the Night’s Watch. And the one theory that seemed to explain it all, that Benjen died and became the otherworldly figure known as Coldhands, has been explicitly debunked by George R. R. Martin himself. That leaves Benjen’s fate as the single biggest mystery to be revealed on the Winds of Winter release date (which probably won’t happen for a good long while at GRRM’s current pace).

Not Without My Cold Hands

In case you haven’t read A Game of Thrones since 1996 (you poor soul, still waiting for Winds of Winter after all these years!), Benjen Stark was quite prominent early in the book. He briefly served as a guide and mentor to Jon Snow when he first joined the Night’s Watch, but he soon disappears beyond the Wall and hasn’t been definitively seen since.

The first appearance of Coldhands in A Storm of Swords gave us Stark stans some hope. Lost in the wilds beyond the Wall, both Sam Tarly and Bran Stark separately received help from a rather sprightly dead man dressed in Night’s Watch garb and armor and riding an elk (must be nice). For many years, fans associated this figure with Benjen. It actually seemed pretty clear cut: Coldhands was obviously a dead Night’s Watch ranger, one who hadn’t been turned by the wights but revived by someone much less evil (probably the three-eyed crow). He helped a Stark and his Night’s Watch brother, and showed great bravery and skill in the wild.

The only prominent and missing Night’s Watch ranger in recent times is Benjen. So it seemed like a suitable payoff for one of the series’ very first dangling questions.

But Benjen isn’t Coldhands. Although the theory seems logically consistent, it’s basically the only Winds of Winter theory that has been definitively debunked. And that’s because George R. R. Martin himself said so in a private note to his own editor, where he would have no reason to be hand-wavey and mysterious.

Here’s how we know for sure that Benjen Stark won’t be revealed to be Coldhands in Winds of Winter. Back in 2015, a truly devoted fan went to the Cushing Library at Texas A&M University, which maintains a large collection of George R. R. Martin’s notes, manuscripts, and papers. The fan gained access to an original manuscript for A Dance with Dragons and found out lots of interesting things, but the most notable discovery was a note from GRRM’s editor on a page about Coldhands, asking him whether the character was actually Benjen. George responded with a big, red “No.” See for yourself.

Remember the context: this is a private exchange with his editor that he never thought would be public. He had no reason to lie. Don’t worry, plenty of people have come up with convoluted explanations about how George is just trying to trick us, so if you really need something to hold onto, it’s there. But for the rest of us, this is proof that the Coldhands = Benjen theory is just wrong.

The Real Coldhands Were The Friends We Made Along The Way

That leads to a hard question and an easy one.

First the easy one: who or what is Coldhands? Other theories have emerged over the years, including that he is Bloodraven, the lost Targaryen bastard who is probably also the three-eyed crow, or one of the Raven’s Teeth (Bloodraven’s long-dead loyal bodyguards). Or maybe he’s Jon Snow’s old wildling friend Quorin Halfhand, an ex-ranger whom Jon had to kill to keep palling around with Mance Rayder. Or perhaps he is the Night's King or the Last Hero or other legendary figures who died thousands of years ago. But none of these theories are all that convincing.

The likeliest explanation is the simplest: Coldhands isn’t anybody in particular. He doesn’t have a secret identity. After all, isn’t a dead-but-not-dead ranger riding an elk and saving the heroes in the very nick of time pretty dramatic already?

When Leaf, child of the forest extraordinaire, confirms that Coldhands is dead, she says “They killed him long ago.” Statements like that, and the overall vibe of the Coldhands chapters, evoke older and more mythic stories: Celtic legends rather than King’s Landing politics. In that lens, all we need to know is that Coldhands was once a ranger of the Night’s Watch, and though he is dead, his watch has not ended.

The Fate of Benjen “Warmhands” Stark

Now for the hard question: What actually happened to Benjen? Unlike Coldhands, we can reasonably expect to get a real answer here someday — assuming George ever finishes Winds of Winter. That’s because of a very basic literary trope called Chekhov’s Gun, which basically says that if a writer establishes an object, character, or plotline as important, they have to make that storyline pay off. If a cabin has a gun on the wall and the writer keeps conspicuously mentioning it, someone is going to get shot before the story is over.

The mysteriously missing brother of the series’s original protagonist is a locked and loaded Chekhov’s gun. And it’s not like the Benjen plot went away: the Great Ranging of the Night’s Watch, Jon’s arc in A Clash of Kings, was launched explicitly to find him. And they didn’t!

The Benjen mystery isn’t some side affair. It is at the very heart of what has been going on in the North since the series began and the Others reappeared. That’s why the most common fan theory — that Benjen randomly died somewhere beyond the Wall — is both incredibly unsatisfying and unlikely to be true. It’s just bad storytelling, and George R. R. Martin is not a bad storyteller.

The only real clue about what happened to Benjen comes at the foot of the Fist of the First Men, where Jon discovers a cache of dragonglass (and a mysterious horn) wrapped in a Night’s Watch cloak. The garment had clearly not been there long; it’s described as "Good wool, thick, a double weave, damp but not rotted. It could not have been long in the ground." It was likely left by Benjen, or a ranger with him.

This adds to the theory that he was en route to the Land of Always Winter, on some strange quest to find where the Others are coming from, but that’s just speculation. For some reason, for this giant mystery, GRRM has played his cards very close to his vest. There’s only one way we’ll ever really know: when he finishes Winds of Winter, which may actually be in sight!

Luckily, those of us who always thought Benjen was Coldhands have been granted one small morsel. Even though the theory has been explicitly disavowed, Game of Thrones decided to riff on it anyway.

In Game of Thrones Season 6, Benjen Stark does show up again, first to help Bran and again in Season 7 to save Jon Snow. The show doesn’t call him Coldhands, but he’s clearly in a similar situation in that he’s dead. Watch for yourself.

Benjen led a ranging party deep into the north (see the theory above), was killed by White Walkers, and was saved by the children of the forest using dragonglass — not from dying but becoming a wight. That’s why he can’t pass south of the Wall, since it doesn’t allow the walking dead to pass.

If that’s the closest we ever get to Coldhands being Benjen Stark, so be it, even if Game of Thrones failed to show him riding an elk.