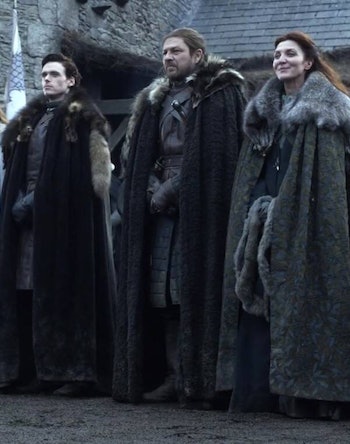 It’s been over nine years since George R.R. Martin published a book in A Song of Ice and Fire series.

Readers have been patiently waiting for the release of The Winds of Winter ever since. Martin has made some progress on the novel since releasing a handful of sample chapters from a few years ago. This year’s pandemic has seemingly sped up his writing process, with the need for social distancing sending him off to a cabin to (hopefully) finish the novel.

In recent weeks, he’s suggested The Winds of Winter draft will be submitted by some point next year. Martin also hinted that he’s been spending a lot of time writing handful of characters, including the “girl with no name, over there in Braavos,” otherwise known as Arya Stark.

Martin’s choice to leave out Arya’s name in his post hints at Arya’s evolution as a member of the Faceless Men. She’s been training to kill without question, essentially becoming a child soldier heeding Jaqen H’ghar’s orders to serve a higher purpose. Will she carry on this path of murder and mayhem or will she head back to Winterfell, like her HBO counterpart?

In Game of Thrones, Arya uses the skills she learned with the secret society of assassins to kill Walder Frey. After returning to her family, Arya kills the Night King during the Battle of Winterfell and is last seen sailing away from Westeros to seek out new adventures.

However, the HBO series never truly diverts from her path as a killer, even after she’s spent time with the Faceless Men. Arya’s entire arc has been shaped by gruesome murder plots and death. The Winds of Winter has the opportunity to course-correct and develop Arya beyond her vengeful past.

Arya’s journey has been all about self-discovery. Sansa was being primed for marriage to Joffrey Baratheon and enjoyed the status that came with being a noblewoman. Arya, on the other hand, wasn’t too keen on marriage or societal traditions and constantly spoke her mind no matter the occasion.

“Forbid her anything and it became her heart's desire. She had Ned's long face, and brown hair that always looked as though a bird had been nesting in it. I despaired of ever making a lady of her. She collected scabs as other girls collected dolls, and would say anything that came into her head.” — Catelyn Stark

It was apparent very early on that Arya would rather learn how to fight and explore than deal with the politics of her family’s station. Her relationship with Sansa was often tempestuous as a result.

Everything changed after Arya and Sansa accompanied their father, Lord Eddard (Ned) Stark, to King’s Landing. Arya witnessed his death, and from that tragedy was born her thirst for revenge. However, over the course of her journey, Arya began to lose parts of her identity.

She even went so far as to kill people who weren’t on her hit list, including Dareon, a singer and deserter of the Night’s Watch. Arya sought vengeance, but joining the Faceless Men pushed her to shed her identity — an identity that was currently being co-opted by Sansa’s friend Jeyne Poole to trick Ramsay Bolton into thinking he’d married the real Arya.

With many believing her to be dead, Arya was free to be whomever she wanted to be, but she was also very lost because of that lost connection to her past life. It's perhaps why her becoming an assassin is the bottom of the barrel for her as it exemplifies her lack of untethering from who she used to be.

That said, her joining the Faceless Men doesn't bode well for her character, but there's still time to change the course of her trajectory. It’s possible that Arya’s time with the Faceless Men will make her realize that the life of an assassin isn’t for her. After all, Arya has been operating as a lone wolf for several years, initially believing most of her family to be dead. She’d also come to believe that her father was wrong, it’s the lone wolf that lives and not the pack. Perhaps The Winds of Winter will help her to realize that the Faceless Men are not her pack, but merely a speed bump on the way back to her family and true identity as a Stark.

“A long time ago, she remembered her father saying that when the cold wind blows the lone wolf dies but the pack survives. He had it all backwards. Arya, the lone wolf, still lived, but the wolves of the pack had been taken and slain and skinned.” — Arya

Arya is still in Braavos, having been assigned an apprenticeship at a playhouse to carry on training with the Faceless Men. However, The Winds of Winter might get her to finally break free of them and forge her own path. Hopefully, one that isn't stained with blood and fueled by rage.

At this point in time, Arya has seemingly lost her identity completely in an attempt to become "no one." Her storyline has been shaped by being away from her family and plotting her next kill. It's possible that, instead of heading to kill Frey, Arya will abandon assassinations in favor of defending those who need it, perhaps using her formidable fighting skills to defend the next leader of the North, or the Seven Kingdoms.

It might not be on brand for her to join in on the politics of the kingdom, but it's better than being on an aimless path as no one. Perhaps Arya will discover where she truly belongs in The Winds of Winter. Being a nameless assassin should not be her path forever.