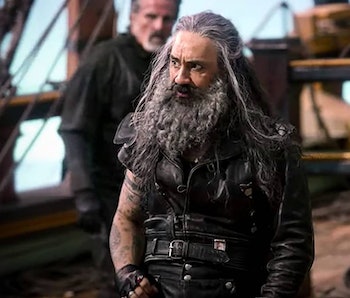 Our Flag Means Death is the biggest sleeper hit of 2022. The HBO Max series, created by David Jenkins and starring Kiwi icons Rhys Darby and Taika Waititi, has caused a fan sensation with its quick wit, over-the-top characters, and of course, the touching love story between its two protagonists. Now, fans are clamoring for another season after burning through Season 1’s 10 episodes.

Here’s everything you need to know about the show’s future, from a potential renewal to what could happen next for Stede Bonnet.

Is Our Flag Means Death renewed for Season 2?

As of writing, Our Flag Means Death is not yet renewed for Season 2 by HBO Max. But considering the massive fan response, including countless fanart, it seems like it is only a matter of time. Even the show's creator, David Jenkins, tweeted in disbelief that the show wasn’t renewed yet.

So while we might not have anything to report right now, not renewing Our Flag Means Death seems like a huge missed opportunity on HBO Max’s part.

When will Our Flag Means Death Season 2 arrive on HBO Max?

Because Our Flag Means Death has not been renewed for a second season (yet), it does not have a premiere date. If Season 2 is greenlit, then we’ll have to wait until writing and production are underway before we can be on the lookout for official release information.

However, we should take note of Season 1’s production timeline. The show received a series order from HBO Max in September 2020 and began casting in early 2021. It finally began production in June 2021 and wrapped filming near the end of September 2021. Our Flag Means Death debuted less than five months later, on March 3, 2022. If the streaming platform renews the series relatively soon, we could expect Season 2 to premiere sometime in mid-2023.

Is there a trailer for Our Flag Means Death Season 2?

Unfortunately there’s no sign of a trailer, as the writers are in a holding pattern until a renewal announcement comes through. In the meantime, you can rewatch the first season’s trailer below.

What will happen in Our Flag Means Death Season 2?

Based on what happened in Season 1, we’ll likely see the inevitable rescue of Stede and his crew from the desert island where they were stranded in the finale and then the reckoning between Ed and Stede about their blossoming romance.

Other than that, there’s no real sign of what possibly could happen next in Our Flag Means Death. According to David Jenkins, there’s not a lot of historical research done behind the scenes. So looking at the real story of Stede Bonnet doesn’t result in many ideas. In real life, he was executed in Charleston, South Carolina - kind of a bummer ending.

But there’s still a lot we have left to see in a possible Season 2, including the backstories of crew members and multiple fledgling romances that could develop into something more. There is a lot of potential for this pirate comedy, and the writing team is more than up to the challenge. Hopefully, they’ll get the green light soon and be able to finally sail off toward the next chapter.