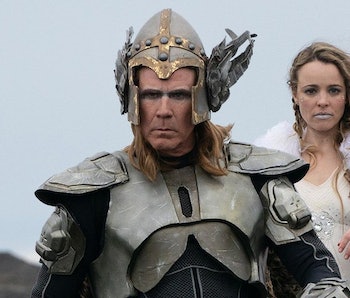 Netflix original movies are never afraid to get a little weird. From orc cops to killer art, Netflix takes advantage of its streaming audience to keep pushing the envelope. That tendency may have peaked with the release of Eurovision Song Contest: The Story of Fire Saga, which combines the classic comedy of Will Ferrell with the utter absurdity of the Eurovision Song Contest.

For the uninitiated, the Eurovision Song Contest is an annual broadcast where around 40 countries write and perform an original song, then vote for the winner. The prize? Hosting the contest next year. Unlike most American music shows, it's not a singing contest, it's a song contest, so all aspects are considered, including some truly outlandish – and memorable – performance gimmicks. The Netflix film incorporated eight of these "Only At Eurovision" moments into the script, because you really couldn't make them up.

Eurovision is over 50 years old, so it took a while to find its footing. How do you make a song that appeals to multiple countries who all speak different languages? For a while, the best answer was nonsense syllables. So when Lars and Sigrit get harangued with requests for "Ja Ja Ding-Dong" at their local bar, they're referring to these early songs, like 1969 winner, the UK's "Boom Bang A Bang."

One of the entries for the Iceland Song Contest is a "21st Century Viking," a Nordic man with flowing locks that fly about in the air as he sings. This is a reference to Denmark's truly bonkers and extremely Danish 2018 entry, "Higher Ground." Five men, each with longer hair than the last, sing a rousing battle anthem while getting blasted in the face with a wind machine and mist. There's also a poignant flag-waving moment, in case it wasn't epic enough.

Demi Lovato's role as Icelandic diva Katiana is quite literally short-lived, but her powerhouse performance, again with a wind machine and a long, flowing green dress, is indicative of Sweden's 2012 champion song "Euphoria." Eagle-eyed viewers will be able to spot singer Loreen in the "Song-Along" montage of the movie, along with pretty much every Eurovision icon of the last 10 years.

Usually, Eurovision entries do well because of how weird they are: maybe it's a diva with a beard, like Conchita Wurst, or an epic sax solo that still lives on as a meme, like SunStroke Project. In 2017, Portugal threw out the entire rulebook and nominated jazz singer Salvador Sobral to sing haunting ballad "Amar Pelos Dois." It was so normal it was weird, and won the contest. Recognize it? It's the song that plays when Lars and Sigrit arrive in Edinburgh, and Sobral makes a cameo as the street performer singing it.

Dan Stevens's performance as Russian operatic pop star Alexander Lemtov may seem over the top, but it's nowhere close to Romania's dubstep soprano rock god Cezar, who hit ear-splitting tones in 2013. The scene in Eurovision: the Story of Fire Saga is significantly less theatrical, but the influence is definitely there. You know Eurovision's ridiculous when a character has to be toned down and still looks like Jonathan Rhys-Myers in Velvet Goldmine.

Duets are a mainstay of the Eurovision discography, so it makes sense the protagonists of the Netflix movie would be a duo. However, when it comes to Eurovision duets that, like Fire Saga, are famously bad, there's only one name that springs to mind: Jemini. The UK's 2003 entry "Crybaby" was so off key, it became the first English language song to not score a single point in the voting. It's a shame: like Fire Saga's "Double Trouble," it's a legitimately catchy song that just lost out on execution.

In Eurovision Song Contest: The Story of Fire Saga, Belarus's entry appears to be some sort of demon viking band performing under the name Moon Fang. Sound over-the-top? Meet Finnish hard rock group Lordi, who performed "Hard Rock Hallelujah" at the 2006 contest in full head-to-toe creature makeup. With a gimmick like that, they were sure to fall flat. Except they didn't, they won. Just goes to show how far a fun performance can get you.

For their semi-final performance, Lars surprises Sigrit by ascending from the heavens in a human hamster wheel. The inevitable conclusion of this leads to national embarrassment and a rift between the members of Fire Saga, but the idea didn't come from thin air. The prospect of a hamster wheel as set-piece is straight out of Ukraine's 2014 entry, where the singer is completely upstage by a man doing flips and tricks in an oversized rodent treadmill.

Eurovision Song Contest: The Story of Fire Saga is streaming now on Netflix.