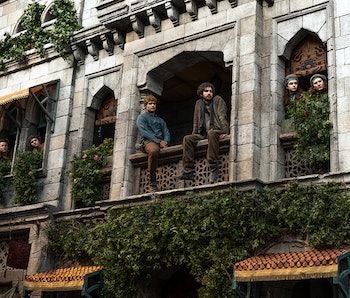 What is magic without the words to cast the spell? As with most fantasy, The Wheel of Time uses several terms and phrases without giving the audience much leeway on what everyone means. While the first few episodes lean heavily on exposition, the Amazon fantasy series is all the better for trusting the audience to be intelligent enough to keep up with every new character and magical facet of this story.

That said, for those looking for a starter kit on the terms and phrases of The Wheel of Time, here is a brief guide of what you should know better to grasp all the nitty-gritty details of the first season.

According to prophecy and legend, the Dragon Reborn is someone who will be born again at humankind's greatest hour of need to save the world. This chosen one is essentially the catalyst of the series’ events. However, with that power comes the potential for the Dragon to cause the next breaking of the world.

False Dragons are men who claim they are the Dragon Reborn. While still dangerous and capable of carrying a formidable number of followers, many can’t wield the One Power, and those who try are captured or murdered.

An enormous element of the book and show, the Aes Sedai are wielders of the One Power. In the story’s modern-day setting, all the wielders are women. The people of this world widely distrust The Aes Sedai and fear them due to how they meddle in the lives of others. The first episode demonstrates this with Moiraine’s appearance in the Two Rivers and the town's begrudging acceptance of her presence.

The One Power is drawn from the True Source (the driving force of the universe), and it is what the Aes Sedai use to wield their power.

Saidar and saidin each make up one-half of the True Source. Saidar is the female half, while Saidin is the male half, which has been tainted by the Dark One’s touch, driving any man who wields it mad.

Darkfriends are those who follow the Dark One. Trollocs and Fades, who we see attacking our main characters in the first episodes, are Shadowspawn and were created by the Dark One. Unlike the Trollocs, Fades take on more human characteristics.

Ta’veren is a term mentioned in passing but is crucial to the overlying arc of the story. To be ta’veren means to be a person whom the Wheel of Time “weaves all surrounding life-threads.” Ta’veren pull on others' destinies and alter the timelines around them due to their influence on the given Age. It’s why the show’s main characters are chosen as they are all believed to be those to which the world will mold itself around.

The Wheel of Time

Despite being the show’s namesake, much of The Wheel of Time’s meaning is given in fits and bursts throughout the show thus far. But more than anything else, it is essentially how the narrative describes the passage of time.

As Moiraine narrates in the first episode, “The Wheel of Time turns, and Ages come to pass leaving memories that become a legend. Legend fades to myth, and even myth is long forgotten when the Age that gave birth to it comes again.”

The Wheel of Time releases new episodes every Friday on Amazon Prime Video.