'What If?' head of character design on creating T’Challa Star-Lord

“There was too much fun to be had” 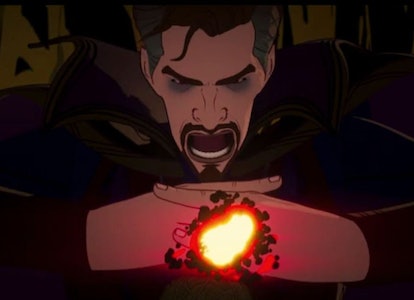 It’s easy to forget the origin of the MCU was bringing comic book characters to life. More than a decade in, the Avengers feel like they’ve always been flesh and blood. At least until the release of What If...?, which brought Earth’s mightiest heroes back to the drawing board — literally.

This poses a unique opportunity for Ryan Meinerding, the Head of Visual Development and Character Design. Somehow, he needed to guide these characters not from the comics to cartoons but from the live-action to animation. Thankfully, he’s the perfect person for the job.

Meinerding began as a conceptual artist for Marvel Studios before moving into the art and design department. He was behind the creation of many iconic looks and characters. In a way, What If...? provided a nostalgia trip. In one instance, this was heartbreaking.

What If...? contains the last performances of Chadwick Boseman as T’Challa the Black Panther before his tragic death, and it wasn’t something Meinerding took lightly.

“I was lucky enough to design one of the Black Panther costumes for Civil War,” Meinerding tells Inverse. Meinerding designed Boseman’s first and last MCU appearances, bookending a truly unforgettable part of the franchise.

Seeing T’Challa as Star-Lord in Episode 2 of What If...? may not have shown T’Challa as we grew to love him but highlighted what a wholesome presence he is. He even got Thanos to redeem himself.

“Working with the storyline that they were providing that was just able to show T'Challa in such an amazing light coupled with Chadwick being gone was a huge honor,” Meinerding says. “I'm really fortunate to have been able to work on that project. I'm glad that people seem to really like the episode because it's one of my favorites.”

Meinerding spoke with Inverse about the look of What If...?, from its inspiration in century-old illustration to creating a zombie version of Captain America.

Is it easier or more difficult creating characters based on real people?

It depends on the situation. If you're trying to create something from scratch, the notion of exploring and having blue sky parameters where you can do anything can be daunting and inspiring at the same time. What we're trying to do with this series is really have it be inspired very directly with the MCU films and seeing a very direct What If...? scenario that breaks off from the main timeline.

In all honesty, it might be a little bit easier simply because the design parameters are so clear. We want it to still resemble things in the MCU, but with this one thing that's different and then being able to explore that one thing. I wouldn't say that any of it's particularly easy, but having those parameters be so clear? That's the fun of my job in general.

What if Dr. Strange was evil? We have Dr. Strange to start from, and then we have the style of the show. We get to go down that fun road and bounce those visuals off of what people already know about a character from the MCU.

That's the thing I kept seeing as I watched the episodes. It's a way to have a second chance at these kinds of characters and these rules.

It's also fun for the idea of seeing alternate versions of things that allow people to still be with characters that they love. The idea of seeing an alternate take, seeing how something could have changed, seeing what that means for that character almost gives you a more well-rounded understanding of the character, even in the main timeline.

How do you strike the balance between stylized and recognizable?

It's a little bit of a challenge. We were really looking at American illustrators from the 1940s as a hallmark of the style of the show. Illustrators like J.C. Leyendecker and Tom Lavelle, and Mead Schaeffer all painted pretty realistically but did certain things that tweak the realism. So we were looking to look at those styles that maybe do what we're wanting to, but they're more than we can achieve in animation, and so we simplify them. It was basically trying to get the spirit of each character to be put through that filter and hopefully come out as something that is as iconic as how they appear in the actual MCU.

Are there any upcoming characters that you're excited to see the fan reaction to?

With the Dr. Strange episode, I'm super excited about where he ends up at the end of his journey. It's something that's really, really interesting. And I hope the fans are really, really digging it.

Were future live-action adaptations ever a concern in developing these characters?

There are so many people like Brad Winderbaum and Kevin Feige who are watching whatever is going on. They have a better gauge of what's coming up and knowing where we can go without treading on other territories. It's always probably a concern of theirs.

From our point of view, this series just provided so many limitless possibilities. The stories they were bringing in and the idea of taking these characters that hopefully people love and doing something very unique and specific... For me, it never felt like we were bouncing up against anything. It just always felt like there was too much, too many places we could go, too much fun to be had.

I've seen the teaser; I know that zombies are coming up. What was it like coming up with those characters?

I've worked on a lot of looks for Captain America, and this has to be one of the most fun ones I've got to do. Zombie stuff, in general, is fun to watch. I think I always go back to things that were animated that were sort of spookier. The characters were supposed to be sort of scary, but not necessarily. That sort of inspiration from when I was a kid was there when I was working on trying to develop the look of the zombies.

I think the fun of it is seeing Captain America's helmet that looks pretty much right, but then there's the shrunken, shriveled face inside of it. Being able to play with the icons in that way was a lot of fun. It was interesting to be able to design a character like zombie Cap.

You mentioned influences in animation. Does anything specific come to mind?

I've always loved animation in general. My first entrance into the Marvel characters would have been through Spider-Man and his Amazing Friends and watching into the ‘90s Spider-Man. The idea of being able to work on the MCU versions of things and translate them was hugely inspiring to me, and it almost made me overly eager to insert myself working on this project.

But I would say for me, the animation really came out of a desire to have a lot of quality and a cinematic feel and to push the characters in a direction that felt a little bit flatter and slightly more or less tentative than a lot of stuff that's going on today in animation.

And I think that all came through that Leyendecker lens of "How do we stylize and idealize the characters? How do we make them feel like monumental figures?" I think that's one of the fun things about Marvel heroes. You can kind of think of them as monumental sculptures that have idealized proportions.