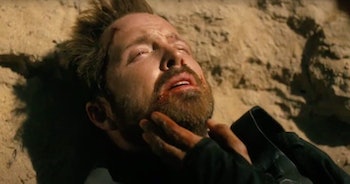 It’s impossible to prove that Westworld creators Lisa Joy and Jonathan Nolan are Doctor Who fans. That said, because the HBO version of Westworld began in 2016, at least a few people making the sci-fi robot drama have definitely peeked inside the TARDIS once or twice. With Episode 6 of Season 4 — "Fidelity" — Westworld has seemingly borrowed a massive plot twist from one of the best Doctor Who episodes ever made, and it’s just as awesome here as it was when it happened to Peter Capaldi. Maybe better. Spoilers ahead.

Although Aaron Paul’s Caleb was only added to Westworld in Season 3, it’s kind of hard to imagine the show without him. As the human ally of Dolores (Evan Rachel Wood) in Season 3, Paul brought his down-to-Earth style to this twisted cyberpunk future and infused Westworld with much-needed humanity. Now, in Season 4, Caleb’s struggle is even more interesting. Just as William (Ed Harris) has a Host doppelgänger in Season 4, in Episode 6, we spend a lot of time with Caleb’s Host duplicate, who is seemingly imprisoned by Charlotte Hale (Tessa Thompson) in the time period after the mid-season time-jump.

Actually, as the episode goes on, it turns out we’re spending time with multiple versions of Caleb, each reborn in a new Host body, as Charlotte tries to test just how far an artificial version of Caleb will go to contact his daughter. The idea that a human’s consciousness could be fully transferred into a series of Host bodies was first explored by Westworld in the excellent Season 2 episode “The Riddle of the Sphinx,” in which we saw William test out several robot copies of James Delos (Peter Mullan) over the course of several decades. But, the way in which Caleb learns that countless versions of himself have attempted this escape before is where we get into some serious Doctor Who action.

In the penultimate episode of Doctor Who Season 9, “Heaven Sent,” the Doctor (Peter Capaldi) is trapped in an endless maze inside of a castle on an alien planet. In the episode, Peter Capaldi is pretty much the only character and slowly begins to realize that he’s been trapped for thousands of years, and his body has been reassembled by a teleporter, in order to eventually get to the end of the maze. Just like Caleb, the Doctor slowly learns “there were never any other prisoners,” and just like Caleb, the Doctor is burned to death nearly every single time his cycle resets, and a new body is created.

Dead or dying versions of the Doctor also leave him clues, just like deceased or almost-dead versions of Caleb do in Westworld. What happens to Caleb is more gruesome of course, including a gut-wrenching moment when he uses the body of one of his dying selves to cushion his fall. Then again, the imagery of one identical body getting burned, while another version of the same person lives, is exactly what happens to the Doctor in “Heaven Sent.” In that episode, the Doctor even wonders how long he can keep going, “burning the old me to make a new one?”

The opening credits of Westworld Season 4, previously shrouded in mystery, are also now overtly literal. What we’re seeing is all the copies of Caleb, trapped in their cells, each getting burned by Charlotte — except, of course, the ones who escape. It’s a chilling image that seems to shatter any notion of individuality or free will, two things Westworld loves to question. In the Doctor Who version of this trope, the Doctor’s motivations were all about avenging the death of Clara, and (eventually) getting back at the Time Lords for trapping him in the first place. But, in Westworld, Caleb’s motivations are a little more personal, and perhaps, more fulfilling long-term. He wants to give his daughter hope.

Even though we learn Charlotte has been testing him the entire time, Caleb does get a message out to his daughter in a critical moment, giving her enough hope to keep fighting. Also, because Frankie/C (Aurora Perrineau) has now teamed up with a reborn version of Maeve (Thandiwe Newton), he was arguably more successful in this quest than the Doctor ever was in Doctor Who.

It’s tempting to call this kind of re-do episode a Groundhog Day situation, but because real-time copies of the same person are being used over and over again, and it’s not a time loop and not a simulation, the stakes are much, much higher. In 2015, Doctor Who basically peaked with this twist, and now, Westworld has done the same. The only question now, with two episodes left in Season 4, can Westworld end on a high note? Or is this the last, and coolest, twist for a long long time?

Westworld Season 4 has two episodes left, each that airs on Sundays on HBO. The season finale drops on August 14, 2022.