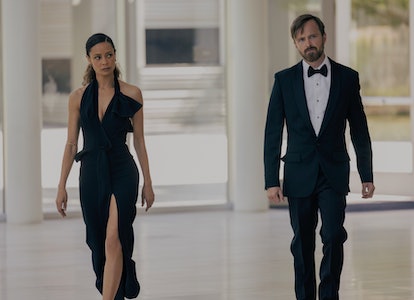 Westworld just got the Great Gatsby treatment. And although, tragically, nobody calls anybody else “Old Sport” in the new Roaring Twenties World, one key speech from a Host version of the Man in Black does shed some light on the mysterious Westworld timeline. Here’s how the events of Episode 2 and Episode 3 of Westworld Season 4 confirm one timeline twist and may set up another.

Spoilers ahead for Westworld Season 4, through Episode 3.

Westworld Season 4: What year are we in?

Not counting the Jimmi Simpson William flashbacks set in the 2020s (part of Season 1), the vast majority of the “present” of Westworld Seasons 1-3 happens from 2052 to 2053. Really! Yes, there are a lot of crisscrossing flashbacks and flash-forwards throughout the first three seasons the events that move the story forward, so far, happen over a period of about two years.

Season 4 starts seven years after the finale of Season 3, which, believe it or not, is one of Westworld’s biggest present-tense time jumps, at least in terms of linear character stories. So that means all the action with Maeve (Thandiwe Newton) and Caleb (Aaron Paul) discovering the new Roaring Twenties version of “Westworld” actually takes place in 2060.

That said, in Episode 2, just before Maeve and Caleb realize they’re on their way to a rebooted Jazz Age version of Westworld, the host doppelgänger version of the Man in Black alluded to WWI having occurred “150 years ago,” and after that moment, America came “roaring back.” WWI ended in 1918, so if you add exactly 150 years, you will get 2068, which would be closer to 160 years, not 150. Maybe the Host-William was rounding down?

If not, then it’s possible even more time has passed between the “present” of season 3 and the “present” of season 4. If we’re actually closer to 2068, and not 2060, that could indicate more time passed in Season 3 than we previously knew, or that for whatever reasons, Westworld isn’t being entirely honest with us in terms of how much time has actually passed for Caleb and Maeve. (Westworld has never lied about fake timelines before, right?)

So Maeve and Caleb are hanging out somewhere between 2060 and 2068. (Probably.) But how does this help us understand the timelines of Bernard and Christina? Assuming Christina —the mysterious faux-Dolores character played by Evan Rachel Wood this season — isn’t living in The Matrix, it’s possible she exists in another kind of Westworld time-jump.

Ditto for Bernard (Jeffrey Wright), who, along with Stubbs (Luke Hemsworth), has not interacted with anyone from in “real life” after returning from the virtual “ Valley Beyond.” Are Bernard, Stubbs, and Christina slightly further in the future than Caleb and Maeve? Because the Man in Black mentioned that nebulous “150 years,” post-WWI, it feels possible the timeline we assumed was happening, is in fact, very different.

So if a future episode of Westworld Season 4 reveals we’re actually closer to 2068 (or even further along) don’t say we didn't warn you.