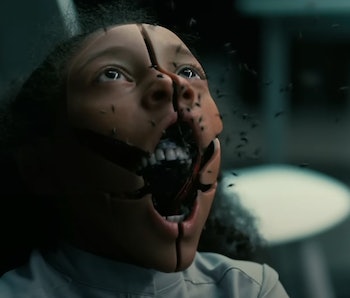 After a lackluster and frankly uninspiring Season 3 of Westworld, we were just about ready to pull the plug on the damn thing. Not even the addition of Aaron Paul could save the provocative HBO sci-fi thriller from the blah dialogue and dreary cityscapes it opted for instead of the mind-blowing mysteries or majestic visuals that made it such enthralling prestige television.

But readers, we’re excited to announce that Westworld has not only come back, it’s made a comeback. Season 4 is a promising return to the dystopic, adults-only Magic Kingdom, greatly improving upon its last installment. With the help of a new showrunner and some old tricks, Westworld manages to correct course, channeling the elements that made it a surefire hit in 2016.

Co-creators Lisa Joy and Jonathan Nolan seemingly listened to critics and fans who found Season 3’s pivot beyond the confines of Westworld’s theme park to be a muddling bore. Yep, light spoiler here since the official Westworld trailer gives it away, but we’re actually going back to — and below — the screwed-up robot theme park land that started it all.

Viewers will also be reunited with Maeve (Thandiwe Newton), the Man in Black (Ed Harris), Bernard (Jeffrey Wright), “Charlores” (Tessa Thompson), Clementine (Angela Sarafyan), Caleb (Aaron Paul), and Ashley (Luke Hemsworth). You’ll likely struggle to remember who’s good, who’s evil, and who is a host with someone else’s brain implanted in their body. Our advice: don’t worry about it and just let the story play out.

Most seemingly changed, however, is Evan Rachel Wood, who now plays the role of a video game writer Christina. James Marsden also returns in a mysterious new role. Based on the four episodes provided for review, we have no idea what either character is up to in Season 4.

Westworld’s cast is as talented as ever, and thankfully they have more to do this time around. Aaron Paul, in particular, finally gets enough material to do something interesting and go toe-to-toe with his primary scene partner, eternal badass Thandiwe Newton. Elsewhere, a prophetic Bernard and surly Hemsworth balance each other as the “odd robot couple.”

The only performance that may leave you wanting more (at least in the first four episodes) is Wood’s Christina, a muted and mysterious character who wastes the actor’s sweetheart-to-sociopath range. We assume Christina will wow us eventually, but we’d like to get there sooner than the tail-end of Season 4.

Without slipping too deep into the spoiler zone, one rectification the series makes is by beginning with a seven-year time jump. This cleverly renders most of what happened in Season 3 as filler, allowing for the twists, turns, and timelines of Seasons 1 and 2 to be revisited and recalled upon.

The first two episodes of Westworld Season 4 may be a bit jarring as a result, however. For one, the aftermath of a Season 3’s AI revolution doesn’t seem that cataclysmic. Caleb’s life is peachy as a husband and father, and Westworld is still open to rich guests who want to shoot and screw their way through history. It’s one thing to reset the show’s tone, but it’s another to pretend Season 3 never happened.

Still, a time jump also allows the story to push past the whole “Oh! Humans don’t like to be controlled by algorithms? Who knew!” drone of Season 3, and instead rides back to the questions at the heart of Westworld: What makes a life worth protecting? Do people have free will in a data-driven, capitalist world? Should we be questioning the nature of our own reality?

The stakes in Season 4 also feel much higher and far more impactful than those of previous seasons. The humans of the future are in for a rude awakening that exponentially expands upon the memorable massacre of Westworld Season 1 and imbues the show with a sense of tension that was sorely missed from Season 3.

These violent delights will have violent ends, eventually. For now, we’re glad Westworld is taking us through the Maze once again.