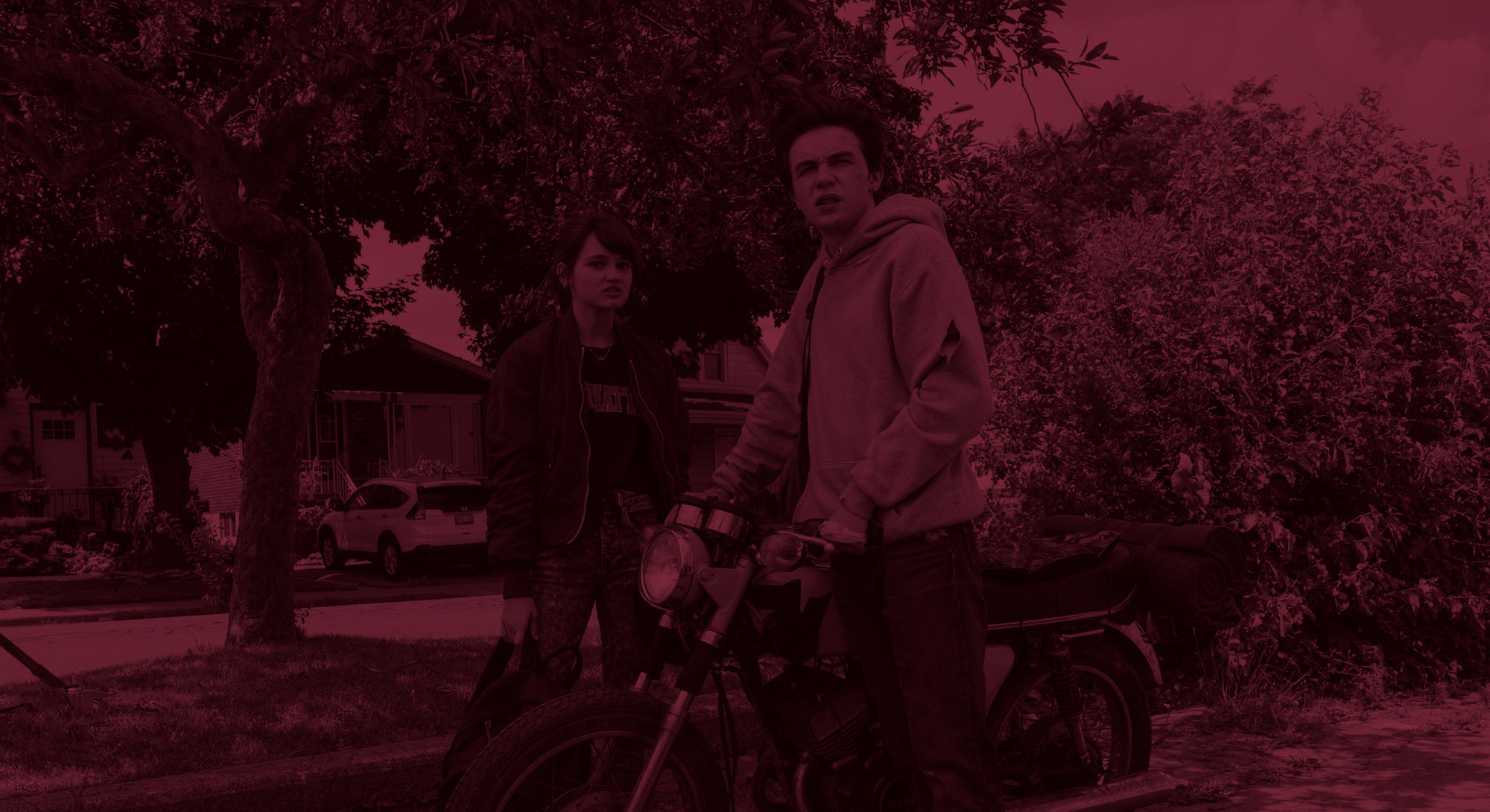 Wayne creator Shawn Simmons knows exactly where his teenaged Dirty Harry will end up — should the poor kid get a chance to break free from juvie in a yet-unordered Season 2.

“Oh, I already have a story,” the showrunner tells Inverse, sitting down with his stars Mark McKenna and Ciara Bravo for a (virtual) interview a few days after their YouTube original series made its big streaming move to Amazon Prime. “I already have Wayne’s story. I already have Del’s story. I know where everything's going.”

This isn’t hyperbole. Simmons — who, like his characters, hails from the hardscrabble town of Brockton, MA — brought the John Wick-meets-John Hughes series to his team at YouTube pretty much fully formed. In his original pitch, Season 1’s John Wick road trip bleeds into Unforgiven territory in Season 2, which could turn into Jack Reacher in Season 3.

“Everyone still laughs at me,” he says. “They’re like, You walked into the room, you talked for five hours and didn't stop, and then you left.” Eight days later, they had a 38-page show bible in hand — four beat sheets for every episode but the pilot, which was already done. (Simmons originally partnered with YouTube after they offered him the resources to make a pilot immediately, and promised they wouldn’t ask him to change a thing.)

WHO'S YOUR FAVORITE NEW TV CHARACTER IN 2020? TAKE THE INVERSE FAN-FAVORITES SURVEY!

Simmons’ confidence might have caught his Season 1 team by surprise, but the kernel of the character that would eventually become Wayne McCullough had been rattling around his head for decades. As a child, he watched an older neighborhood kid get pummeled by a group of bullies, only to clamber back to his feet once they finally got tired, throw a rock at their retreating backs, and have them pivot right back for round two.

The idea of "Dirty Harry in high school" always made him laugh, but even more, he wanted to see the kinds of hardscrabble kids he grew up with — and the places they came from — on TV.

“That scene stayed with me a long time,” he says. “[Brockton] was a tough town. There were a lot of kids that might not have had moms or dads, who had a chip on their shoulder, and a lot of pride.”

The memory of that neighborhood kid throwing rocks would eventually become Wayne’s opening scene. Still, it wasn’t until tonally ambitious comedies like Atlanta and Search Party starting showing up on cable television that Simmons, who had spent a decade writing on shows like Man Up! and Kirby Buckets, truly believed there might be hope for anything as wild as Wayne. “Then suddenly it was like, Oh, TV has gotten really fucking weird. I can write this now.”

“What I loved so much about the script originally was that I immediately recognized the characters,” Bravo tells Inverse, joining the call from her family’s home in Kentucky. “Del reminded me so much of my now-late grandmother, who just took no shit from anyone, and who was absolutely thriving in a man's world. You did not step to Janet in the same way that you do not step to Del.”

Her character, a fifteen-year-old girl-next-door who’s recently lost her mom to opioid addiction, has a few more social skills than Wayne, but no less well-honed a sense of hard-luck pride. Finding an actor who could do that, plus master the physical specificity of the Brockton accent, took ages, but when Bravo’s tape landed in his inbox, Simmons knew immediately she was the one.

McKenna came to his role much more gradually. Wayne was originally envisioned as a bigger, more punk rock character, but the Irish actor’s awkward Napoleon Dynamite charm won Simmons over. That Ireland, like Boston, is notorious for producing brawlers with their hearts on their sleeves didn’t hurt either.

“It’s just one of those places where people can get to the point of anger where, if they won’t fight you, they’ll just cry instead,” McKenna says, calling in from Dublin. “It was nice to be able to draw from where I’m from in such a specific way.”

Wayne himself doesn’t spend much of the first season crying, but as anyone who’s watched his pummeling hero’s journey to retrieve his dad's gold ‘79 Trans Am knows, it's not for lack of the world trying its hardest to make him. In Season 1, McKenna’s brawler hero loses his dad to cancer, gets beaten to a pulp (twice!) by Del’s dad and brothers, and is held at gunpoint multiple times by several psychopaths genuinely out to kill. At various other points we see him stab a hunting knife through his own hand, break his arm so badly the bones stick out, and get left for dead in the middle of a country road.

Actors aren’t their characters, of course, but McKenna embodies the series’ heart-on-his-sleeve, hard-luck hero so exquisitely, it’s easy to come away from the season’s brutal cliffhanger of a finale genuinely anxious about both Wayne’s and McKenna’s peace of mind. The same goes for Del, who Bravo plays with such fuck you, love me grit that it’s a challenge to separate her fate from the character's.

Much of this tension is, of course, by design. Wayne is a television show, and unresolved conflict is what keeps us watching. Also, for all that Wayne and Del’s romance plays around with some real chewy genre tropes (a little Evil Dead here, a little Ferris Bueller’s Day Off there) Wayne is still a story about broken people fighting to find a little island of peace. Catharsis has no business showing up until that story is much further along — even if it is 2020 and a solid victory over injustice is something we all might appreciate seeing.

And yet, while Simmons always envisioned Wayne as a multi-season saga, the cliffhanger at the end of “Buckle the F**k Up” wasn’t fully his idea. Network notes trickle down eventually, and sometimes, those same networks drop the axe before a story’s anywhere close to finished.

“The whole season’s about Wayne trying to go straight.”

This is what happened with the bulk of YouTube’s scripted original series when the streamer shifted to focus more on unscripted content late last year. For many of those series — Impulse; Step Up: High Water; Ryan Hansen Solves Crimes on Television — it meant an early death. For Cobra Kai, it meant an eleventh-hour pick-up by Netflix. In having its streaming rights scooped up by Amazon, Wayne finds itself in a kind of purgatory between the two: not yet dead, but not yet fully revived, either.

Which brings us back to Simmons’ master plan for what a second (and even third!) season of Wayne might look like, should Amazon give him the green light.

“I don’t think it gives too much away to say that Wayne’s in juvie,” Simmons says, cracking the lid an inch on the story he’s been meditating on since the final edits of Season 1. “Del’s in a place I’ll hold back on, but the whole season’s about Wayne trying to go straight, trying to earn back Del and find the peace he deserves.” Brockton would have a much bigger role to play in a second season story, he confirms, as would Del’s dad.

As for the time that’s passed since the first season originally wrapped: “It gets scary, when you detach yourself from it,” Simmons acknowledges, “because you’re not really living with those characters like they’re real people anymore.” Still, Amazon has put significantly more resources into promoting the show than it does most 2nd run pickups and seems to harbor real hope that it will perform well enough to merit a second season.

"The marketing team has been really enthusiastic and collaborative in a way that lets you know they care," Simmons says.

As a result, he's starting to think seriously about what Wayne Season 2 might look like at its new home on Amazon.

“It’s pulled me back into really thinking about all the stories," Simmons says. "Like, I cried when I was writing the [Season 2 pilot] back in 2019, and I'm [already] starting to get emotional thinking about certain moments we might get to do.”

“The first episode of Season 2 is probably the best of the Wayne saga.”

Moments, fans might wonder, like Wayne seeing Del again for the first time after he gets back from juvie?

Yes, that, exactly. But while Simmons manages to keep expertly mum about what other moments the season might feature, he’s apparently had no such compunction with McKenna or Bravo, both of whom have ended up on the receiving end of random texts full of juicy Season 2 secrets. Bravo lets slip there could be another great Mean Girls homage on its way, though she doesn’t give away what that might be. (“Fingers crossed we get a chance to make it!”) McKenna, for his part, gives nothing away.

Well, nothing to us. To Simmons, he gives away everything:

“The script that you have for the first episode of Season 2 is probably the best of the Wayne saga I've read,” he tells the showrunner, straight-up. “It would just be… very nice to be able to make it.”

The first season of Wayne is streaming now on Amazon Prime.