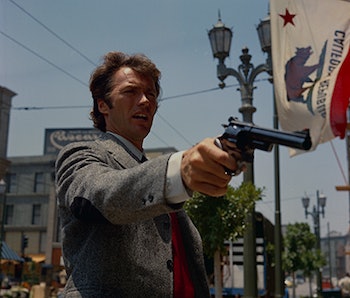 Just like politics, Hollywood attracts larger-than-life personalities, which is why it isn’t surprising that actor Clint Eastwood recently made politically-charged comments in an interview with Esquire that have rubbed some people the wrong way. In it, Eastwood — a longtime Republican who served as mayor of a small town in California for two years and lectured an empty chair at the 2012 Republican National Convention — declared his support for current Republican Presidential nominee Donald Trump, decried political correctness, and remarked that millennials are a “pussy generation.” They were pretty strong words, but anybody taken aback by Eastwood’s boastfully un-P.C. comments have obviously never seen a Clint Eastwood movie — and especially not a Dirty Harry movie.

The character was first introduced and became part of the pop culture lexicon in 1971’s Dirty Harry, a better-than-average cop drama loosely based on the real-life Zodiac killer, who terrorized the San Francisco Bay Area in the 1960s and early ‘70s. To free the movie from relying on the serial killer plot, Eastwood’s Callahan became the primary focus, as did his take-no-prisoners anti-hero image. Eastwood would go on to appear as the character in four other movies, including 1973’s Magnum Force.

The ultra-macho Callahan exists in a moral and ethical grey area, and he takes it upon himself to enact his own sense of justice in the face of what he sees is a systemically rigged bureaucracy. That basic justification runs through the series’ plethora of armed standoffs, which all inevitably feature Callahan fighting criminals with his trademark Smith & Wesson Model 29 .44 Magnum.

Callahan’s demeanor in most of these situations directly reflect Eastwood’s own political leanings, which he made pretty explicit in that Esquire interview.

“What Trump is onto is, he’s just saying what’s on his mind. And sometimes it’s not so good. And sometimes it’s … I mean, I can understand where he’s coming from, but I don’t always agree with it,” he told the magazine. Replace “Trump” with “Dirty Harry” and you wouldn’t have the change the sentiment one bit.

This kind of reasoning, about doing what you think is “right” regardless of whether it might impinge on the upstanding lives of others, is what has rocketed Trump to the top of the Republican ticket, especially since what he believes is pretty destructive. Trump, who has announced that he alone can fix the country’s problems as the “law and order” candidate, is a far less handsome and way more blustery version of Harry Callahan as presidential candidate. Trump’s moral vigilantism, mirrored in the Callahan character, is part of what made Eastwood all but endorse him.

Look at this quote: “[Trump’s] on to something, because secretly everybody’s getting tired of political correctness, kissing up. That’s the kiss-ass generation we’re in right now. We’re really in a pussy generation.”

It’s easier than ever here to make the connection between the strongman machismo of the candidate and the character. This is, after all, a series whose sequel begins with a simple static shot of Callahan’s gigantic gun, which then turns and fires at the audience. “We’re really in a pussy generation” is the best Dirty Harry quote he never said.

And Eastwood didn’t stop there.

“Everybody’s walking on eggshells. We see people accusing people of being racist and all kinds of stuff,” the actor said. “When I grew up, those things weren’t called racist.”

Callahan had his own conflicting views of race. He’d gladly mock African American robbers and threaten to blow their faces off, but also had a black partner on the force. Trump claims he’ll be better on race than President Obama, which gives you some idea of the contradictions within these men.

If Eastwood is a racist, then he’s also a racist that made a film like Gran Torino, where a grizzled bigot learns about tolerance when a Hmong family moves in next door, or a kingmaking biopic like Bird, which shows the trials and tribulations of jazz musician Charlie Parker.

He, like the most prominent character that he’s ever played, exists in a confusing moral vacuum, and their opinions will surely piss as many people off as find them admirable in the face of a complex world. He wants to kick ass and take names… while also being tolerant. “I don’t know what I am. I’m a little of everything,” Eastwood said in the interview. The sad part is that his working class hero Callahan schtick is something that bigot Donald Trump, a billionaire racist who would probably make for a great villain in one of the Dirty Harry films, can copy. This election day everyone in the pussy generation will have to answer one question: ‘Do I feel lucky?’ Well, do ya, punk?”