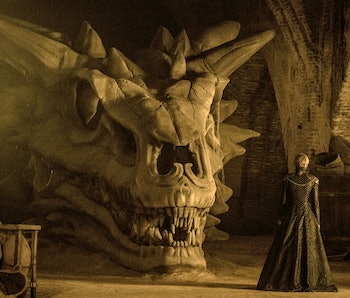 While we haven’t seen Vhagar or Belarion the Black Dread in House of the Dragon, we have seen Cersei Lannister ponder their massive skulls in Game of Thrones.

Most of the remains of the behemoth dragons that prowled the skies of Westeros during the peak of the Targaryen dynasty can be found beneath the ground of King’s Landing, preserved as symbolic reminders of the perils of power.

One of these skulls is also seen in Episode 1 of House of the Dragon, when King Viserys I Targaryen (Paddy Considine) tells his daughter Princess Rhaenyra Targaryen (Milly Alcock) about the prophecy of “a song of ice and fire.”

Belarion’s death predates the events of House of the Dragon, but Vhagar’s does not. Who is this mysterious dragon, why is Viserys concerned about her AWOL status in Episode 2, and why is she so important to the plot of HBO’s spinoff series?

In a disturbing scene in Episode 2 where Corlys Velaryon’s 12-year-old daughter, Lady Laena, tries to woo the middle-aged king, the conversation takes a detour to talk about (what else?) dragons. Lady Laena asks about the whereabouts of Vhagar — the oldest dragon currently in existence, and one who’s grown too big for the Dragonpit — and Viserys admits that he’s unsure where the creature has gotten off to.

This is a subtle but important departure from House of the Dragon’s source material, where Vhagar’s whereabouts are never in doubt, which could be teasing a big reveal coming later in the Game of Thrones spinoff. Luckily, George R. R. Martin’s writing lets us make an educated guess about Vhagar’s whereabouts and the timeline for her first appearance.

Why is Vhagar important?

Vhagar was born in 52 BC and died in 130 AC during the Targaryen civil war that House of the Dragon is set to portray (BC and AC, standing for Before Conquest and After Conquest, reference the Targaryen conquest of Westeros).

Vhagar, according to a Song of Ice and Fire calendar, is “bronze with greenish blue highlights and bright green eyes.” In the books, Tyrion Lannister says Vhagar was one of the oldest and largest dragons, with only Balerion rivaling her in size. She was also able to swallow a horse whole, and could reportedly cook a knight inside his armor. It’s no wonder Viserys is worried about her being missing.

Several characters have ridden Vhagar, including Baelon Targaryen, the father of King Viserys. Vhagar’s last known riders will be introduced in Season 1 of House of the Dragon — Lady Laena Velaryon and Prince Aemond Targaryen, the second son of Viserys and Alicent.

The books are unclear on how Vhagar winds up with Laena, but we do know that Laena was around 12 when she bonds with the dragon. Curiously, this is the same age as when we see her in Episode 2, so there may be news on the Vhagar front soon.

Who rides Vhagar during the Targaryen civil war?

Around 120 AC, after Laena’s tragic death during childbirth, Vhagar was claimed by Prince Aemond when he was 10. When the Dance of the Dragons begins in 129 AC, Vhagar had grown almost as large as Balerion, making her the largest dragon of the era. Early in the civil war, Aemond slays his nephew Lucerys’ dragon, Arrax. Vhagar and Aemond, along with King Aegon II Targaryen and his dragon, Sunfyre, then slay the dragon Meleys and her dragonrider, Princess Rhaenys Targaryen.

The battle between the three dragons scars Aegon II, making him unfit to rule. The iron-fisted Prince Aemond is appointed regent, and he soon decides the main threat to the throne is Prince Daemon Targaryen (Matt Smith). Aemond goes to Harrenhal, the largest castle in all of Westeros, to confront Daemon, but finds it empty. Daemon had set a trap to ensure that King’s Landing was left without its king and dragons so it could finally fall to Rhaenyra.

With the throne lost, Aemond responds by going on a rampage throughout the Riverlands, prompting Daemon and his dragon, Caraxes, to hunt Aemond and Vhagar down. The battle that results is a dramatic one that ultimately kills Aemondm, his lover, and the storied 181-year-old Vhagar.

All of this is to say that we should expect to see Vhagar on-screen soon and, when we do, she and her rider will be responsible for some of House of the Dragon’s most epic battles. Just why Vhagar is missing is a mystery, but she and her riders will make their mark on Westeros before too long.

See dragons soar in House of the Dragon, airing Sunday nights on HBO.