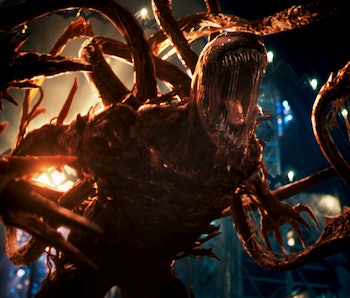 Who wants ketchup? Sony just served a heaping portion of Venom: Let There Be Carnage, with the first trailer for the sequel to the 2018 hit Venom.

This time around, Tom Hardy’s Eddie Brock and Venom are in something resembling harmony. The timing couldn’t be better, as the duo comes face to gooey face with serial killer Cletus Kasady (Woody Harrelson), who is possessed by an alternate, dangerous strain of the symbiote.

If you look closely, though, fans may see some possible connections to the Marvel Cinematic Universe. Here’s what lies ahead in Venom: Let There Be Carnage.

What Happened? — On Monday, Sony Pictures released the trailer to Venom: Let There Be Carnage, directed by motion-capture legend Andy Serkis, taking over from 2018’s Venom director Ruben Fleischer. After an impressive box office performance over two years ago, the movie kicked off what Sony hopes to be a shared universe of Marvel characters from Spider-Man’s comics without Spider-Man.

Picking up from the post-credits of Venom, the new film introduces Woody Harrelson as Cletus Kasady, a serial killer possessed by another symbiote that turns him into the blood-red monster, Carnage.

“Welcome back, Eddie Brock. It’s been a long time,” a wig-free Cletus says in a chilling tone. “We’ve missed you. So much.”

Based on what we can see from the trailer, the execution of Cletus goes awry when his symbiote fights back, allowing him to break free, leaving Venom the only one who can stop him. Sadly for fans, there is no surprise cameo (unlike in the trailer to Morbius), so don’t hold your breath for Tom Holland’s Spider-Man to swing in to save the day. If anything, Cletus demonstrates how unafraid of web-slingers he is when he squishes a spider in his hand.

Still, that doesn’t mean there aren’t possible connections to the Marvel Cinematic Universe.

Welcome to Ravencroft — Venom: Let There Be Carnage partially takes place in Ravencroft, a maximum-security asylum chiefly associated with Spider-Man’s universe. In the comics, Spidey foes like Doc Ock, Electro, Green Goblin, Mysterio, Vulture, and more have been taken in by the asylum, functioning in the same way Arkham Asylum does for Batman.

Ravencroft makes its cinematic debut in Venom: Let There Be Carnage and has not previously appeared in any films of the Marvel Cinematic Universe. (In the MCU, locations like Seagate Prison and The Raft have been places where the MCU harbors its most serious villains.) But the aforementioned Morbius, which appears to have Michael Keaton reprising his role as Vulture from 2017’s Spider-Man: Homecoming, is a probable start to an assembly of Spidey villains.

Not for nothing, but the upcoming Spider-Man: No Way Home will also explore the multiverse with past screen villains like Electro (Jamie Foxx, from The Amazing Spider-Man 2) and Doc Ock (Alfred Molina, from Spider-Man 2) also returning to the screen. While the Venom films do not take place in the MCU, No Way Home is just one interdimensional portal away from bridging that gap.

Again, this is pure speculation but the inclusion of Ravencroft in Venom: Let There Be Carnage may signal a physical nexus for Spider-Man villains to get together. From there, it’s only a matter of time before they collectively come up with the bright idea of teaming up to take down Spider-Man, thus forming the infamous Sinister Six at last.

The Inverse Analysis — It’s an exciting time to be a Spider-Man fan. Spider-Man: No Way Home is about to be one of the most fan-pleasing superhero movies of all time as an impossible crossover of several different eras of Spider-Man. And with other associated characters like Morbius (delayed to January 2022 due to the Covid-19 pandemic) and Venom: Let There Be Carnage, the multiverse is only getting bigger. Exactly how these disparate universes may connect remains to be seen, but there will no doubt be some serious carnage left in its wake.

Venom: Let There Be Carnage will be released in theaters on September 24.